One of the recurring questions during AML interviews is whether you ever took a hiatus from the hobby due to "cars and girls." Well, I've got a Missus (so no girl distractions, of course), but I will admit lately to a car distraction. Between that and my usual busy time at work, my modeling time has suffered a bit.

But with a long weekend coming up, I decided to get my feet wet again with something fun and quick - labeling my throttles!

Now, before you think me TOO crazy, just remember that for somebody with undiagnosed - but occasionally severe - OCD, labeling things is always a good time. Bonus if the labeling is actually helpful & useful.

Soooo..... since I'd noticed during my operating sessions that folks would often ask me how to turn on my NCE radio throttles (either because they're unfamiliar with NCE or they just forgot), I figured I'd just put the directions right on the back . . . 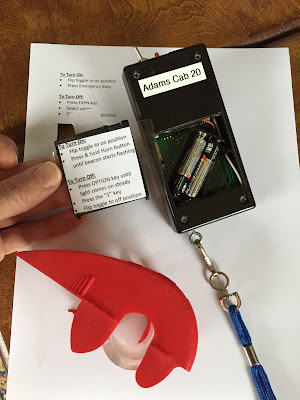 For a large "label" like this, I just typed up and printed out the instructions using Word, and then affixed it to the back with clear packing tape. 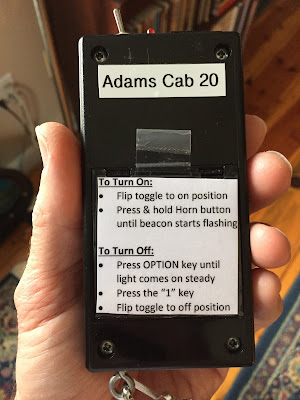 This is the back of the NCE Cab04pr radio throttle, outfitted with a handy-dandy on-off toggle that I installed myself when I removed the external whippy antenna and substituted an internal wire antenna. I also added a piece of Scotch tape to keep the back attached and make it easier to remove as well. 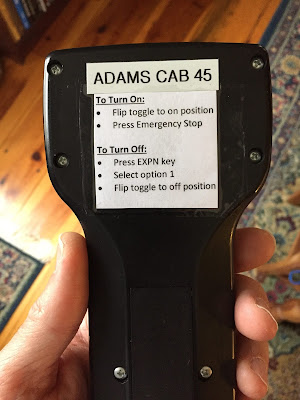 And here is a similar label on the back of an NCE ProCab throttle (actually, this one is the PowerCab, but the layout is the same). Craig Bisgeier gets the prize for being the first to ask "What Toggle?" when I posted this photo earlier today on the Valley Local Facebook Page (you do know that there's now a FB group for the layout, don't you? Be sure to check it out and join!).

Truth is that, in my eagerness to stick the label on the back of a dogbone throttle, I grabbed the first one on-hand, not realizing until afterwards that I'd grabbed the wired/tethered PowerCab throttle instead of the wireless ProCab. No worries - I just peeled off the label and put it on the correct throttle. 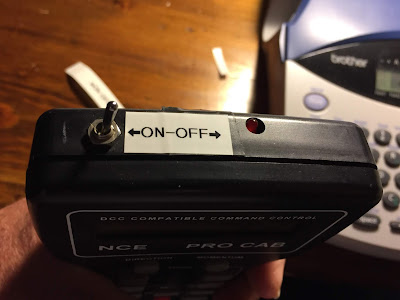 Speaking of which, here is the actual ProCab throttle with the noted toggle. Like with the Cab04pr, I removed the whippy antenna, installed an internal wire antenna, and also installed an on/off toggle to save battery life. Click here for that project.

And since my new instructions mentioned flipping the toggle to the "on"position - and since that's not entirely intuitive on the throttles themselves - I used my favoritist OCD tool to make some labels (thanks again to RomanD for the labeler loan!).

Just a matter of typing out three labels together, cutting them out, an putting them on the throttles near the toggles. 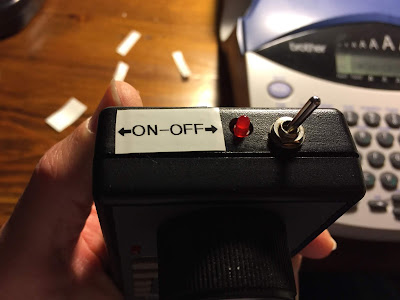 Now that that fun is done, I've got a bit of motivation to make some more progress on my other layout projects. After my recent distraction, I discovered very quickly that model railroading is a lot less expensive than racing cars. Heck, for the price of a larger intercooler, I could treat myself to another brass steam locomotive . . . . Hmmmmm . . .

Happy Friday!
Posted by Chris Adams at 9:02 AM