Long-time readers may recall that an essay by Tony Koester - describing a photograph by Kent Cochrane - was one of the primary inspirations for my modeling the Valley Line. The photo showed the southbound Valley Local, shot from "model railroader's perspective," entering Middletown. But it was Tony's prose that really brought the photo to life. Click here for that story.

The reason I mention this now is to provide just one example of how big a fan I am of Tony's long-running "Trains of Thought" column in Model Railroader magazine. He has a way of putting into words some of the more cerebral aspects of our hobby and, whether you agree with his perspectives or not, he never fails to make you think. I don't know exactly when he first started the column, but I can guarantee you that I've read & enjoyed every one. Heh - I've even attempted a (an?) homage to his idea on my website.

So imagine my surprise when I got the latest (May) issue of Model Railroader. 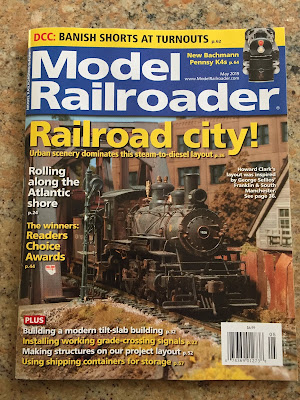 As is my custom, I always start reading from the back - where "Trains of Thought" appears. 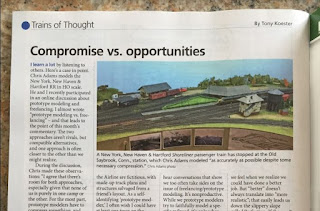 And there was a photo of Old Saybrook - from my layout! Even better, he relayed a conversation that he and I had a while ago talking about the so-called "debate" between Prototype Modeling & Freelancing (Spoiler Alert: There isn't as much difference as you think). Seeing my name in Model Railroader was a real treat, but seeing it in "Trains of Thought" was especially cool.

If you don't get MR, I hope you'll at least get this copy - even better if you chime in with YOUR train of thought on the topic of "Compromise vs. Opportunities." Whether you fancy yourself a freelancer or a "true" prototype modeler, there's lots here to mull over - and you might be surprised to discover that you're probably a little bit of both.
Posted by Chris Adams at 12:01 AM