I mentioned a couple posts ago the critical role Alco's DL-109 (New Haven RR class DER-1) plays in Shoreline operations. What I didn't mention is an annoying habit they have of shutting down when they're acquired, at least when equipped with an ESU decoder.

But before I get into that, here's a quick tip:

Before you go buying something new like, say, a set of underset couplers, be sure you check your supplies first - even if you don't think you have what you need. 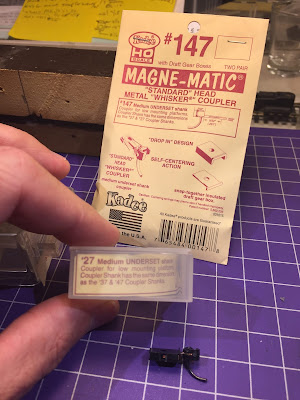 Yup - you guessed it. I went through all that rigmarole of not wanting to wait to get underset couplers for my DL-109s, then making a special trip to get them, and then trying them out not only to discover that they weren't going to work out after all but also that it turns out I already had some on-hand that I could have tried.

And worse - they were right in my coupler drawer(!)

Sure, they're #27s rather than #147s, but the only actual difference is that the 27s have the old centering spring and the 147s have the centering whiskers.

Ah well. Anybody need underset couplers? I have a bunch. Apparently.

And now for some DCC fun!

All of my DL-109s are equipped with ESU sound decoders. Not only do they have excellent motor control, but the sounds are very customizable, especially when using the Lokprogrammer. In fact, I've even programmed each decoder in each separate loco to have slightly different engine speeds/sounds so they haven't any chance of phasing together. Trust me - that's no small feat when each DL-109 has two different engines under its hood.

So, the sound in these engines is really amazing. But there's a problem. My Shoreline/mainline operations require a staging yard operator at each end of the line. When a train is ready to go through the Saybrook Scene - say, westbound from New London staging to New Haven staging - the New London operator calls the New Haven operator to tell him what engines are on the train that's going to him. The New Haven operator then acquires those engines to operate the train - "bringing" the train toward himself through Saybrook. I figured that's the best way to make sure the train noses into the correct staging track at its destination and stops safely.

But the acquiring is the problem. Every time the operator acquires the locomotives, the sound shuts down. It doesn't just turn off, but it goes through the whole (and very cool, under other circumstances) shut-down routine. Then the engines have to be "started up" again (another routine). All that takes time - which is none too plentiful on the Shoreline.

At the last operating session though, someone - I think Roman - came up with the solution: "Just change F8 to 'not F8'"

But it's a bit counter-intuitive. Reprogramming F8 to "not F8" is how you turn the sound on by default. Fortunately, this is all easy-peasy with the ESU Lokprogrammer . . . 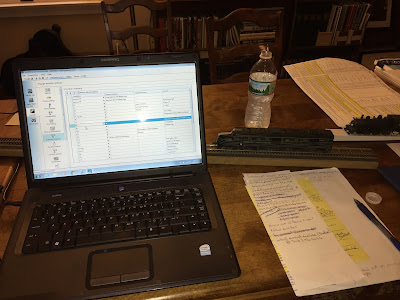 First step is to go into the "Function mapping" section: 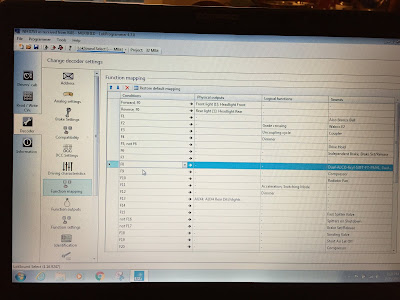 On that screen, go down to F8 (I'm assuming the decoder has its factory setting of F8 turning the prime mover on and off). 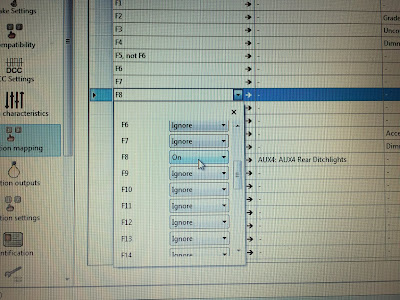 The factory setting for F8 is to be "On" as you see above. Just change it to "Off" 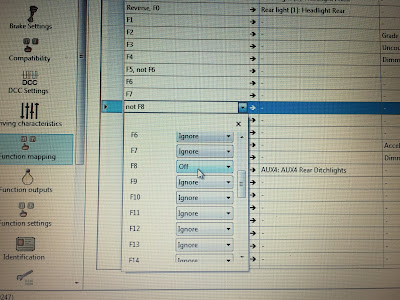 Note that F8 now says "not F8" and write the change to the decoder: 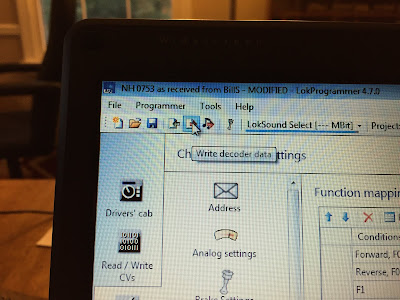 You may need to wait for firmware to update as well. 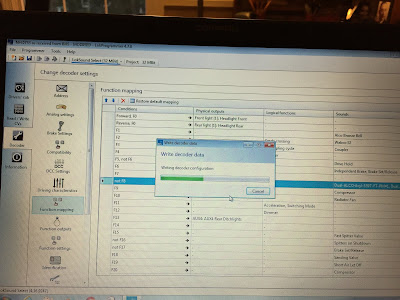 And that's it! No more annoying prime mover shut-down when my Shoreline operators acquire their power. Happy Day!

Well, so it was until I realized why one of my DLs decided not to work allofasudden...

I would get sound, but no movement. This unit had acted erratically before so I thought the decoder might need a reset and reload. That helped, but after a little bit the engine refuse to move at all  (though the sounds all still worked flawlessly).

When I removed the shell and checked out the decoder, what I'd feared was what I found . . . 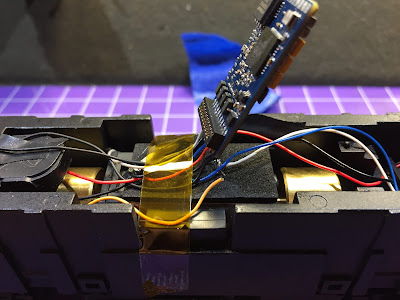 The orange motor wire had broken off of the decoder. No wonder the engine wouldn't move!

After a LOT of hemming and hawing over how difficult - if not impossible - it would be to resolder such a tiny wire in such a tiny space (without frying, melting, or otherwise destroying the decoder in the process), I figured it was high time to tackle the job and not wait for when a more-experienced friend could help me out. I'd just done my first hardwire decoder install last fall, and that was soldering lots of wires to a harness. Not this: 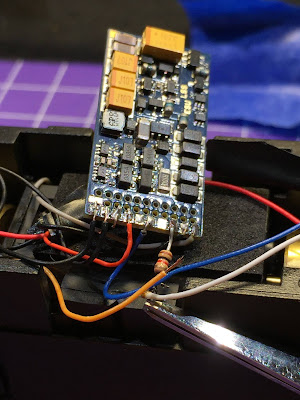 Yeah - the orange wire had to be soldered to the third pad from the left. But I stripped the insulation back a bit, fluxed and tinned the wire, and then fluxed the pad as well as the tinned wire.

I really wished I had a smaller soldering tip, but I secured the decoder with self-clamping tweezers, used another pair of tweezers to hold the wire and used my remaining hand to get the iron in and out quick. 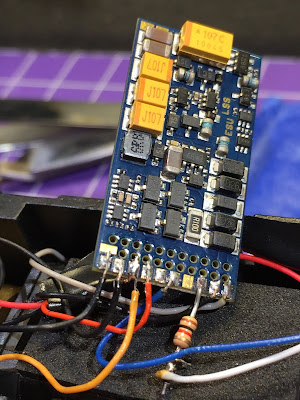 Thankfully, after sweating a few buckets, it all turned out well - as you can see above (I cleaned off the flux with denatured alcohol). I put everything back together and - Voila! - the engine runs again.

It's super satisfying to be confronted with a problem and figure out a way to solve it. And it's especially nice when your skills start developing to the point that you have to rely less and less on others.

I look forward to the day when I can say that about scenery. %^) In the meantime, I'll trade the skills I have with someone who needs them - and who hopefully has some expertise *I* need. That sort of collaboration is yet another reason this hobby is one of the world's best.
Posted by Chris Adams at 8:16 PM