Thanks to Stanley and Roger for commenting on my paperwork post. I'm still trying to figure the best approach here, but in the meantime at least here's a copy of the prototype NHRR paperwork my form is based on: 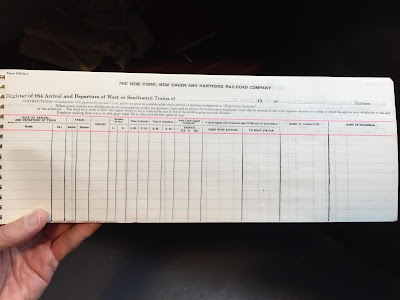 Now, granted, I think this is a form used by station agents/tower operators to record passing trains (as Stanley described in his comment) and I modified it for use on my railroad. But it probably is overkill.

* * *
Thanks also to Dave who, while not posting a comment to the blog, did weigh in on the DL-109 coupler conversion - suggesting that I try using one of KD's underset couplers to raise the coupler height while saving me some work. While I'd mentioned in the post that I thought an underset coupler would look bad, I was too impatient to wait for one to be delivered, and it would probably end up too high anyway, I picked up a package of #147 couplers at Centerline Hobbies in Hyannis on my way home from vacation this weekend.

So at least I wouldn't have to wait for them.

Unfortunately, when I got them home I realized that I didn't get the "scale" head couplers but the old "standard" head (i.e. like the old No. 5s). The one consolation was that I made no mistake - KD doesn't even make a "scale" size underset coupler. In fact, they actually say so on their website:

I figured I'd go ahead and try the 147s anyway since, if they truly just dropped in as an easy replacement, it'd save me some drilling & tapping. 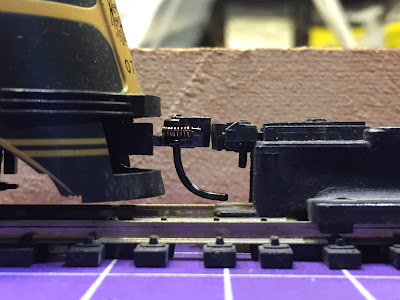 Turns out - they did end up too high. No worries. As they say in the scientific field: "A negative finding is still a finding." I did the experiment and it proved my initial hypothesis. Back to drilling, tapping, and installing a "proper" "scale" head coupler: