I went all-in for DCC with the purchase of a 5 Amp NCE PowerPRO wireless system and a few decoders way back in the spring of 2003. Two of those decoders were PCB-drop in replacement boards and two were plain decoders with the loose wires. I "installed" the drop-ins (which was so easy I don't really count them as "installs") but the other decoders are still sitting in their original packaging(!)

Back then, there wasn't much in the way of sound decoders - and the four I got then were drive-only. I've since gotten VERY much into DCC-sound and, while I have some amazing friends that have done sound installs for me in the past, it was high time I learned how to do them myself.

So, I decided my first sound conversion would be an old Proto 1000 New Haven DL-109 that I'd converted back in '03 with a Digitrax drop-in motor only decoder. Since I knew it had run on DCC before, I figured it'd be a good candidate (i.e. I didn't have to worry about isolating the motor), but it hasn't run right for a long time, and I blamed the decoder. I figured a Loksound Select, with its superior motor control, would fix things. Unfortunately, I found out too late it probably wasn't a bad decoder after all. But I finished my conversion before I figured that out . . . 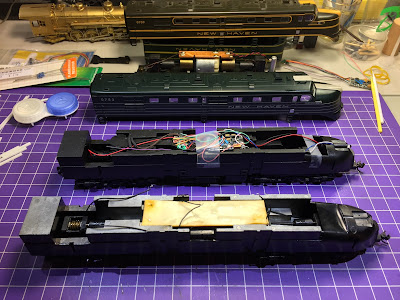 First step was to remove the old decoder. The photo above shows my engine in the front, with the decoder removed, revealing the old double-sided foam tape and wire pigtails. The engine behind is my buddy Pete's conversion I used as a guide. His DL-109 is a later production run (Walthers Proto, rather than P1k). 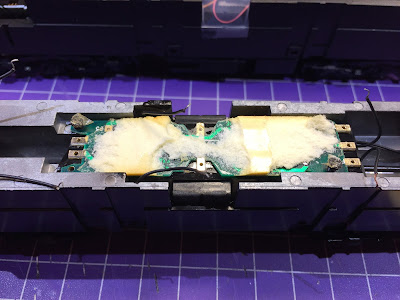 Removing the foam tape revealed the old PCB that I apparently used as a platform. While not quite a drop-in replacement, all I had to do way back when was disconnect the wires from the original PCB and reconnect them to the then-new decoder. 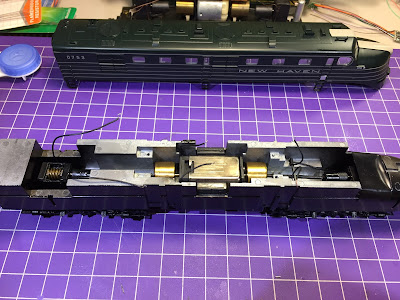 Here's what the chassis looks like after the PCB is removed. Note mounting screw locations for the PCB. 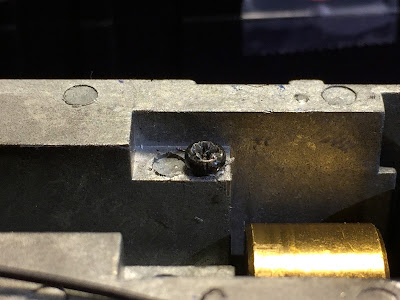 Here's a closeup of one of the mounts. Pete had a great idea of using that screw mount as a way to attach the iPhone speaker he used in his install. 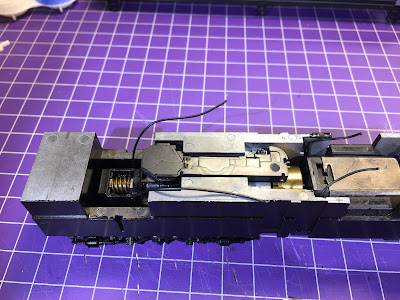 I decided to do the same. The screw has a thread diameter of .076" so a clearance hole drilled through the speaker mount would require a #50 drill bit. I had a #48 on-hand - slightly larger, but ok for this. As always, you can click on the photo for a larger/closer view. As you can see, the iPhone speaker fits perfectly, with no metal removal needed.


ProTip: If possible, test your decoder and speaker before you install them. You want to be sure that, if they don't work when you're done, it's not because they were bad to begin with. I used this decoder/speaker tester and love it. 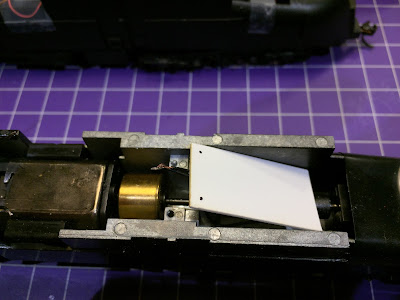 Since the speaker was securely mounted with a screw, I decided to mount the decoder similarly. But first I had to make a little platform using .030" styrene - 3/4"x1.5". Here I've marked where I have to drill holes for the screw mount and to clear the mounting lug on the other side. 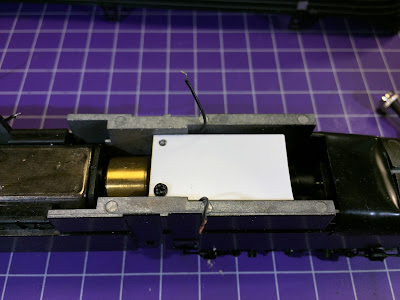 And here it is screwed in and ready for the decoder. 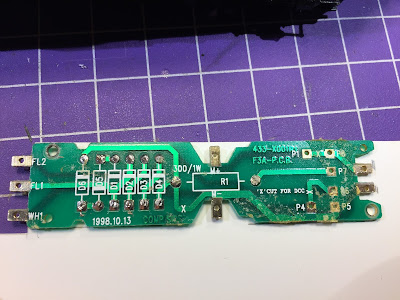 It then occurred to me that a longer mount/platform would keep all the wires from contacting the motor and/or getting tangled up. So I decided to make a new mount using the old PCB as a template.

Make sure you don't make the same mistake I did - be sure and add extra length so that the decoder will be further from the motor (I didn't want to have to worry about too much heat in one place). 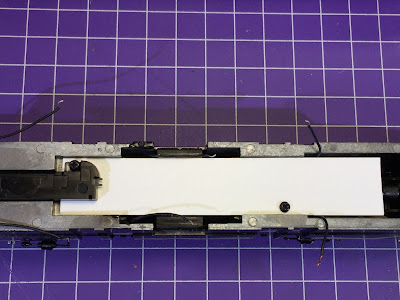 Here's the longer mount, screwed in at both mounting points and with the speaker attached. 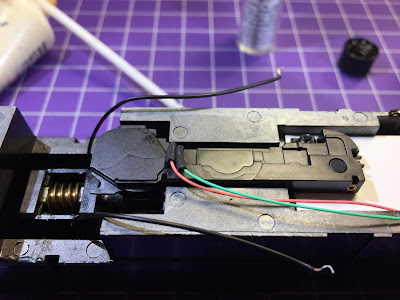 I next added pigtail wires to the speaker terminals. Just using one speaker, you don't have to worry about polarity - but you do want to make sure the terminals/wire ends don't touch each other. Small bits of shrink tubing made everything safe. Since the brown speaker wires from the decoder wouldn't reach the terminals on the speaker (they may have had I mounted the speaker closer - may try that next time!), I cut off and used bits of the turquoise and pink wires which I wouldn't be using for this engine.

For me, the key to doing such TINY soldering is to do the following: 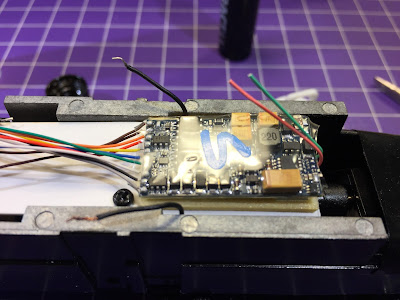 Here's the decoder mounted with double-sided foam tape (same roll I used in '03!) at the other end of the platform. Note snipped turquoise and pink wires which will be secured later.

So much for the physically hard part of the install, figuring out where to put the decoder and speaker and mounting them. Next came the mentally hard part - soldering the proper wires together. Unfortunately, on this old production unit all the wires were the same black color(!) So I had to be careful to trace where each wire was connected and be sure to solder to the proper wire. I assumed that the left side of the motor would connect to the left side of the trucks. 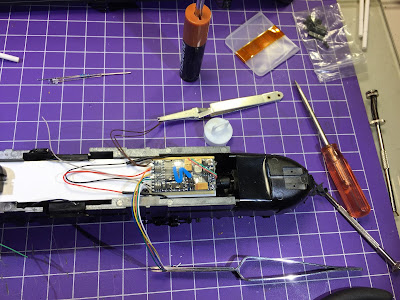 Managing so many wires during the install was a bit of pain. But I stumbled on this helpful use of clamping tweezers. They acted as little anchors to keep wires out of the way of the ones I was soldering.


ProTip: Careful observers will notice a big mistake in my work so far. I was good about soldering the black and red decoder wires to the proper wires coming from the trucks (which were both black - argh!); unfortunately, I only soldered the decoder wires to the front truck! I was so focused on soldering the proper wires together that I totally forgot I had to connect the rear truck to the same decoder wires - Ooops! So I got my first lesson/experience in cutting (gasp!) my shrink tubing, disconnecting my nicely-soldered wires, and then soldering all three wires together at once (1 decoder wire and 2 truck wires per side). 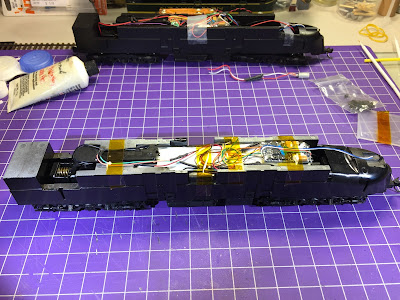 Since I had to think my way through this install and made a few mistakes along the way I had to correct, it took me a few hours to finish. But I think it looks pretty darn good for my first install. I used Kapton tape to secure everything (unlike scotch tape or electrical tape, it's heat resistant), put it on my programming track (since the lower voltage wouldn't fry my decoder if I wired something wrong), and did a decoder read. Everything check out ok!

Then I went to run it. It runs LOUSY.  BIG Rookie Mistake - I should have tested this engine on straight DC after removing the old Digitrax decoder to ensure that it was operating flawlessly (like my other P1k DLs) before installing the new decoder. Even with the Loksound, it runs as poorly as it did before. Unfortunately, I can't even get it to run long enough to do a CV54=0 BEMF adjustment - not that that would actually solve anything. I cleaned the wheels (another rookie mistake - should have done that before, when I should have been running it on DC!), but still no improvement.

So, I'm not sure what I'm gonna do at this point. Probably have to UNinstall this decoder and test it on DC as I should have before. Only then will I be able to isolate what the mechanical problem(s) is/are. But before I gin up myself to do any undoing, I've decided to do a couple more installs while I've got my courage (but I'll be sure to test on DC first.....)
Posted by Chris Adams at 1:01 PM