As I mentioned earlier, at my last ops session it became quite apparent that the Shoreline/mainline trains - which had always been planned as bit players in the grand scheme - are starting to upstage the marquee actors. It's just really cool to see the parade roaring by on the mainline through Saybrook, all in stark contrast to the sleepy branchline locals.

While there were 71 trains through Old Saybrook during a typical day, I certainly don't have to model them all. I never plan to replicate a full 24hr period, and - in fact - could get by with just four mainline trains if I focus only mid-day, when the 2 Shoreline locals were scheduled to be in town. The problem with limiting my ops session to mid-day though is that my session would have the Airline and Valley locals operating for 1-2 real hours before the Shorelines locals would ever start and enter the scene at Saybrook.

So, for now, I'm experimenting with starting all the locals at the same time - 7am. That results in the Shoreline locals getting into Saybrook in the morning rather than midday - not prototypically perfect, but certainly plausible. And if I want to continue running the Shoreline trains until the last local typically leaves Saybrook for the day, I need to be prepared to run all the trains through town from 7am until 7:42pm at the latest. That's 33 trains, not counting the 2 locals(!).

What does that all mean? You guessed it - MORE STAGING!

Now, there's no way I can expand the staging yard at the west end of the Shoreline (New Haven/New York). As you can see here, I'm pretty well hemmed in and have only 4 tracks 8'3" long. So I needed at least to expand where I could - the east end staging yard (New London/Boston). 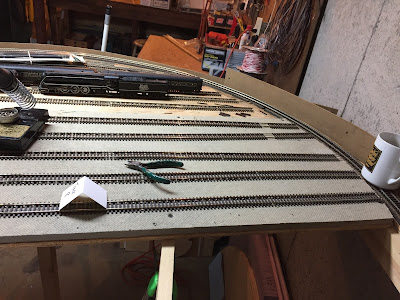 The pic above shows my main motivation for focusing on this yard (heh - other than the fact that I really had no other choice) - I spaced the track VERY far apart for ease-of-access. But many subsequent ops sessions confirmed that space could be put to better use - more tracks! To orient you, the staging yard is on homasote and those tracks in the background are for storage only and mounted directly to the plywood. 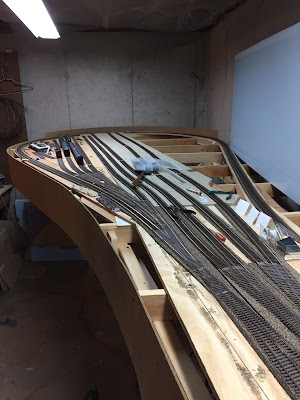 The photo above shows the expansion in-progress. I've already moved 3 staging tracks all the way over to the left (aisle side) edge of the homasote (the 4 tracks further to the left are storage only). Moving the staging tracks resulted in a slight, broad S curve, but I - and more importantly, the equipment - can live with that to shoehorn more tracks in. Look at all that real estate opening up! 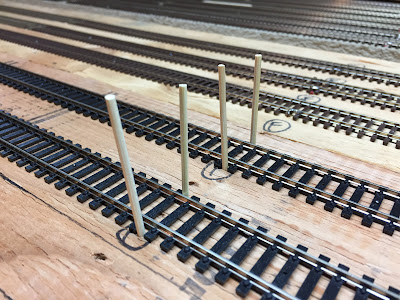 Before I could move the tracks over, I had to unsolder the feeders. And when I went to reattach the feeders, I had to drill new holes at the new location. Since I'd be threading the ends of the feeders up through the bottom of the layout, I came up with the idea above to keep track of the proper holes. 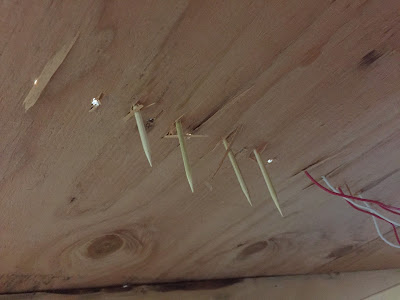 As you can see, from underneath the layout it's really hard to tell which holes are the right ones. But these little skewers make it obvious. 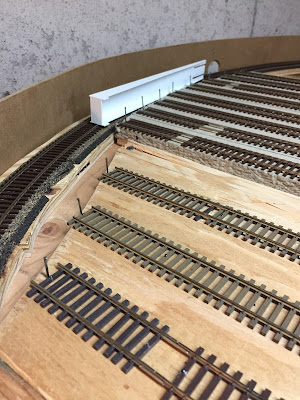 In the post on my last ops session, I mentioned needing bumping posts at the end of the staging tracks (my engines have pretty high momentum and a few have Keep Alive circuits. 'nuff said). Here you can see clearly why they're necessary - and you can see my stingy cheap thrifty way of solving the problem.

As I've mentioned before, the east end staging yard was originally conceived as only a place where Shoreline local PDX-2 (New London/East Haddam/Cedar Hill) could originate off-stage.

And as you can see in the pic above, it was more than adequate for that lone purpose. But once I discovered all the cool Shoreline traffic (not to mention having a beautiful Saybrook scene to run it through), and decided to expand it 11 months ago (see post here), there was no turning back.

Yeah, that photo above is what the yard looks like as of today. Big difference from last February. By narrowing the track centers to 2", I was able to add three more staging tracks - including a dedicated "PDX-1 receiving track" coming off the main near the east end of Track 6. And BONUS! I had a turnout leftover, so I added yet another track to the storage yard over there on the left (as well as rerailers at the end of two of those tracks to facilitate adding cars to the layout).

Certainly a significant expansion, by any measure. But now truly maxed out. Don't even mention that "vacant" space to the right, near the wall. I want to keep that open for access.


So what's all this time and effort do for me? Well, I'm hoping that it'll make it easier to run those 33 trains I'd like to run. The next step is to see if it actually does.
Posted by Chris Adams at 12:30 AM