If you're reading this blog, you're probably a model railroader. But what about being a "railroad modeler?" What's so attractive about modeling a prototype railroad and becoming a prototype modeler? I suspect, for most, the chance to build a time-machine of sorts is the strongest attraction. For others, it's the challenge of recreating a real-world scene in miniature, including all the research and detective work required.

As you may have guessed, for me it's a combination of all those things. I could sit and stare at some old railroad photographs for hours, noticing all the details and thinking of ways I can recreate the world captured in that photo. One of my favorite photos - and the one that provided the strongest inspiration to model the Valley Line - was a shot of the southbound Valley Local taken by Kent Cochrane from the Arrigoni Bridge in Middletown, May 1947. 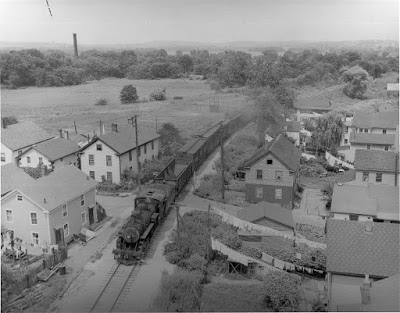 This shot was actually the subject of my very first "Wordless Wednesday", and I talked about it some more in a subsequent post (and here, and here). I'm not alone in my admiration either. None other than Tony Koester "unpacked" this photo in the May, 1980 issue of Railroad Model Craftsman. His power of observation and his ability to convey the essence of the scene through his writing really puts you right there as the local pulls into town. I highly recommend you read his essay - it's the sort of thing that could inspire many a modeler. The fact that he (unwittingly, preceding my interest by about 30 years) wrote about a scene from my chosen prototype is a huge bonus.

It's all very right-brained and evocative. What he didn't do is provide much in the way of prototype information. As an admitted left-brainer (just look at my layout - the wiring and track is great. The scenery is mostly done by others...) and prototype modeler, I see a hopper. And wonder how to model it.

And according to my buddy Randy, these were USRA triple hoppers, lot 466-H. The rebuilding replaced the center clamshell hopper with a sawtooth hopper. There were originally about 20,000 of these cars owned by the NYC and the P&LE. 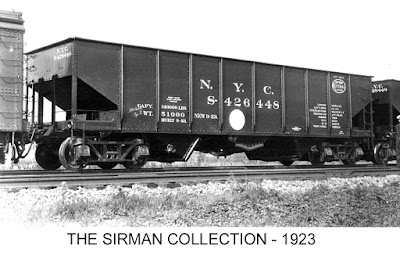 And a plan showing the differences: 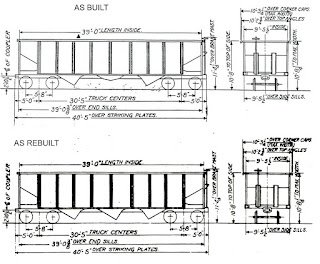 Ok, admittedly, all that information isn't quite as enjoyable to read as Tony's piece. But if you want to model the Valley Local - at least as it appeared in the spring of 1947 - you're gonna want to include a NYC hopper. And if you want it to be prototypically correct, well, now you know what you need.

All I need now are "a half-dozen or so freight cars" to model the rest of the train, but at least I can be pretty certain they're "more than likely bedecked in nothing more spectacular than standard boxcar red paint accented with weathered white lettering." Maybe not enough information to model from, but most definitely enough brain-candy to want to try.

And maybe that's part of what makes this hobby so fascinating and satisfying. To do it well, you really need both the right and left sides of your brain fully engaged. The technical side of modeling isn't as much fun without the evocative side to inspire your efforts.

Thanks to Kent Cochrane for taking that beautiful photo so long ago, thanks to Tony Koester for helping me see all the fine detail that's there to recreate, and thanks to Westerfield models for producing a kit for the first freight car in my own recreation of the Valley Local in HO scale.
Posted by Chris Adams at 12:01 AM