While I have a wifi throttle server installed on my layout, I don't have enough physical throttles to handle all the trains I have nowadays. So, I ask folks to bring their own throttles if they're willing (and if they have NCE) and it's also nice to have backups in case a throttle dies during the session (as happened to me last year).

My most-recent ops session highlighted another need though: the need to know the addresses on each of my throttles (aka "cab addresses" or "Cab ID"). If a throttle has the same ID as another throttle, strange conflicts happen. So every throttle must have its own unique ID and if there's any duplication, as the ops session host you should change your throttle addresses to accommodate the folks who were kind enough to bring their throttles to supplement your stash (you can of course change them back after the session).

But to do all that, you first need to know what your cab addresses are - for NCE, that's a simple matter of plugging in the throttle and noting the CabID (that pops up and disappears quickly) on the screen. And then, if your memory is at all like mine, you should place a listing of said IDs in a prominent place. Thus:
While you're at it, you may want to put an address label on the back of each throttle - that way, you know the ID for when you take it to another's layout...

As you can probably tell from recent posts, I've poked my head down the rabbit hole of layout/model photography. And while I built a great tripod for holding my P&S digital camera - and it'll even hold my iPhone securely - it still doesn't allow me to take those true "eye level" photos.

But as luck would have it, the model railroad press has published not one, but TWO great articles on smartphone layout photography this month. Lance Mindheim did an extensive article in Model Railroad Hobbyist, and Pelle Soeborg has an article in Model Railroader. While Lance's article goes into great detail about focus stacking (which I'm really looking forward to trying), Pelle's article has a great tip for how to secure your smartphone to make it easier to take such photos: 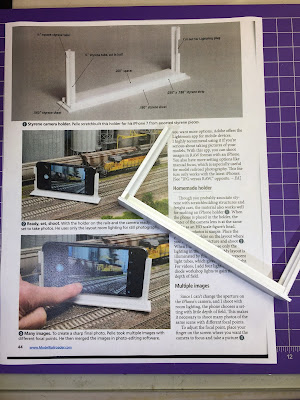 He used pieces of styrene strip, 1/8" square tube, and halves of 3/8" tube to make a holder for his phone. Using his idea - and modifying it somewhat to use what supplies I had on-hand - I built one of my own: 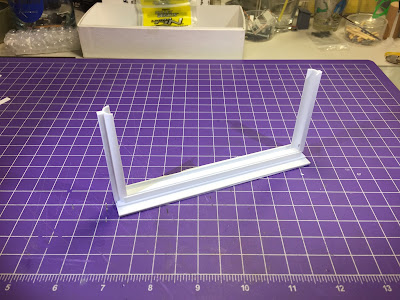 It was a really fun evening project that went together really quickly with raw styrene and Tenax. The most difficult part of the process was figuring out how best to hold/clamp pieces while I applied the solvent (oh, and trying to cut 3/8" tube in half - lengthwise - was no picnic). It's always enjoyable to spend time at the workbench - especially when you can produce something as quick as it is useful: 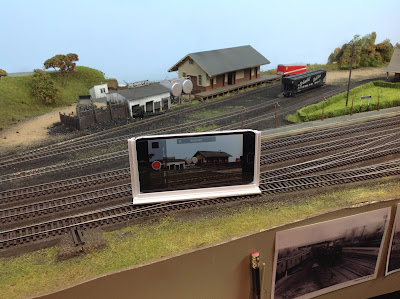 I'm really looking forward to using this holder whenever I use my phone for photos (as opposed to my larger/better camera) - bonus: the styrene doesn't short out the rails. In fact, this is the setup I used to take the videos I took over the weekend back in October, 1948.

*******
Hope you enjoyed this week's tips! If you did - and especially if you made a list or holder of your own - I hope you'll let me know in the comments!
Posted by Chris Adams at 9:00 AM