Throwback Thursday: The Circle of Life 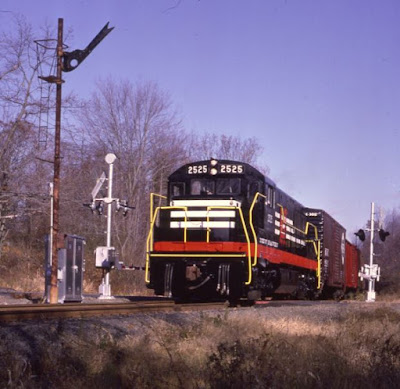 This shot was taken at Connolly Drive, Old Saybrook in November 1987.  By me. But - as they sometimes say - "there's a lot more to the story."

As luck would have it, the only house we could find that we could afford and that didn't need a lot of work was - you may have guessed - on Connolly Drive. We moved there in July 2007, about 150 yards west of the spot where I'd stood to take the photo freight photo almost exactly 20 years earlier.

I don't remember exactly what I was thinking as I clicked the shutter way back then - 18 years old, working on the railroad, my whole life in front of me and having no idea where I'd end up. But I couldn't possibly have imagined then the path my life would take - that I'd be living along the tracks in Old Saybrook with a wonderful wife, a good career, and the privilege of being blessed enough to live my childhood dream again in middle-age.
Posted by Chris Adams at 3:30 AM