It's no wonder model railroading is "The World's Greatest Hobby" - there are so many different aspects to it that, no matter what you might be in the mood to do, there's always something you can do on a model railroad.

But that wide variety of choice does make for some indecisive days from time to time. Yesterday was a good example . . . 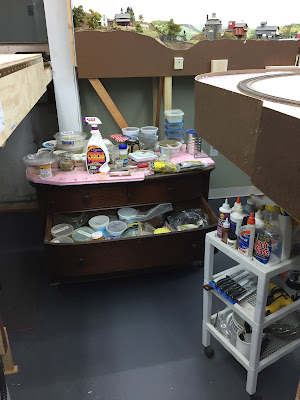 I started by getting the scenery carts out. I've been waffling about doing "real scenery" in the Wethersfield scene, but my lack of confidence in doing it "right" the first time keeps me from making further progress in this area. But I figured with a large block of time to just push through the mental barrier, I'd finally get something done scenery-wise. And to further bolster my confidence - not to mention my motivation - I decided to go back to my Airline branch modules for practice.

While they are among the most complete areas of the layout (since they actually have some scenery), they're still not finished: I need to finish ballasting, do some more ground cover, and install trees.  I figured since I really couldn't mess up any of that too bad, that success - and increased confidence - would be just about certain. So I did some ballasting . . . and then stopped when I realized I didn't have enough of the ground cover I needed to match what was already there.

One of the problems I'm discovering with my stash of scenery materials - as extensive as it is - is that it's made up of a lot of different textures/colors, but only tiny amounts of each. I also realized that, since adding the staging to the front of the Somerset module, it's really difficult to reach the back of that scene to do any scenery. I considered borrowing one of these, but I think I can manage with just a taller step stool. 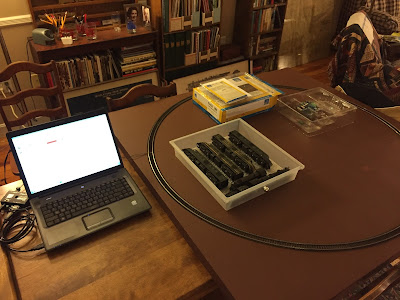 Bill did the ESU decoder installs on these and even modified the stock programming to put the independent brake on F7, to match my mogul. But since then, I've done some extensive function key mods myself to my other ESU decoders, and the sounds on these DLs needed to be modified as well. So up to the workbench they went, and I fired up the Lokprogrammer.

First, I changed the stock horn (a Leslie, IIRC) to the Wabco E2. Then, I maxed the Master Sound Volume and backed off all the other sounds except for the horn. Interestingly, if you reduce the Master Sound (CV63 IIRC), it reduces the horn proportionally - which is as expected, except the prime mover sound is always much louder, overpowering the horn (not cool). So this is the only work-around that I've discovered to make the horn (much) louder than the prime mover. Bonus: editing the sounds this way allows you to dial-in exactly how you want everything to sound relative to everything else. Then the Master Volume can be used as expected - to reduce/increase all the sounds by the same amount and in the correct proportion.

Finally, I changed all the function key assignments to match what I'm doing in my other ESU-equipped engines - primarily moving Drive Hold to F5 and and the brake to F6. That way, you can see on the NCE dogbone screen whether or not those functions are engaged.

Once I did all that to the first DL-109, I made a copy of the .esux file to download into the next unit in line - 0742. Strangely, when I did that, I could no longer get 0742 to run! And - scariest of all - when I put the engine on the NCE programming track, it couldn't read the decoder(!). Fortunately (and strangely), it did read the decoder version and I could then get it to run. So back up to the bench it went. And the same problem happened.

A reboot of the Lokprogrammer software seems to have solved the problem. But we'll see tonight when I try and finish the programming on 0742.

That is, unless I feel like doing scenery. Or finishing up my flatcar (not to mention the Rt 15 overpass). Or taking some more photos. Or....

Well, you get the idea. Depends on what I'm in the mood for. "World's Greatest Hobby" indeed!
Posted by Chris Adams at 8:28 AM