A Few Words about Wordless Wednesday #186 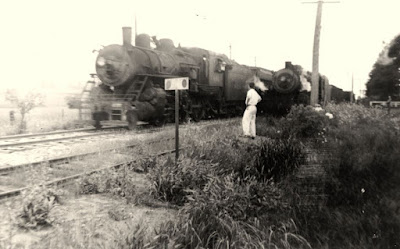 The above photo looks innocuous enough, but there's actually "More to the Story...."

During the Summer of 1945, the New Haven reballasted the Valley Line from Hartford south to Middletown. Well, "ballast" is a bit of an overstatement - no traprock here, mostly gravel - but still better than what was on the line further south (which was lucky to have cinders, hardpack dirt, or sand). And here we see the Valley Local southbound on the main, led by K-1d mogul #466 (the regular #356 being down for boiler wash or other maintenance), passing the work train on the siding, led by J-1 class mikado #3014 with a string of ballast cars. Location is just south of the Mill Street crossing in South Wethersfield.

I thought at first it was a John Wallace photo (same look, resulting from the Brownie camera, usual era, and he's the one who sent it to me), but it turns out one of the crew from the ballast train actually took the photo using John's camera. John's actually the kid in white, watching the local go by. Ted Michalicki is on the fireman's seat of the 466 and Dave Corsair was still in the Army (the War was still going on), but would be back on the local in the Fall.

Despite his white duds, John fired the 3014 for most of that day - not too difficult given the light duty of ballast spreading. Len Buckley was the engineer on the J-1 and even let John run the train back to Hartford (it had to back up the whole way since the south switch of the South Wethersfield siding had been taken out and the engine couldn't do a run-around).

Also of note is the New Haven's distinctive flanger sign - a horizontal white board with two dots. Remarkably, it was that sign that initially caught my eye in this photo. It wasn't until asking John about it that all this other great info came out.

And now - thanks to John's excellent memory (not to mention his photo, no matter who actually took it) - you know "the rest of the story."
Posted by Chris Adams at 5:46 PM