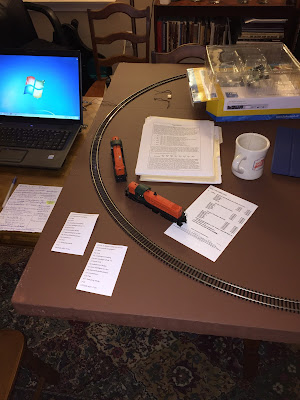 It took me a while, but after many operating sessions and some trial-and-error (not to mention the fact that I rarely have the opportunity to operate my own stuff...), my DERS-2b (New Haven Alco RS-2) is finally dialed-in and running the way I want it to - which is to say, like the real thing.

Now, I don't pretend to know everything there is to know about how a real diesel locomotive is supposed to sound & feel when operating, but I know a little bit more than the average guy since I started training to be a diesel engineer. I know, for example, that even a loco running by itself (aka a "light locomotive") doesn't get-up-and-go like your car as soon as you move the throttle. The traction motors have to spool up and the engine starts off slowly. This effect is even more pronounced when it's pulling cars.

So one of the settings I always change on my decoders is the acceleration setting (CV 3) - and, yeah, it's admittedly a little on the high side. Newbies have to get used to the feel of the throttle and learn how to run the locomotive safely - just like on the real thing.

And the same rationale goes the "other" way - which is to say, when the throttle is turned off a real locomotive doesn't immediately stop. It'll coast a while. Sometimes a LONG while - until you apply the brake. So I also set the deceleration setting (CV 4) pretty high.

I first experienced the "brake" function on a model locomotive when a buddy installed a Tsunami in my K-1b steamer. That thing coasts on and on, rods clanking, until you apply the brake. Another friend moved the brake function from F11 to the easier-to-use F7 button. That K is still one of my favorite engines.

But the DERS-2b, with an ESU/Loksound decoder installed really takes the cake. The Full Throttle/Drive Hold feature allows me to replicate all the sounds and most of the feel of operating the real thing. The brake feature was a little tricky to get just right (and you can use the Drive Hold feature similarly), and I've moved it to F6 (which is the last key shown on my throttle's display), but that engine has all the bells and whistles (excuse the pun) that I enjoy about diesels. Steam is still my favorite, but this Alco comes in a very close second - an "honorary steam engine" even without actual smoke.

The DERS-1b (Alco RS-1) was a bit more of a challenge for some reason. I just couldn't get it dialed-in the same for the longest time. Then the obvious finally occurred to me - just copy the CVs. Both engines have Loksound decoders with Full Throttle - just different sound profiles (Alco 539T vs. 244 prime mover). Consequently, I used my LokProgrammer to copy my RS-2 settings to a file and then loaded that file to the RS-1. Voila!! Now they both run the same, which is to say - Fantastic!

So that's "The Rest of the Story" and the explanation for what I was doing last night. This week's Wordless Wednesday is a quick grab shot of my DCC/decoder/workbench setup: LokProgrammer & Test Track, along with "loco cards" listing all the functions for each engine. Click on the links to read more about each (including how - or more interestingly "why" - I built the test track the way I did).
Posted by Chris Adams at 6:22 PM