Monday Musing: When "Right" is "Wrong - Scale vs. Compression

When you start out building your first real model railroad (as opposed to just having the track go 'round the Christmas tree), one of the first things you confront is the inherent tension between your chosen scale and your available space. You may envision a transcontinental transportation system, but if you want to be true to scale, there's no way you're going to be able to fit that in your basement, much less your spare bedroom. Even in N scale, that three mile shortline you resigned yourself to will still take 90 linear feet(!) to do to scale.

So, we select certain areas to compress. This "selective compression" typically eliminates the "boring" bits between towns. Sure, we don't have as much "mainline run" between towns as the prototype did, but that's a compromise most of us can accept in exchange for having a railroad that "goes somewhere." Even my pike, as satisfying as it is operationally, compresses about 50 miles of mainline into approximately 120 linear feet - barely 2 miles in HO scale.

So much for the mainline. What about structures? Surely, we don't have to compromise there - we can always build them to full scale, can't we? Well, that depends on what you're building. Most of us are glad the days are behind us of model factories being only about as large as one boxcar. But the larger the prototype structure, the more likely it will "have to" be compressed.

"Have to" isn't always bad though - many times, you may actually want to compress a structure in order to have it fit the scene, especially if building it to full scale actually "looks" too big. 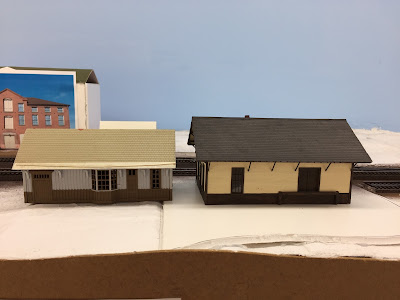 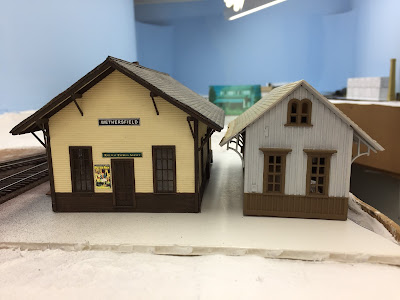 Which one is "correct"? They're both HO scale - in so far as the windows and doors are HO scale. And that's a critical fact: you have to be sure your people actually fit. But what about the overall proportions?

It all really boils down to the Art of model railroading as opposed to the science. Science demands perfect prototype fidelity in as many respects as possible. Sure, you might not have every bit of detail on your model as on the prototype (you might not even see some of those details in HO scale anyway), but you certainly want the dimensions to match.

Unless doing so compromises the over-all effect. That's where art and intuition enter the picture.

The next - and largest - structure in Wethersfield to be built is the Gra-Rock bottling plant. 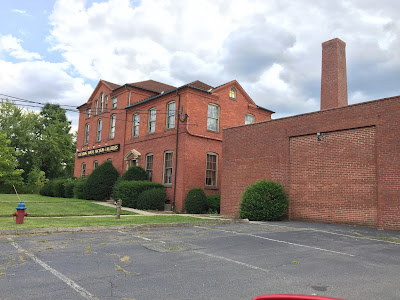 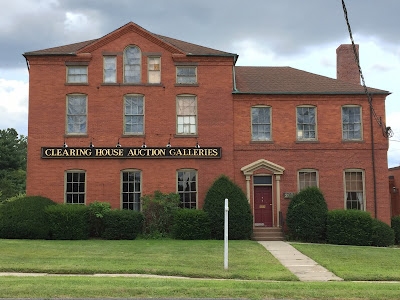 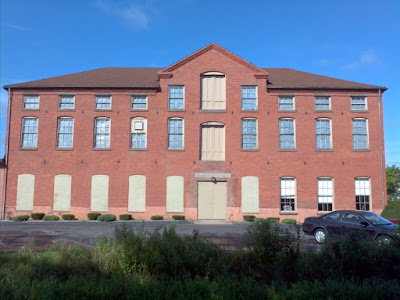 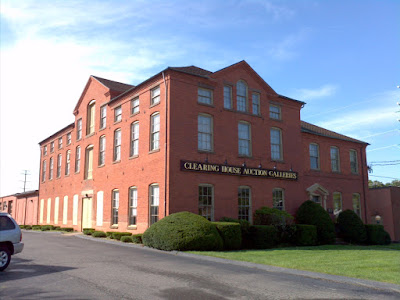 I've been debating whether to compress this building and, if so, to what extent. It's not a comfortable place for a left-brain thinker to be. I want it to be "right" and - to my mind - "right" can only mean "built to full scale size."

But a full scale size mockup I tried overwhelms the Wethersfield scene. It's not as if I have the full 3 miles for this scene (180 feet) where a full-scale Gra-Rock would look right in context - I only have a bit less than 10% of that. Now, I'm certainly not going to compress Gra-Rock by 90% - but a full-scale version would look very out-of-place considering all its surroundings are already compressed. In other words, "right" would actually be "wrong" in this case.

I've heard of some folks at the far left-brain/science end of the spectrum - building everything to perfect scale. Their efforts are very impressive - but they typically have only enough room for a track or two and don't usually have the amount of operation I enjoy. And there are others that get a lot of joy and satisfaction from cramming as much as possible into their available space, with barely a nod to plausibility. Of course, most of us are somewhere in the middle - and the precise point on the spectrum probably has a lot to do with what "looks right" to your eye, given your space, even if it's technically "wrong."

So where do you fall on the line?
Posted by Chris Adams at 12:44 PM

Email ThisBlogThis!Share to TwitterShare to FacebookShare to Pinterest
Labels: Lessons