I've been enjoying riding a wave of motivation lately - one of those all-too-rare times when everywhere I look I see projects I can do Right Now, instead of being overwhelmed with too much to do and no oomph to do anything anyway. And when those waves come, you'd better catch them or risk getting swamped - distracted by something else.

I've been focusing on the Goff Brook/Wethersfield/East Berlin area of the layout and finally making some visual progress. Thankfully, Bill has been able to come over a few times lately and his work in the Goff Brook is really bearing fruit, as you can see:


In between Bill's visits, I finally got the rest of the track painted in the area. Click here for all the prep work leading up to spraying - and here's how it looked as the fan was sucking out all the fumes:

Once the base coat (Krylon Camouflage Brown) was dry, it was time to try weathering the track - which at this point means weathering the ties. I'd planned on trying Mike Confalone's method using Polly Scale colors (concrete, mud, dirt), mixing them 70:30 with water to form a wash, and applied randomly to the ties. But I found that method to be a little too unpredictable for my (OCD/left-brained) sensitivities, and I didn't want to have to wait until everything dried to see what I'd end up with.

So after Bill showed me how he does it using a dry brush technique, I decided to try that. And it worked out great.


The technique is really simple - just choose a few different shades of gray and brown, dip your brush in and wipe it (almost) all off on a paper towel, then apply - randomly (tough for an OCD-er) - to the ties, varying color as well as coverage. Sidings should have just about every tie weathered and be lighter in color, while the main should be darker with some new ties here and there.

I admit, this process does take some time (and it remains to be seen how noticeable it'll be once the track is ballasted and the scenery is in), but after the initial 10-15 minutes' acclimation it goes fast. I did all the track from Goff Brook through Wethersfield to East Berlin (+/- 35' of track, including sidings) in about 3 hours, start to finish. But the time was actually enjoyable (helped with some podcasts) and surprisingly therapeutic.

Unfortunately, it was only after I did all this nice tie weathering that I started to reconsider the Stanley Chemical siding in East Berlin.

Figuring this siding would be buried in the dirt, my original plan had been to have it make its way down from the main (on full-size (1/4"?) HO cork roadbed) to plywood level. 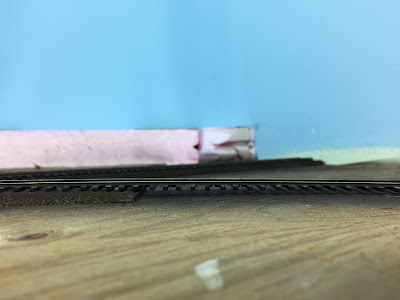 While I figured I could fill the resulting gap easily enough, I was worried that the track would actually be too low once I added ground goop and scenery.

So, figuring it would be much easier to build terrain up to cover the track rather than have to live with pancake flat plywood, I decided to add some N-scale roadbed underneath this siding as I had the others.


Of course, it would have been best had I figured all this out sooner - but this is yet another in a long line of examples of how easy it is to re-do and/or have a do-over. And that dawning realization is really helping me with my usual Analysis Paralysis. As the Nike commercial says - Just Do It. And as any experienced model railroader will add, And don't be afraid to do it over. There's no such thing as a mistake - just a learning opportunity, right?

If we can just remember that - and really take it to heart - I think the waves of motivation will continue to come in and give us a great ride.
Posted by Chris Adams at 6:45 PM