Yikes! Between the holidays and spending any leftover time on the Christmas diorama, I haven't had any time to post my progress. So it's been over two weeks since I posted the latest progress pics that showed the initial "snow gooping."

Since there are so many steps that require dry time (gooping, taping/topping, painting), I decided to leverage early-morning-time-before-work to keep progress going. So the next morning, I did the initial taping/topping on the masonite I'd be using for the backdrop:

While that dried, I decided to tackle the fascia. One of the benefits of using layered foam for scenery is that you can easily determine the contours of the land. So all you need to do next is temporarily clamp your fasica board to the layout: 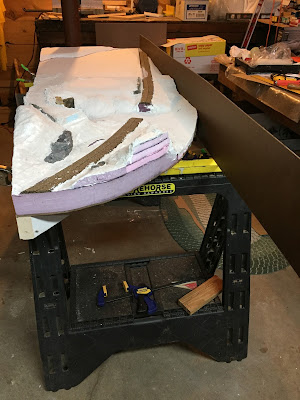 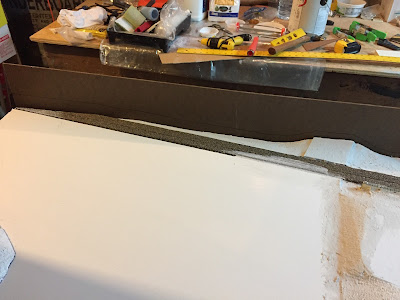 And cut on that line with your saber saw. Voila! 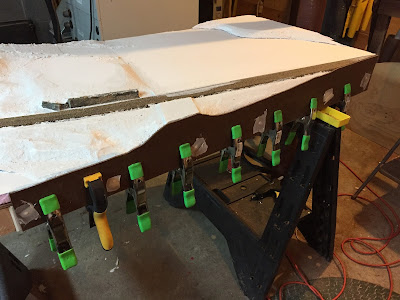 Since I used 1x3s for the benchwork, there was almost as much foam as wood to attach the fasica to - so I used some foam-friendly adhesive (Loktite PL300) to glue the fascia and used screws in the wood. In the photo above, you can see I clamped it while it dried and spackled over the screw heads (which I'd countersunk).

Next, I decided to add some relief to the town area, defining roads and sidewalks. Foamcore is super handy for this. As you can see above, I used some scrap foamcore to provide a base for the town buildings and to provide a sidewalk/curb that would also define the roadway. This was all hot-glued in place after cutting to fit.

With the final rough contours of the town finished and roads/sidewalks defined, it was time to turn my attention to the trestle scene. 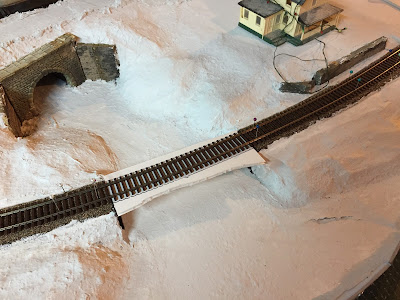 I didn't know quite how to go about building the trestle, but I knew where the track had to go, so I mocked all that up and used more foamcore to trace the track that would rest on the trestle and create a template for construction. I've never built a trestle before, so it'll be interesting to see how this turns out. Stay tuned!
Posted by Chris Adams at 8:30 AM