In the homestretch on the Christmas Layout Project - which is good, since Christmas is just around the corner...

Now that I have track in and the structure locations finalized, it's time to do the photo backdrop. I'd considered just leaving the sky blue painted masonite alone since that's basically what I'd had on the earlier version of the layout. But this project is as much about practicing my skills - and developing new ones if possible - as it is about getting it done, so I figured I'd try a photo backdrop. I've done one of these before (on the "Airline" modules), but I've never attempted one this large. 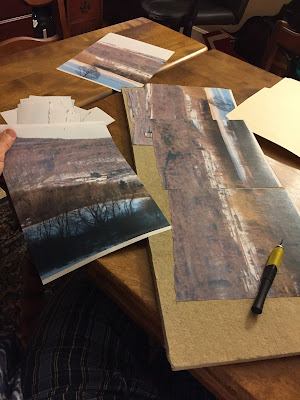 I chose some winter images that were on a CD that PeteL gave me and just printed them out on regular paper. Then it was just a matter of trimming the white border off the sides (a heavy duty paper guillotine is most handy for this step) and using an XActo to remove the sky. See photo above.

Using glue stick, I applied the sheets of paper one sheet at a time, being careful to match the edges - like tiny pieces of wallpaper. While butting the edges up against each other looked great at first, I fear that even the slightest bit of shrinkage will result in unsightly gaps. The solution is would have been to either overlap the images slightly (which would have required coloring of the edge of the paper on top) or painting the masonite at where the joints would fall in a color that would be at least close to the photo color (too much planning ahead). Of course, I might have been able to stitch the images together and print it out in one looooong sheet/roll, but that would have been pretty unwieldy, and not inexpensive. 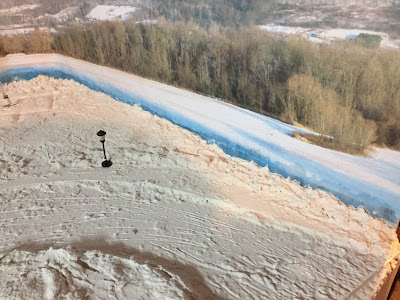 Another thing to note is that if you need to fill in any gaps between the layout and the photo backdrop - especially if you're using any sort of "goop" that's wet - the photos are going to wick up some moisture. See photo above. It didn't look this bad after everything dried and it's only noticeable if you're looking for it. 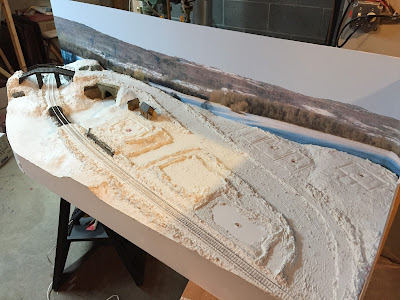 This overview shows - at least to my eye - that a photo backdrop is certainly worth the extra effort. Even though I didn't make much effort to match the foreground 3D scenery ("snow goop") to the backdrop color, it still looks great. 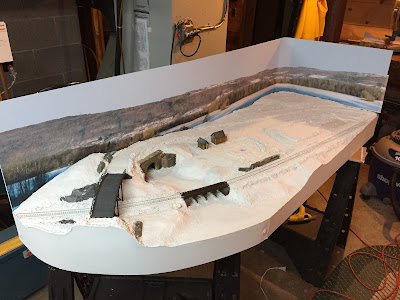 So, I wanted folding legs, but didn't want to go to the time/expense of finding/installing them. And even if I did, I didn't want to be limited to the typical height they would give me. Then I remembered seeing "homemade" sawhorses and realized I could make up a couple of those pretty easily - and have them be whatever height I wanted.

To make them, you need sawhorse brackets (2 pair) and enough 2x4 material for the height you want. I wanted 4' legs, so in my case I needed 5 2x4s - four of them cut in half for the 8 legs (2 sawhorses at 4 legs each), and one cut up for the cross pieces. Beware - I assumed that "standard" 2x4 studs were 2x4x8 foot long. For some reason, the ones I got were less than 8' - and created some problem later (I had to fill in with some other stock I had on-hand). 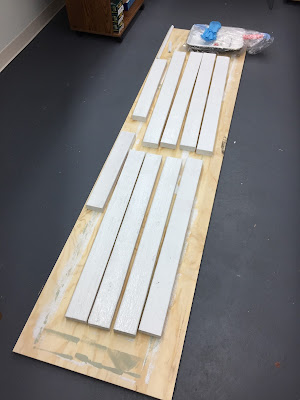 I cut them up to the lengths that I needed then painted all sides with white ceiling paint I had on-hand. 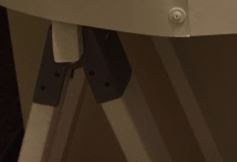 Unfortunately, I didn't get a great shot of the finished product, but the pic above gives you an idea of what I did.

One of the most time-consuming (and a bit challenging) parts of this project is the lighting. But you can't NOT have lighting on a Christmas display! So, of course the buildings would have to be lit, I'd have a Christmas tree - lit up of course - and wanted lights around a skating pond and Christmas tree store. All that takes some extra effort, but I found a good tip that makes installing them a bit easier.

For each of the lighting locations, I'd need to run wires down through the snow goop, 2" of foam, and masonite. The easy part was drilling the hole (provided you have a long enough drill bit) - threading the wire was a bit more difficult (try pushing a wire through a 1/8" hole for 3 inches...) 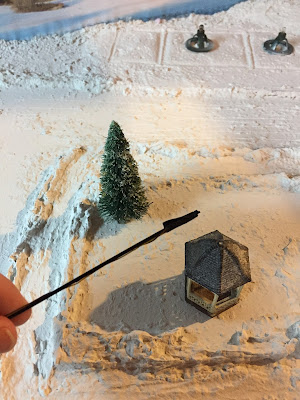 The solution was to use a length of coat hanger and tape the end of the wire to it, and then push down through the hole. 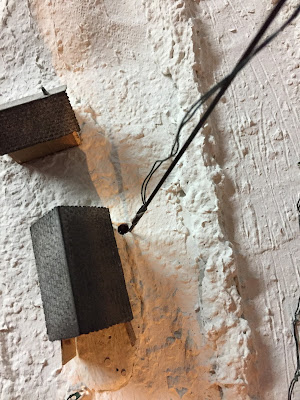 I ran all the wires to underneath the layout and connected them through an old Atlas connector to the "accessory" (AC) terminals an old Life-Like power pack. From there, the process isn't complicated - all the repetition just takes a while. 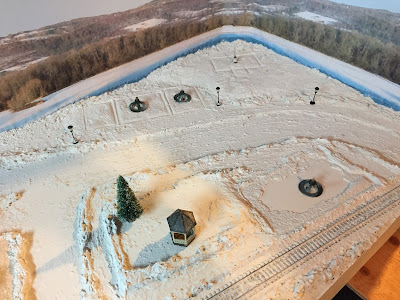 In the  pic above you see the structure lights for the town buildings, church, and station as well as the three street lights. Next step . . .

As part of the lighting installation, I also put up "poles" (made from stained wood RR ties) to support the lights around the skating pond and Christmas tree salesman.

And while I was making holes for poles, I figured it'd be a good time to start installing trees. In most places, I was able to just use an awl but there were a few places - especially where the snow goop was really thick - where it was just easier to drill a hole. This process is slow but sure - make a hole, add a little hot glue to the bottom/stem of the tree, insert tree in hole. The longest part of this process is deciding where to put the trees and what sizes to use. Variety is key - and odd-numbered groups look best. 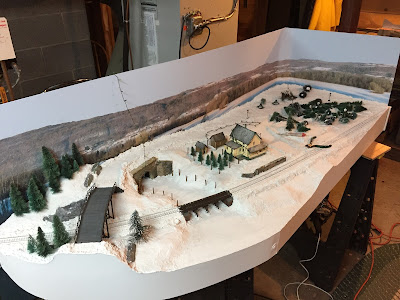 With the backdrop, legs, lights and trees (almost) done, I can just about see the end of this project coming into view in the near distance... All I have to do now is finish "planting" trees, string the lights around the pond and Christmas tree shop, and set the structures in place. Then it's the fun of adding the cars and all the people, creating the little mini-scenes that will really bring things to life!
Posted by Chris Adams at 12:30 AM