Now that the trestle is done, it's finally time to install some track. Since I'm only dealing with a single track, the most complicated part of this process was marking where to cut the 3' flex to accommodate the bridge track section. What made it complicated at all is that the track is on a looooong curve and I wanted to be sure not to introduce any kinks. So after cutting/splicing flex and bridge track, I soldered the joints so that everything would flow smoothly, with no kinks. 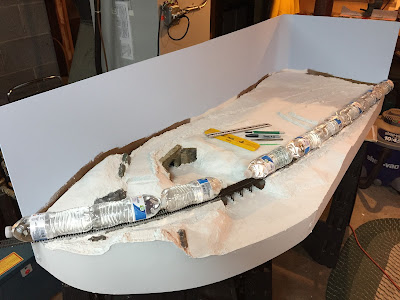 After that, it was just a matter of spreading Aleen's tacky glue on the cork roadbed (having rasped it to make sure that everything was smooth and there was no "snow" that would affect the track), and then weighing it down with water bottles.

While I waited for the track to set, I decided to place the structures. The challenge here would be to have the structures look "set in place" in the snow, but still be removable. The solution was Saran Wrap. 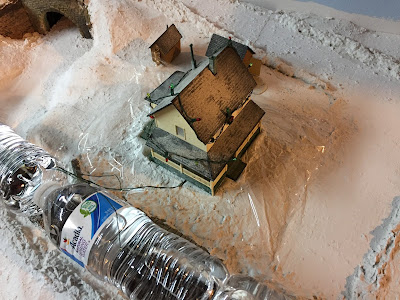 I spread a thick coating of "snow goop" following the footprint of the structure, then covered the goop with plastic wrap. Then I pressed the structure into the plastic-covered-goop. 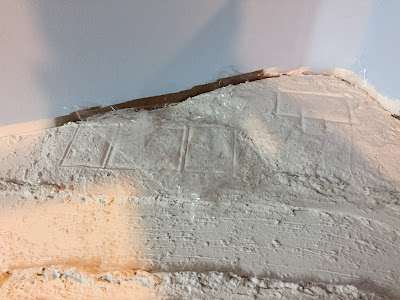 Once you pull up the plastic (carefully), you have a nice outline of where the structures go and - bonus! - when you place them, they look like they're sunk right into the snow. 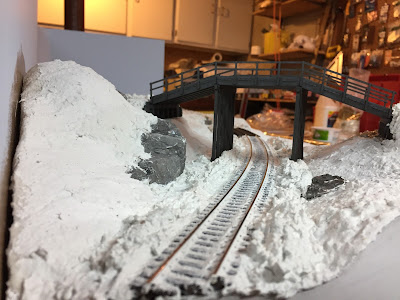 Once I was sure the track wasn't going to go anywhere, I removed the bottles/weights and spread more "snow goop" over the track itself. I was careful to use my fingers to get the goop down to tie-level and made sure the flangeways were clear (just in case I ever want to run anything on this track). And - even more important - I wiped off the railheads before anything dried. This stuff is almost like concrete when it cures. 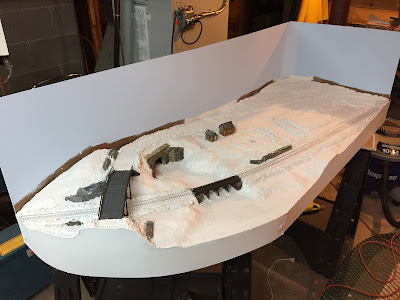 So that's where we are at this point. With the track and bridges - and even a couple of buildings - in place, it's really starting to look like something!
Posted by Chris Adams at 12:30 AM