What could be more fun to work on during the Thanksgiving Holiday than a Christmas scene, complete with railroad station, church, Christmas tree salesman and a little town, complete with gazebo and town Christmas tree? For a taste of what I mean, check out my last post. That was the former layout that had to be scrapped. But I'm salvaging all that stuff for this new module.

I started with rudimentary benchwork - just a simple open-grid, with a masonite top, covered with 2" foam - and then got out the buildings from the old layout to see how everything would fit. I even built an overpass to carry the main road over the tracks. That's where I left off last weekend.

With some available time around Thanksgiving, I decided to continue progress using foam for scenic forms. My first experience with using foam this way was last Christmas - and it didn't go well, not at first. But being a little older and wiser, I gave it another go and things moved so fast that I was already well along before I took the next progress photo, showing an overview with the bridge temporarily in place and the town roughly laid out... 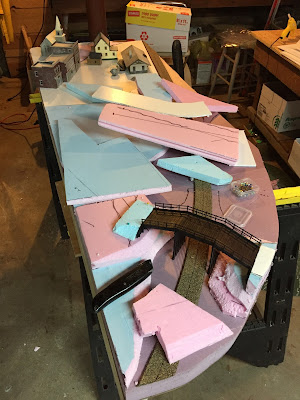 Since pictures are worth a thousand words - and you'd probably rather see photos than read a lot of text - I'll let them bear the burden of showing my progress over the last few days. I'll chime in in the captions as needed.


Even with the "less canyon-y" look, the pond on the far side of the tracks still looked a little contrived for my taste. But, like the Grinch, I got a wonderful. awful idea.... I found an old tunnel portal in my scrap box and decided it'd make a fine underpass/culvert for a creek to feed the pond....

After looking over the scene, I still wasn't happy with the shoreline. It was just too vertical and didn't look very realistic to my eye. The solution was to "soften" the shore a bit, even if that would make the pond area narrower. No worries though - since the "pond area" is now a creek, the narrower waterway looks fine. Here's how I did it:


Once the plaster cloth was draped all over the forms, smoothing out all the rough edges, I mixed up a batch of "snow goop" - which is basically ground goop, but without the brown paint. Unlike my first Christmas layout where I used Sculptamold, I decided this time to try Celluclay as the base, Mix that with white glue, white latex paint, and enough water for a peanut-butter-like consistency. Spread like you're icing a cake. 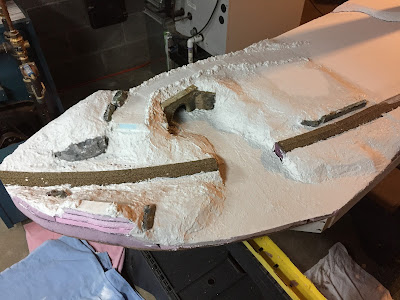 And here's where things stand as of this evening. The plaster cloth had "violated" the water surface a bit, so I spread a thin layer of my goop over it to smooth things out. I "drifted" goop along the road to look like it had been plowed (and had the added bonus of clearly marking the road's boundaries), and used some goop around the rock, wall, and portal castings to put them "into" the scenery.

So far so good - but I'm leery of how the Celluclay is going to work out. It seems to be MUCH more lumpy than the Sculptamold, so the surface isn't nearly as smooth as it probably should be. I tried to take a wet brush to it to smooth it out, but the lumps didn't take kindly to that. I'll see what it looks like when it dries, but I may have to do some sanding....

But all in all, I've made a LOT of progress over the past week so am on-target to having this done - if not in time for the next Photo Library get together - at least in time for Christmas!
Posted by Chris Adams at 6:14 PM