Thanks for all the encouragement re my last post - it's nice to be reminded that we all go through those stages occasionally and that the usual remedy is just some easy time away from the hobby. But now there's a cold snap in the forecast and with that comes a reminder that Modeling Season is approaching. Maybe I just need to plan to take the summers off as some do to great effect. Something to think about ...

But in the meantime, in addition to the occasional sabbatical, last night reminded me that a good ol' Work Night with friends can be a very effective antidote as well. 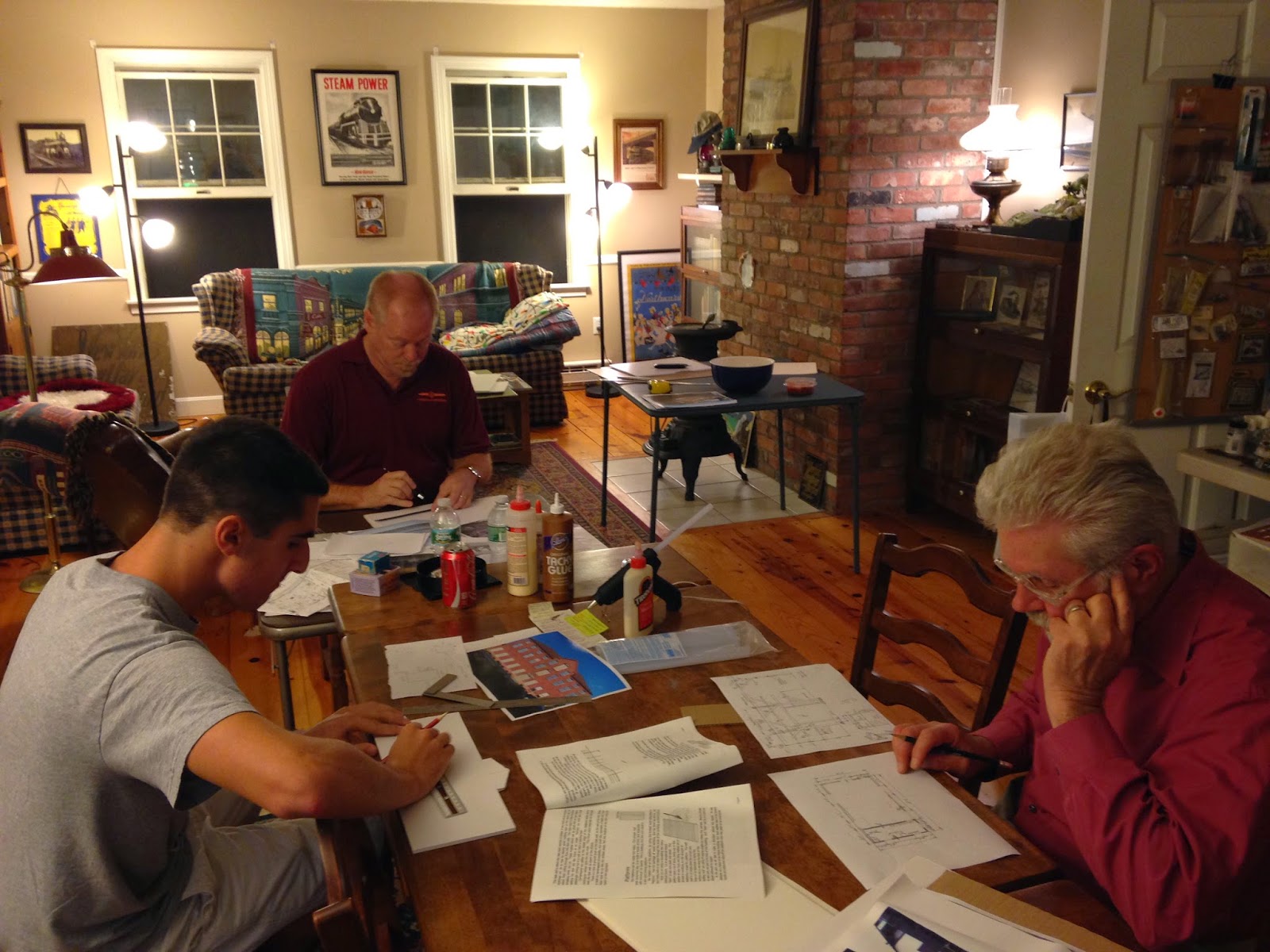 Bill, Dick and Roman came over to help do some structure mockups. It occurred to me after the last operating session - and even more so as I lower the backdrop & rework some of the scenery base - that the next big priority really needs to be structures. Only when I have the structures in place - at least the main ones that affect operations - will I be able to finalize siding locations and, as important, see how the structures might impede operations, reach-in, uncoupling, etc. And since I really hope to have another operating session soon (it's been close to 3 months since the last one and I model October, 1947 - so I should at least operate in October!), "structures" moved quickly to the top of the to-do list.

Given my recent peek into the abyss, I didn't want to fall back into my rut, so I decided quick mockups would fit the bill nicely - and unlike the usual "quick & dirty" structure (no, Middletown tower is still not quite done) - might actually get done over the course of an evening. Especially if I lured some friends over to help with the promise of making some actual progress.

I've never really done structure mockups before, not in any formal way, so I thought by documenting how I went about it you might be encouraged to try. And if you have any tips/tricks/guidance to share - what's worked for you - please let me know in the comments.

Since I'm a mockup newbie, I collected more materials and tools than I ended up needing. Here's what survived to the end of the evening & what folks liked best: 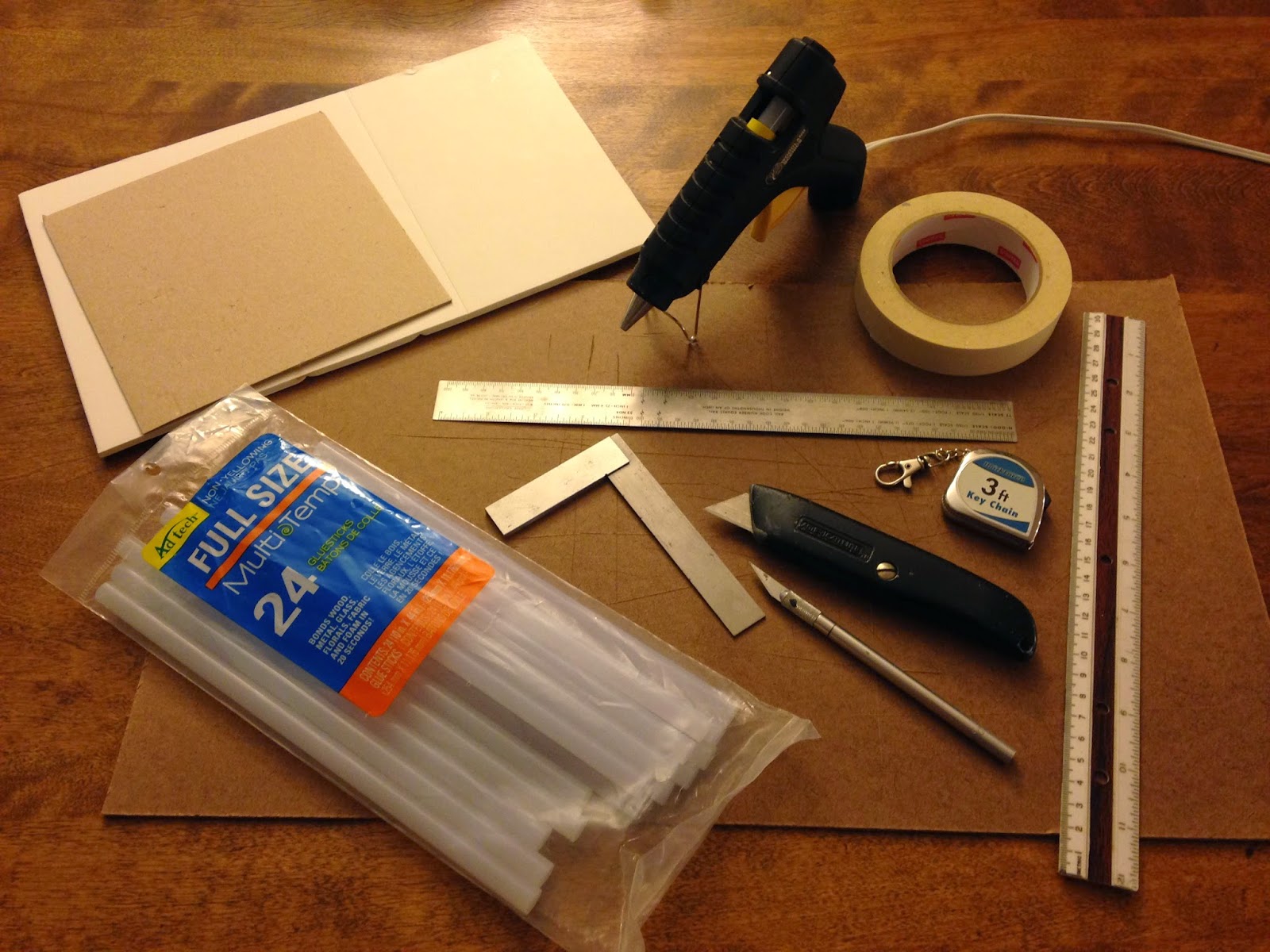 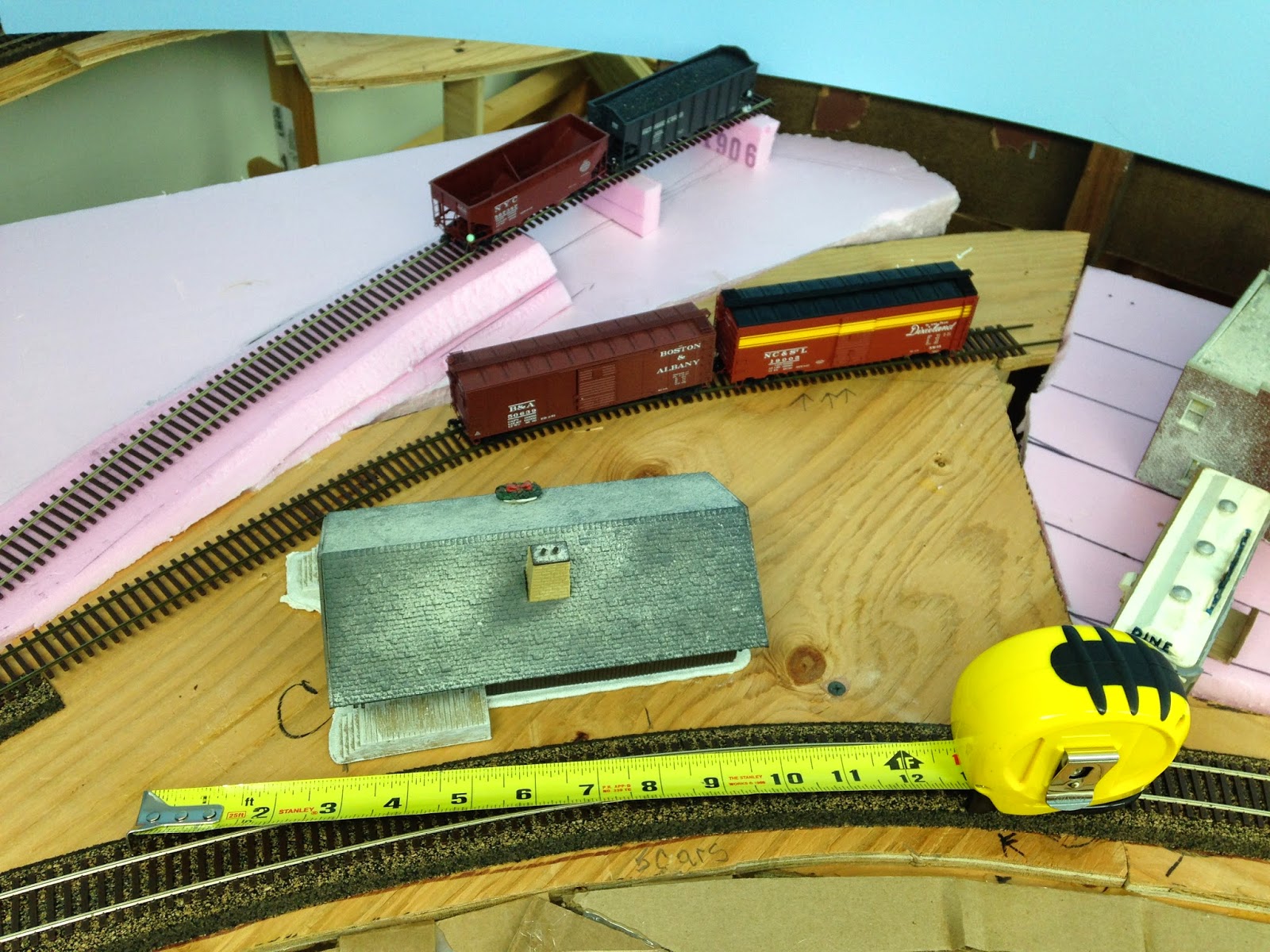 The first step was to go to the basement and measure out the total area within which the building had to fit. This is different than the building footprint. Here, I'm measuring the area for the station at Cromwell (the structure there is a stand-in from off of my Christmas layout).

I used Sanborn maps of the towns to help me figure out the footprints of the structures. There's a scale on the map and figuring out the footprint of the model is a matter of figuring out the prototype dimension in feet, dividing by 87.1 (for HO scale) and multiplying to get the number of actual inches. Getting that critical 3rd dimension - height - is a bit more difficult. For that, I used photographs of the prototype to help me estimate.

One of the nicest things about doing mockups is that they are the antithesis of the contest-quality model. No Analysis Paralysis here - just the pure enjoyment of building something. Here, "close enough" really is good enough. Make your best guess, sketch it on the material, cut it out and glue it together. Pretty soon, you have a building - and, believe me, even a rough little mockup gives you a huge shot of motivation to continue.

Another alternative to the process above is to, well, "cheat" a little by taking measurements off of an existing model and duplicate that. When I looked at photos of the Cromwell station (actually, the freight house - the passenger station was long gone by 1947), I realized it was very close to the Wethersfield station. And I already had one of those . . . 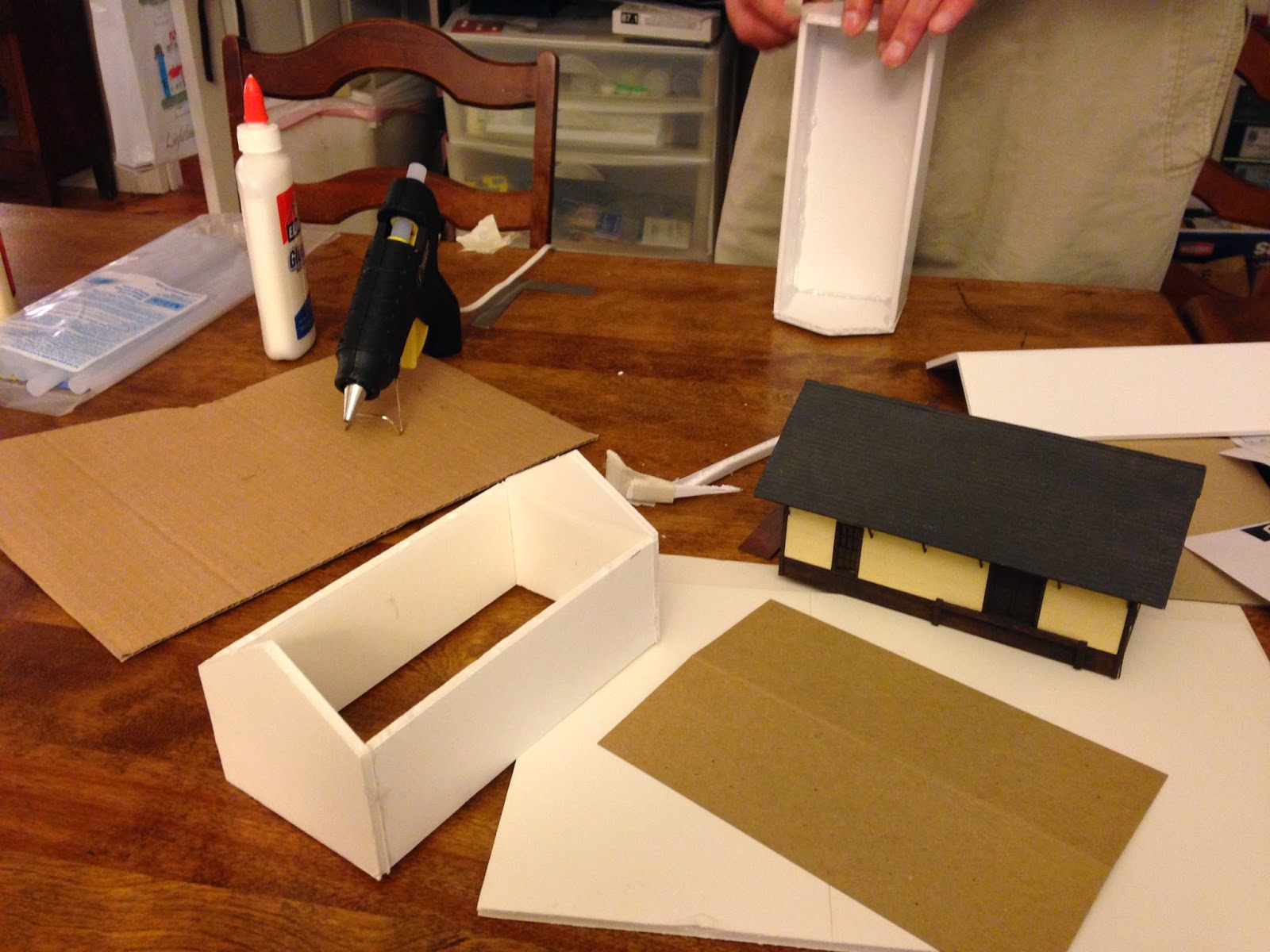 Here's my effort - four walls of foamcore - and the building I'm duplicating. And here's the finished product. Yup - that's "finished" for mockup purposes. No superdetailing here, though I have seen folks use photographs to wrap the walls and provide some detail. And I've also seen some of those buildings become permanent - way more than just a mockup.

But my whole reason for doing the mockups in the first place was to give my operators a much better sense of the obstacles they'll eventually have to work around, literally. And now is the time to discover whether having a building in a particular location - even though prototypical - is just a Really Bad Idea. I'd hate to put in a lot of time modeling a building if it's going to make operations impossible.

And there's another critical lesson that can be learned from this process: you realize just how LARGE even HO scale structures can be. Suffice it to say that the freighthouse in Middletown is much MUCH larger than the space I allowed for it. Ooops. That's where selective compression comes in. And to do that effectively, I twisted Bill's arm agreed to let Bill use his talents to give it a go. Stay tuned - if we're able to have anything in that space even resembling the prototype building it'll be a minor miracle.

Ah, the joys of prototype modeling! 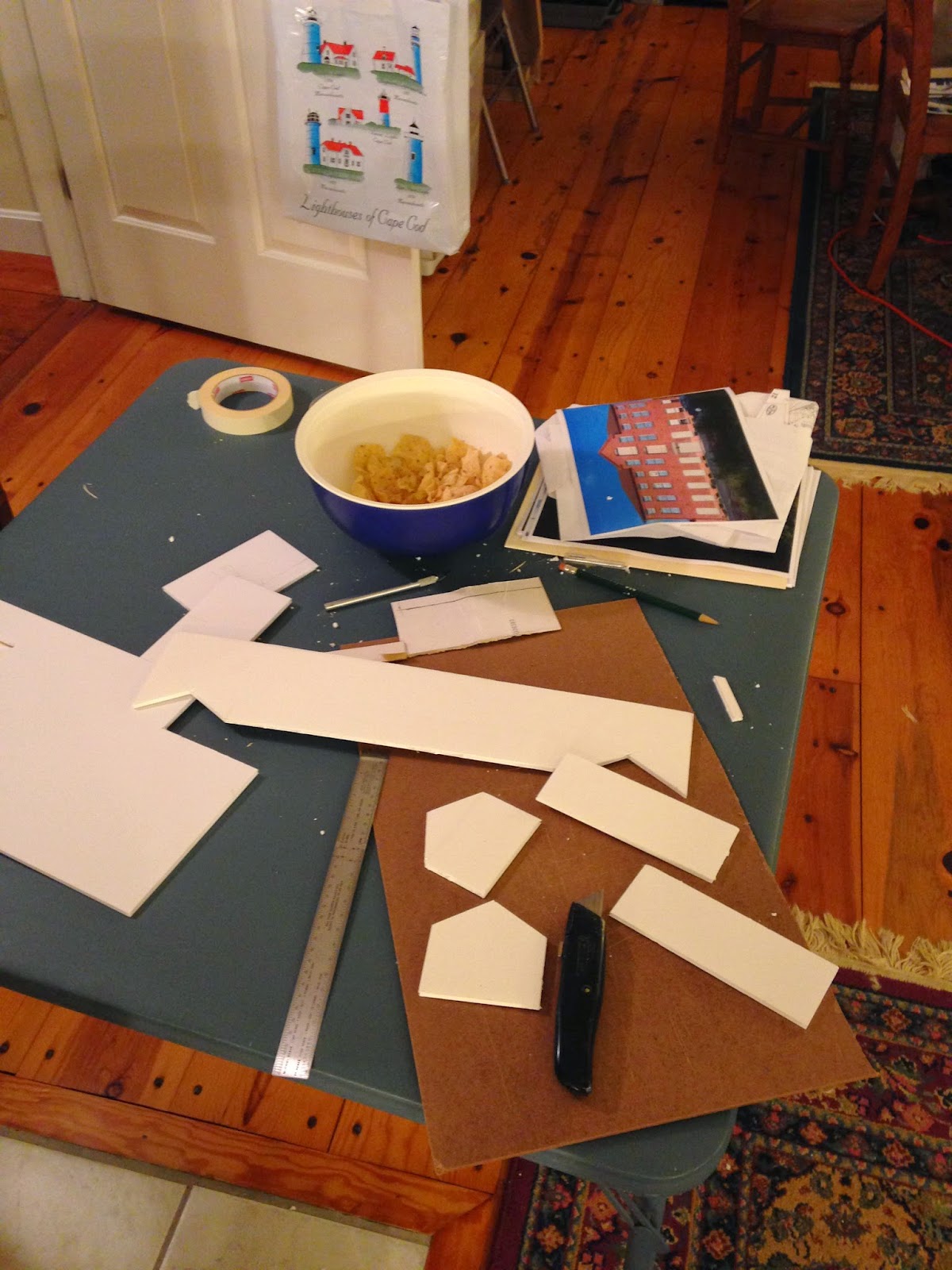 Two last things about a structure mockup work session: 1) you're going to make a mess - the foam in the foamcore has a way of getting everywhere; and 2) be sure to provide plenty of snacks. Maybe they'll encourage your buddies to come back for more building (and more snacks).
Posted by Chris Adams at 7:54 PM