I can't emphasize enough how important it is to have friends in the hobby to help you get over your modeling doldrums. Bonus if one of those friend just happens to be a professional modelmaker.

The main point of the next ops session is to see how operators work around the buildings that I plan to have on the layout. Knowing how large those buildings are and where they need to go is critical in determining final structure placement and siding location. Mockups really are the way to go for this step - they're very quick, low/no cost, and easily replaceable. Click here for more about my process.

Usually - at least when I do them - mockups are no more than a 3D box. If I put on a peaked roof, that's gettin' fancy. During the recent worknight, Bill decided to tackle the freight house in Middletown. Good thing. Turns out the prototype is MUCH MUCH larger than I imagined and would need to be severely compressed. Bill's just the right guy for that sort of thing, having lots of experience modeling a prototype and having just the right 6th sense for conveying the impression of a prototype building without having to model it full size.

We start with a photo of the prototype.  This one's looking northwest: 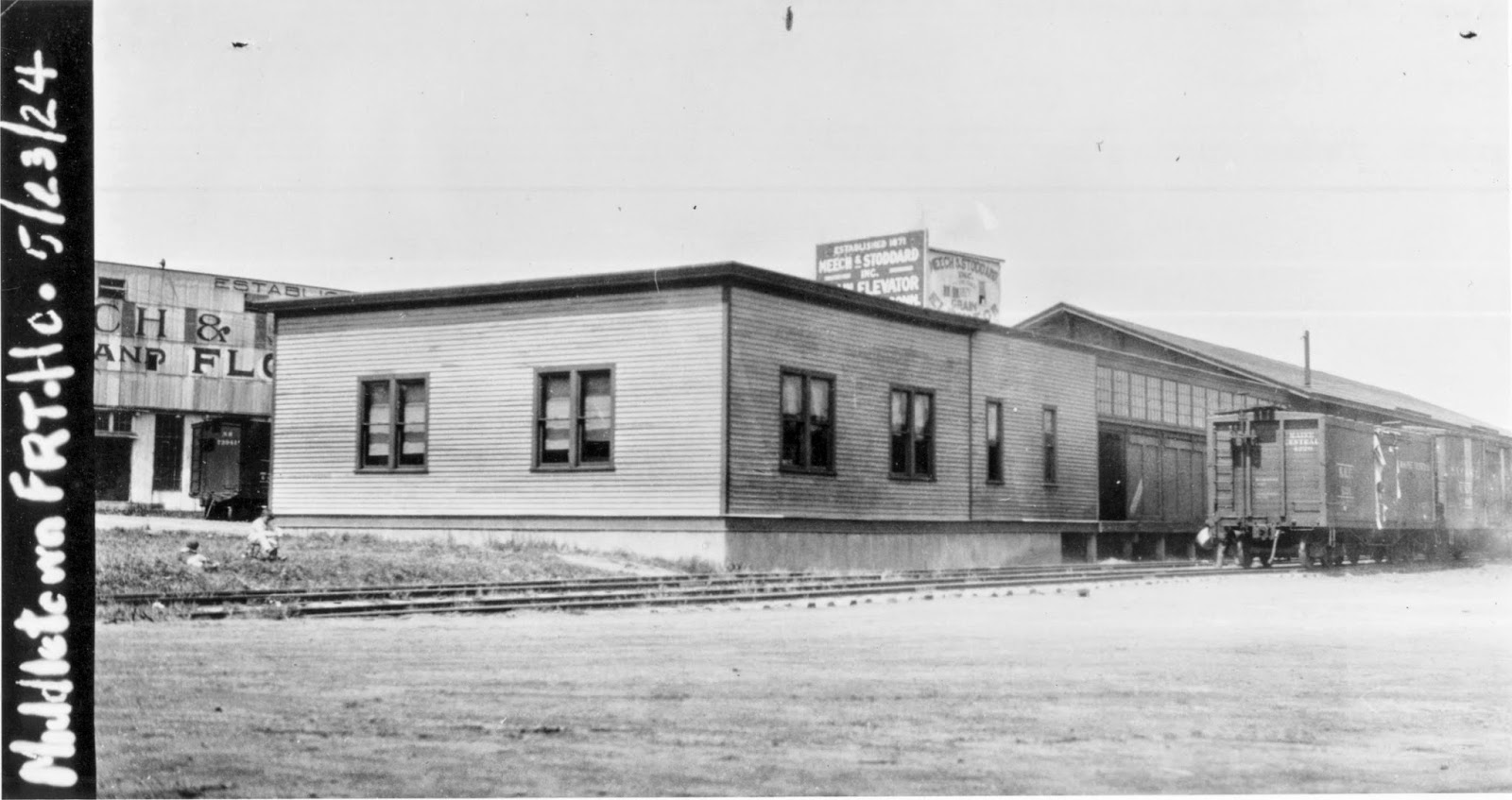 Note that there is a flat-roofed wood office addition at the south end, a funky section, then a large peaked roof brick section. That brick section is the actual freighthouse and has an interesting history...

<begin quick sidebar>
Neither the Valley Line nor the Air Line were the first railroads to reach Middletown. The city had been bypassed by the Hartford & New Haven RR - one of the first railroads built in Connecticut. The town fathers raised such a fuss that the H&NH finally agreed to build a branchline from its main line in Berlin down to the shore of the CT River in Middletown, c. 1850. It was actually a fairly profitable branch - Middletown was full of mills that needed to ship product, and there were docks on the river for interchange with steamboats. One of the facilities the H&NH built in town - and which was still around in 1947 - was the freighthouse. Here's a better picture:

<end sidebar>
As you can see, it's a huge building - even without the later additions to the south end. Fortunately, this is the non-trackside view and would be facing the wall. But we'd still need somehow to include it for the building to look at all like the prototype.

I only had a small triangular space in which to put this building - about 22" long total and tapering from 9" deep down to about 2".

Unfortunately, the prototype scaled out to almost 4 times that size!! So Bill took the measurements and photos home, said he'd "tinker with it a bit" and see what he could come up with.

A couple days later, I got a pdf which looked like this when I printed it out:
Not content with just a "box" of a mockup, Bill had basically produced a laser-printed kit! Way Beyond Fancy. All I had to do was laminate the printouts to some matboard, cut out the pieces, and hot glue them together. 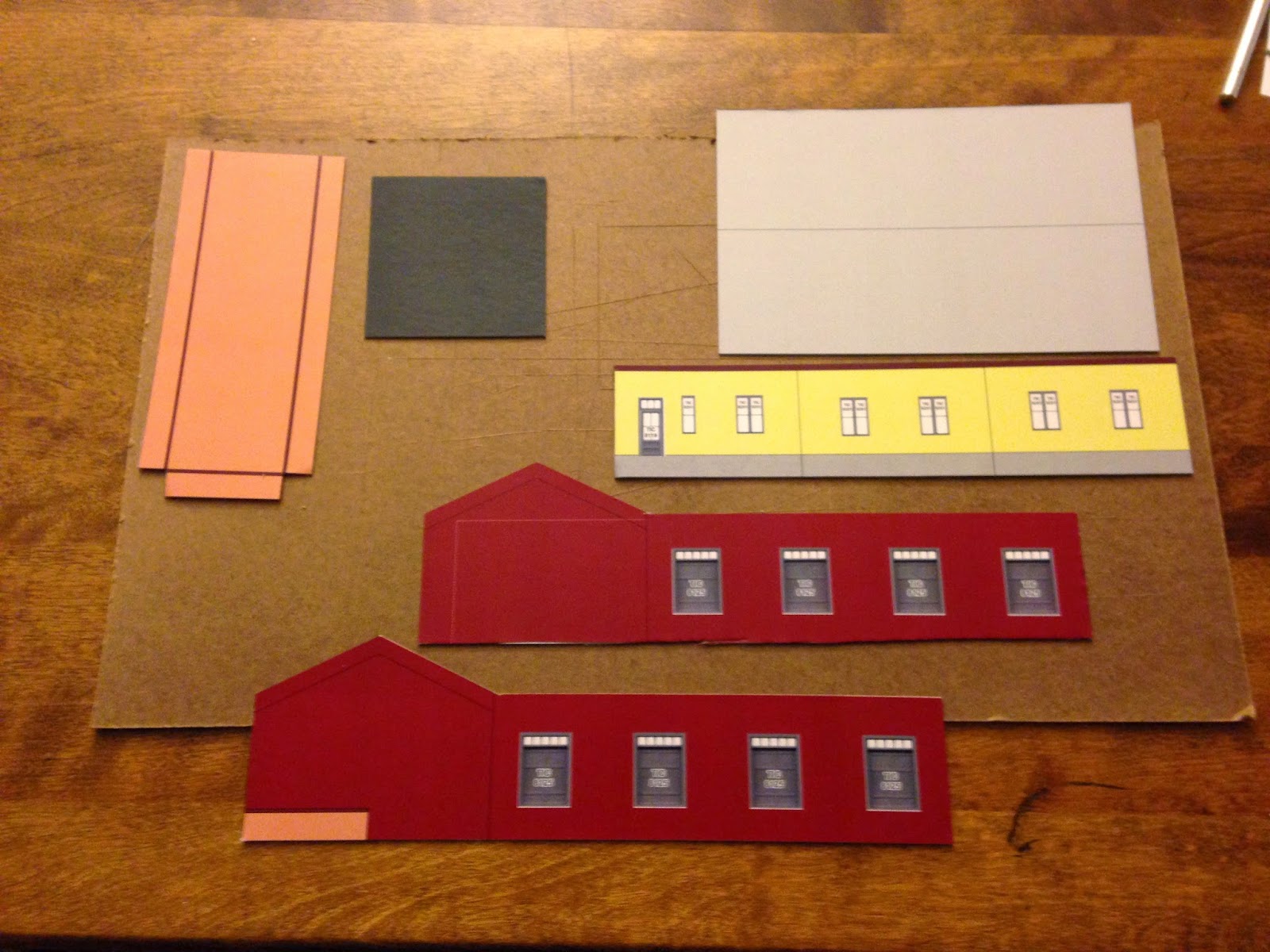 Cutting everything out actually takes a while, and you need to be careful. I used a boxcutter with a metal straightedge on a piece of scrap masonite. When you're done cutting, you have your kit pieces as seen above. 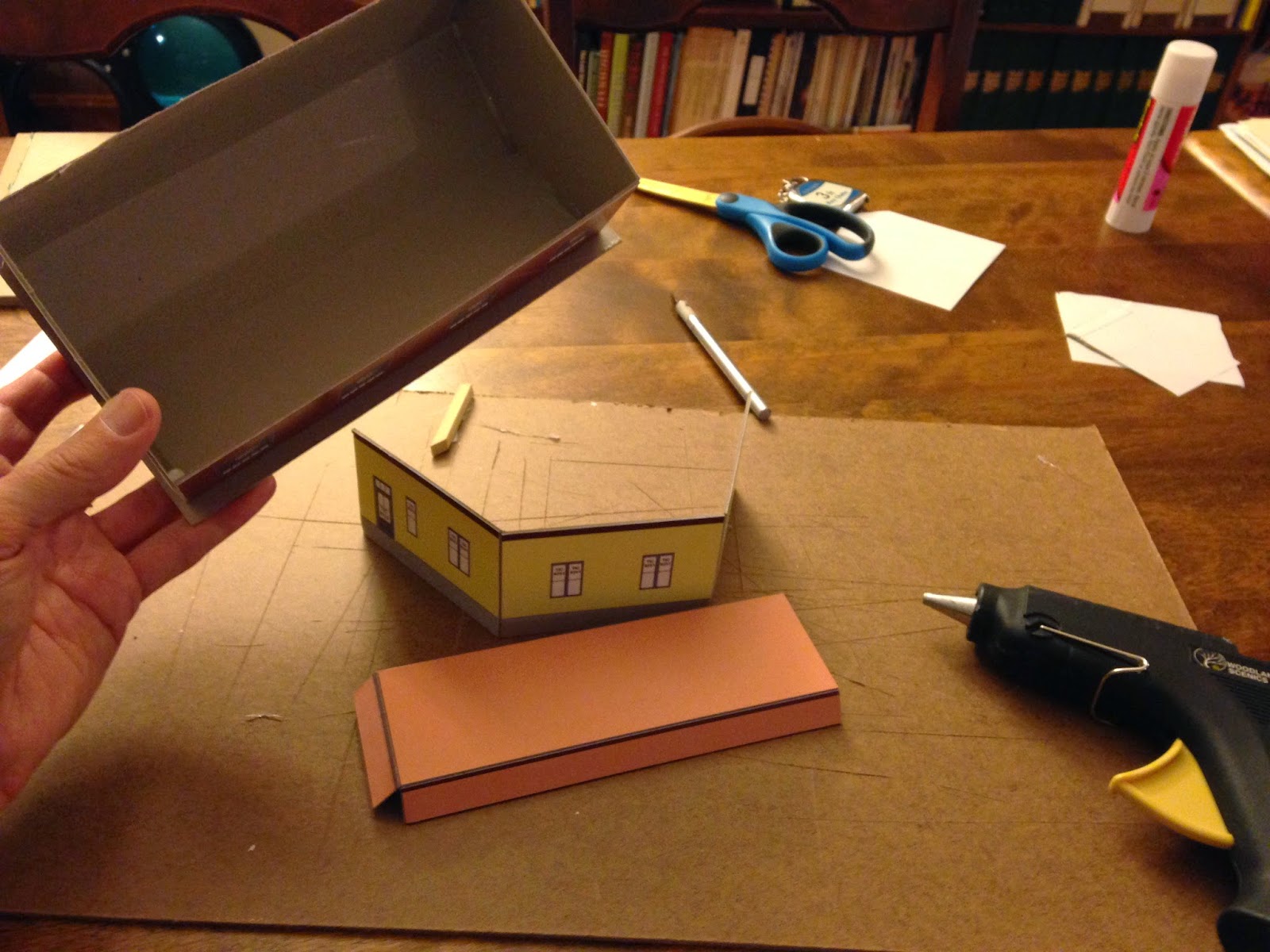 If you have a large enough printer, you can print out multiple wall sections together. Then all you have to do is score them at the corners (on the front side of the wall) and bend. I prefer hot glue for assembly. Most of the assembly time was holding parts together while they set. 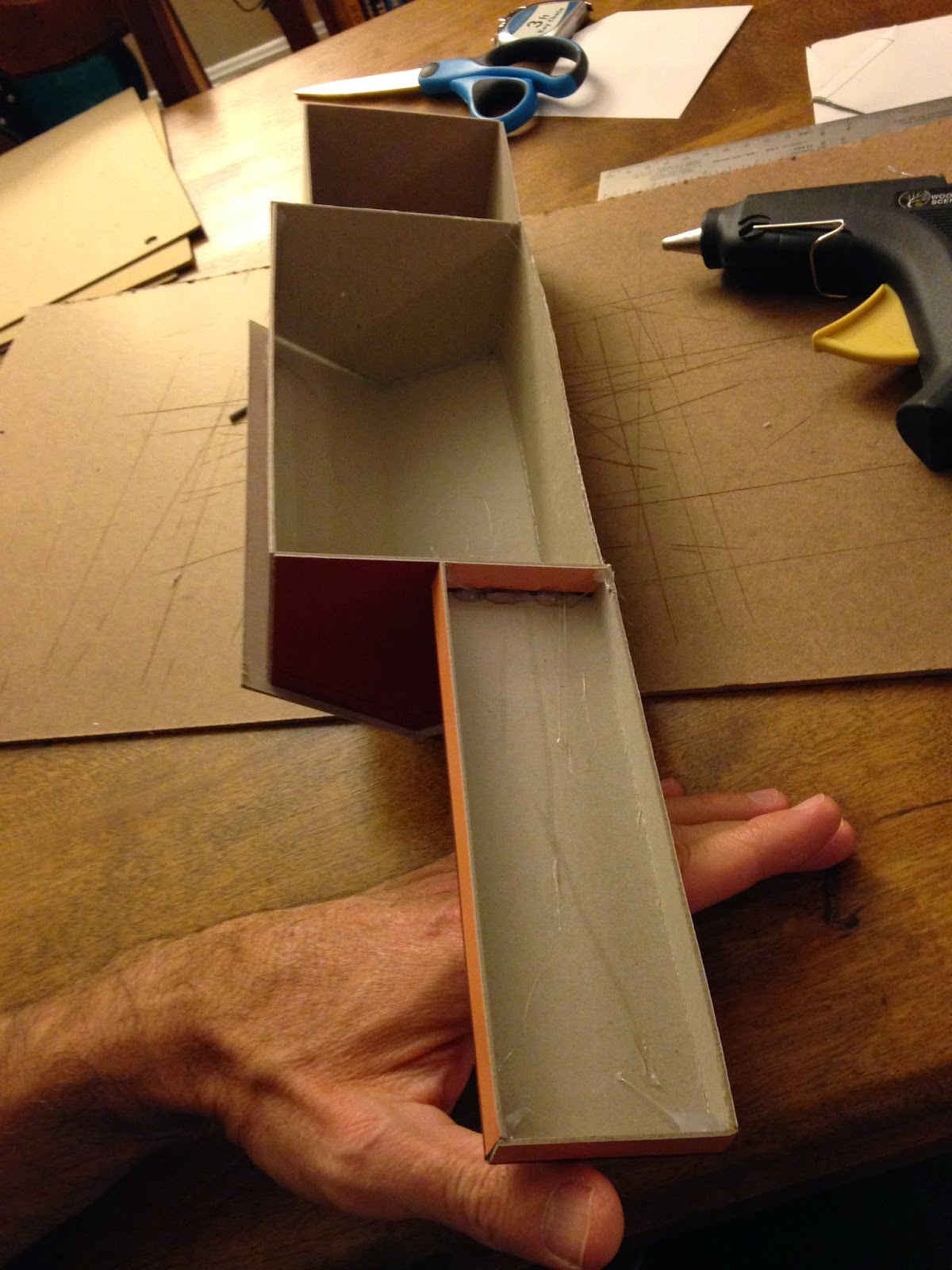 Assembly can get a little complicated when you can't work on a flat surface, as here with the loading dock. There's some freehand holding involved, but the glue sets up fairly quickly - and with a little creativity, you can figure out how to hold things still. You can see here I'm resting my hand on the table and resting the loading dock on my hand while it sets. 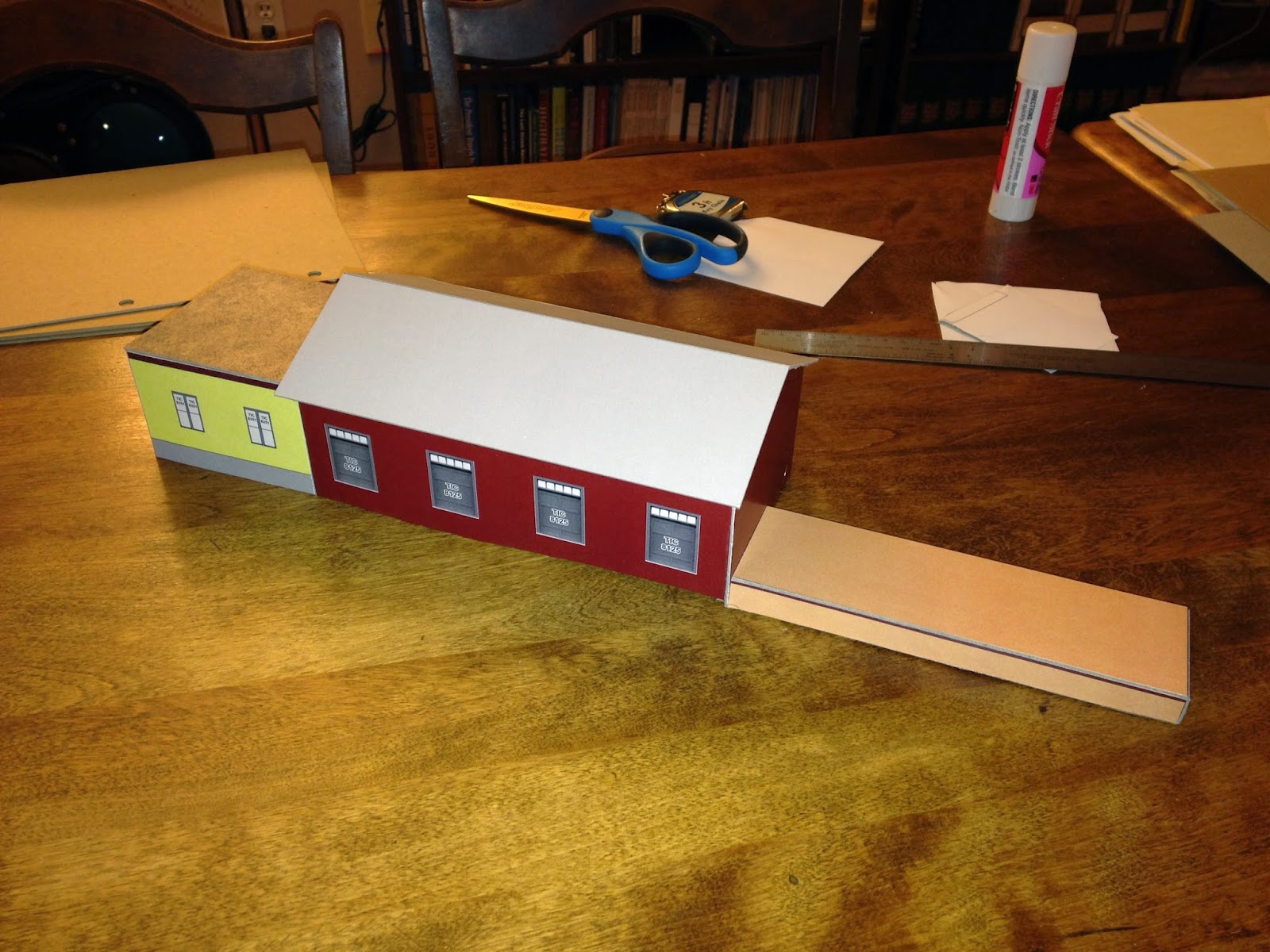 The result is nothing short of amazing. This is way beyond a mere mockup - I'd almost be tempted to let this be the final building. Almost (note Tichy part numbers in the windows :^) After the parts were cut and ready to go, total assembly time: 1 hr 10 mins(!!) - and that was mostly sitting & holding parts together while they set. 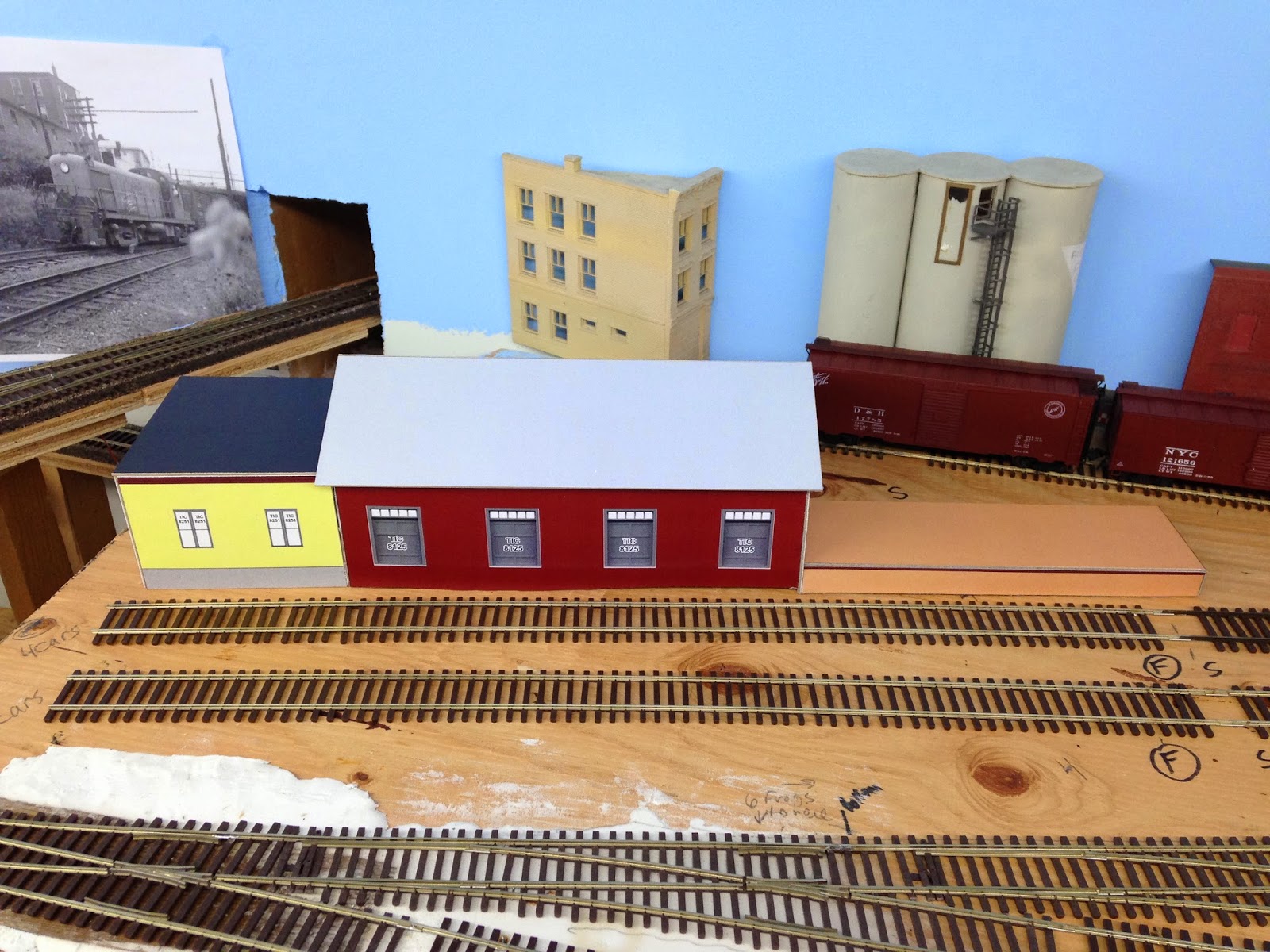 Here's how it looks in the space. You can't really tell from this photo, but it turned out we had a bit more space to the right we could work with - especially if we narrowed the loading dock. So we (Bill) actually lengthened the brick building a bit more. I'll post a photo of the final result later. 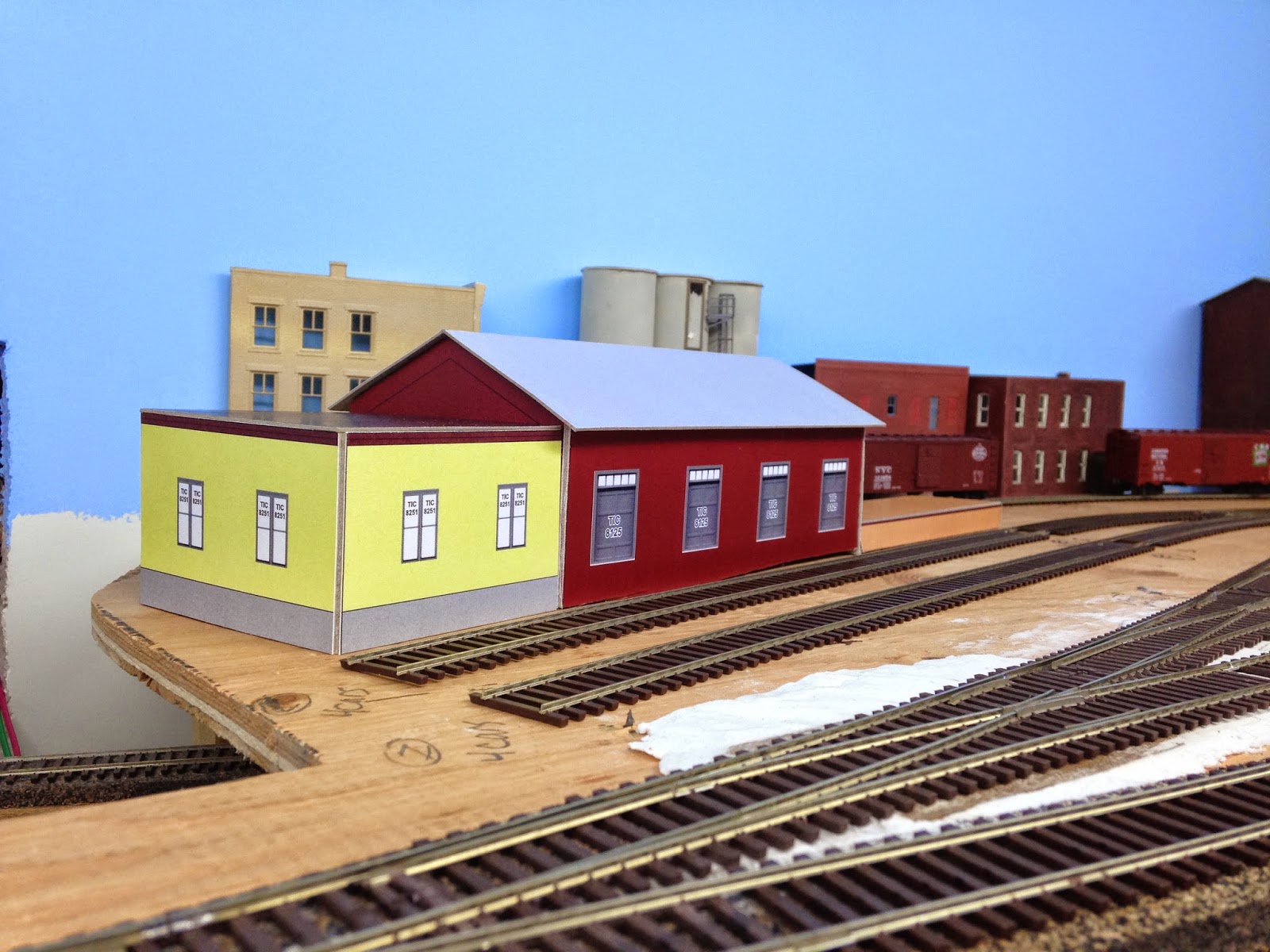 Compare this photo to the prototype photo at the top of this post - I think you'll agree that this building does a great job of conveying at least the impression of the actual Middletown freight house - especially for a mere mockup, albeit a very fancy mockup. And sure, it's nowhere near a scale replica, but I also had nowhere near the space for a scale replica.

But this is where the true Art of model railroad really comes into play, especially for prototype modelers. No matter how much money, time and space we have, there's really no practical way we can ever hope to duplicate the prototype perfectly and with absolute fidelity. Every model railroad, no matter how wonderful, is chock-full of compromises. But the best model railroads work around these limitations and convey the look and feel of the prototype very effectively in spite of them.

I don't at all pretend that my model of the Valley Line is doing that as well as I'd like, but if the Middletown freighthouse is any indication, I think I may be well on my way.
Posted by Chris Adams at 7:33 AM