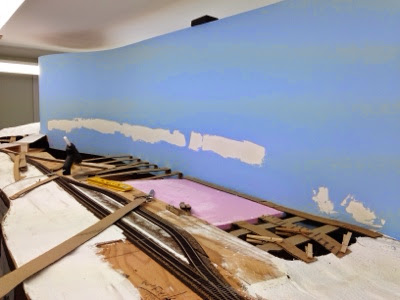 Backdrop extension is done - just one last sanding/painting to go - and cardboard strips are going in, preparatory to plaster cloth.

It remains to be seen whether all this effort to level out the terrain in Wethersfield will be worth the time & effort. But I know the way it was would have continued to bug me, so I had to at least try.

Only major downside is that it's becoming increasingly unlikely that I'll be having an ops session during this, my "favoritest" month of the year.

But at least I'm making SOME progress - and here's the pic to prove it!
Posted by Chris Adams at 5:06 PM