Have you ever been hijacked? Hopefully, not in the usual, scary, sense - but have you ever had your plans hijacked?

After a wonderful (and rare) day of railfanning Friday, I'd planned to get the Middletown Tower done (or just about) Saturday afternoon, and do some airbrushing on some other projects. The Missus and I had a few errands to run that morning, and I'd been planning on getting another dehumidifier for a while anyway, so while we were out I got one.

That ended up being a very good idea. When we got home, I decided to empty dehumidifier #1 so I could start it and the new one at the same time (and see which one would collect more water). I've just been dumping the water outside, but for some reason this time decided to dump it in our sump hole back in the oil tank room. As I did, I noticed that the floor was already wet . . . then I looked around and noticed the walls were wet(!)... then I looked some more and realized that a pipe was spurting water up near the floorboards. ARGH! It had already soaked the wall sills and insulation on top of the foundation - in fact, the water was even dripping outside from underneath the clapboards!

So, already-long-story short - I turned off the supply to that pipe (fortunately, it's only the pipe going to the outside spigots), got out my wet vac and some box fans - and my handy dandy new dehumidifier. Vacuumed what I could, and put the fans onto the rest. As of this morning, everything is nicely dried out - thankfully. Next thing is to get that pipe fixed.

But I didn't get to much modeling - that plan had been thoroughly hijacked.

I have a very supportive Missus though, and she wouldn't let me end what turned out to be a crappy day without at least a little fun. So she helped me pick out some paint and I got to work on the tower for an hour or so. 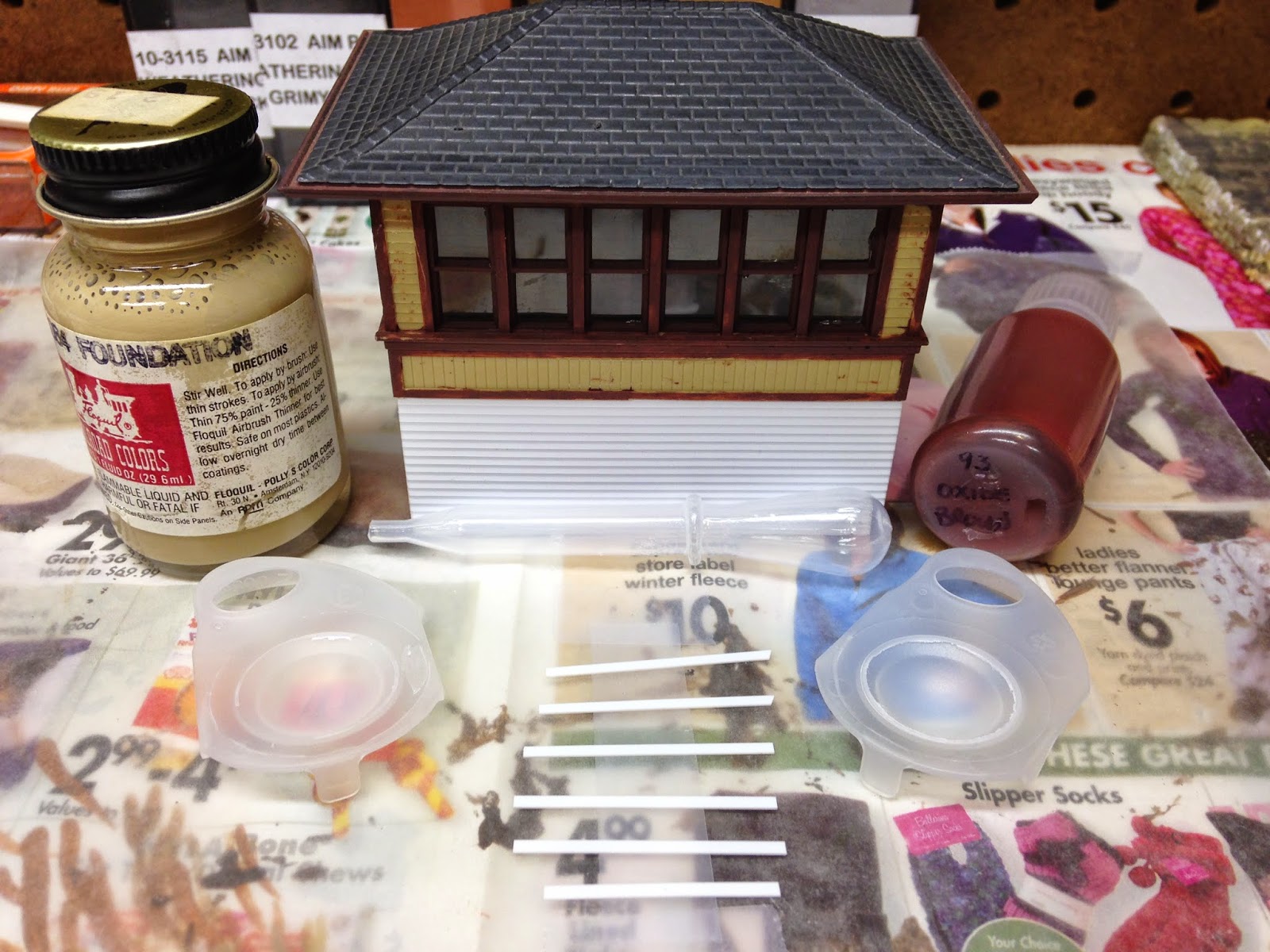 The other night, I got a little impatient and glued on the roof - telling myself that it was "necessary to hold everything square." Only slightly true: I actually wanted to see how it would look. Unfortunately, I'd forgotten to put in the window glazing first. So what should have been a very easy job became a bit less easy. Not quite like building a ship in a bottle. Let's just say I'll never put a roof on a structure before making sure interiors and glazing are done first.

The photo above shows the tower with the roof & glazing installed and everything ready for painting. We chose colors that I had on-hand that were close enough, if not a perfect match: Floquil Foundation for the walls and TruColor Oxide Brown for the trim. A couple of old contact lens packages for pallets, eye dropper to get paint from bottles to pallets, and trim pieces secured to wax paper by scotch tape. While I have many different varieties of brushes, I decided to use a microbrush to paint since I've found they're not as apt to leave streaks - and you can get really close to the trim without accidentally painting it. Any unevenness you see in the wall above is the result of the white styrene showing through - but there's no streaking. Actually, I think the effect is pretty nice. The color isn't a perfect match, but I've decided to go ahead and over-paint the original color on the original wall sections - especially because, it turns out, that that color is no "color" at all, but just the original molded plastic color. So the walls will all match when I'm done. The TruColor paint I used on the trim dries glossy, so I'll have to apply some DullCoat before adding the trim to the structure.

That's where things sit as of now. I have to paint the original wall sections and add the trim, and then put the structure back on its foundation and shorten the staircase. Then it's just a matter of adding the tower to the layout - but since Middletown is still plywood-only, I may go ahead and scenic the area around the diamond so the tower will have a nice scene to be seen in.

Not bad for an hour's work on Saturday night. Certainly redeemed the day, at least a little. And also fortunately, Sunday was much better. Not only did I catch the Amtrak Exhibit Train going by my house, but I got to go to a picnic with a lot of other folks from the New Haven Railroad historical society (NHRHTA). I even came home with an authentic NHRR shanty stove to heat our photo library/railroad den during the winter months. But I'll post a pic and write up on that some other time.

All in all, not too bad a weekend - despite the hijacking!
Posted by Chris Adams at 8:51 AM