Prototype modelers have to become pretty adept at research and some of the common resources I've found that help me include Sanborn Fire Insurance Maps (for industry footprints, track layout), city directories (industry types/names), newspapers (events, often a photo resource).  Connecticut residents can access digital versions of Sanborn Maps and the Hartford Courant with a CT State Library Card.  Here's a link to the state library's database page where you can find more information about these resources.

Of course, I've also mentioned how valuable aerial photos are to prototype research - and I've used those extensively. Apropos the last two days' posts on Wethersfield Lumber Co., these aerial photos haven't been all that helpful. They show the buildings from above, but the photos are shot straight down - so all you really get is the footprint of the building. The lack of photos for Wethersfield Lumber (as well as other industries I want to model) has been a continuing source of frustration.

Well, the Blogoverse once again has come to the rescue, in the form of "Haksaw." He submitted a comment to yesterday's blog post pointing me in the direction of photos of damage from the 1938 Hurricane. I knew about UCONN's and the state library's aerial photo resources - and thought I'd mined them pretty thoroughly - but I'd never run across these!  They're aerial photos, but with a HUGE difference - instead of being shot straight down, they're taken at an angle (click here for an example) and from this perspective you can at least get some idea of what things actually looked like.

The Great New England Hurricane of 1938 (aka The Long Island Express, or more appropriately for a New Haven RR blog, The Yankee Clipper) was second only to Superstorm Sandy in property damage, but remains the deadliest hurricane to ever hit the region. Come September 21st, it will have been 76 years since it made landfall. In the days that followed, these photographs were taken to get some sense of the devastation. Fortunately, up around Wethersfield where I'm looking, the most apparent damage is flood damage. The buildings are still intact. 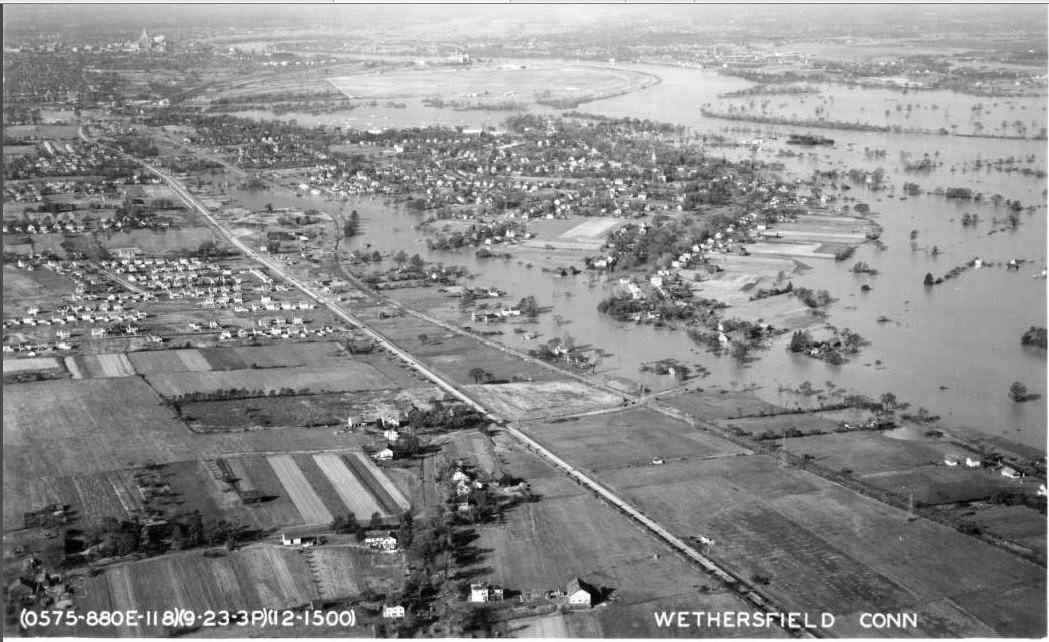 Above is an overview of Wethersfield ("photograph #00026" that Haksaw referred to in his comment). You're looking north and the diagonal line is the Silas Deane Hwy. Waaaay off in the distance, in the upper left hand corner, is the City of Hartford. Note the Traveler's (insurance co.) Tower - and also note how much LARGER it is than anything else in town (a bit of a metaphor, that). Of course, the main thing that strikes you is the flooding of the Connecticut river as a result of the hurricane. And the fact that there are few trees, and everything is so flat.

(BTW, as with all pics posted on the blog, you can click on them to get a larger view)

As we zoom in, you can see what is essentially the Wethersfield side of my main peninsula. You can just make out the railroad curving from near the lower right corner, going under water(!) the re-emerging to head straight north (and toward the upper left corner). In that upper left corner?  Wethersfield Lumber Co. (unforunately, Ballantine's Beer Distributors wouldn't be built across the street until the next year). Follow the railroad line back south and (barely) make out the Wethersfield station and Gra-Rock at Church Street (near the center of the photo), and then further south, inside that curve of the railroad track, you'll see Valley Coal.

That is an absolutely amazing view for this prototype modeler! 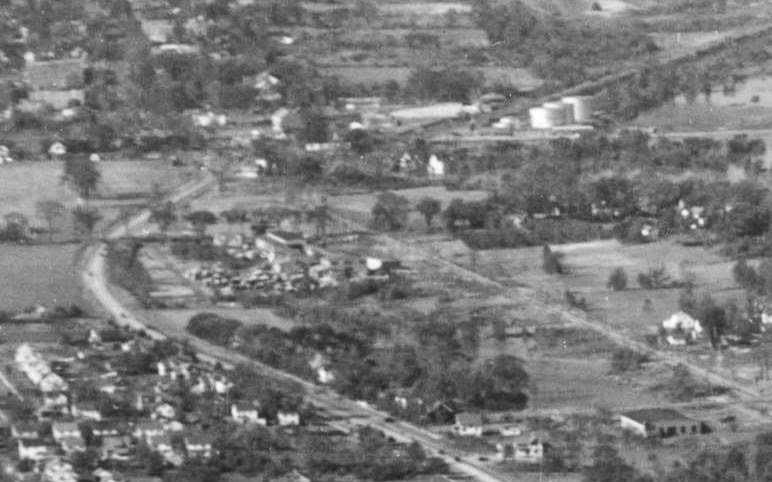 But we were focusing (literally and figuratively) on Wethersfield Lumber.  Here it is! Again, you can just make out the fact that the main lumber shed is the type that the track runs into (confirming the Sanborn map view), and check out all those lumber piles (that would later burn :^(

And, here it is at maximum zoom. The only problem with these photos - and most photos of the era, unfortunately - is that they aren't very high resolution.  So you can only zoom in so far before things go all blurry. But this is FAR more visual information than I've had on Wethersfield Lumber to date - and is certainly enough for me to get started on modeling it, with at least some confidence that it'll be pretty darn close to accurate.

I'm sure I've said it before, and I'm sure you've heard it said more eloquently elsewhere, but one of the pure joys of prototype modeling (and sometimes it's biggest frustration) is the research you have to do to make sure you're models are just right. And the process of searching for and, if you're lucky, actually finding that information is pretty darn close to time travel in my book. The Eureka! moments like these that happen totally outweigh any frustrations or limitations you might feel when following a prototype closely.

Thanks Haksaw for turning me on to this resource. It's certainly given me a great start to modeling the lumber company. Unfortunately, seeing this area being even flatter than I expected, I may end up having to rip out some cardboard lattice and plaster cloth.  All in the time of Prototype Fidelity, of course!
Posted by Chris Adams at 9:34 AM