A Few Words on Wordless Wednesday #30 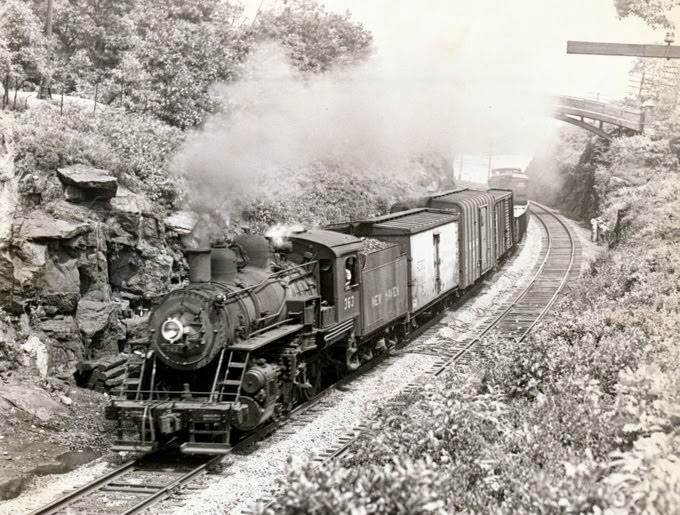 This is not the Valley Local.  It's PDX-2, the New London-Cedar Hill (Shoreline) local at Rocky Neck (East Lyme, CT).  The date & photographer are unknown, though I suspect the photographer may be Kent Cochrane and the date is likely c. 1947. I include the photo here since PDX-2 during this time served the lower end of the Valley Line, swung off the Shoreline at Old Saybrook and headed up the Valley through Essex & Deep River to interchange cars with the Valley Local at East Haddam.

K-1d #363 is doing the honors on what looks like a beautiful summer day, hauling a relatively short - but interesting - train of 6(?) cars.  First car is a reefer of some sort, then a wagontop boxcar, outside-braced boxcar, looks like 2 gondolas, unknown boxcar (PRR X-29?) and caboose - most likely an NE-4 wood caboose (which was built on a shorty boxcar frame in the late 1920s).

Looks like the fireman is dutifully facing forward, as you'd expect. But just a minute ago he probably took advantage of the fact that he was on the outside of the curve (and thus couldn't see much ahead anyway), and on the correct side of the locomotive to check out all the pretty girls on the beach.  You see, Rocky Neck was (and is) a very popular state park with a beautiful beach - and the beach is just out of sight beneath the overpass.

Even if PDX-2 didn't figure in my layout's operating scheme, this would still be a great train to model.  Heck, this could be a great scene to model, given the distinctive overpass in the background and the beautifully manicured double-track Shoreline mainline (are you paying attention PeteL?). If you don't mind the overpass splitting the scene, you could even model the beach - and the bathing beauties, if you were so inclined (though good luck finding period-appropriate figures). It also wouldn't be too difficult to just have the overpass on the left end of the scene and focus your attention on the beach - just like our attentive fireman.

It's photos like these that make prototype modeling (and the time travel that it makes possible) so compelling. Unfortunately, there won't be any room on my layout for any part of this particular scene, but the train itself will definitely play a significant role on the Valley Line.
Posted by Chris Adams at 2:00 AM