A Few Words About Wordless Wednesday #32 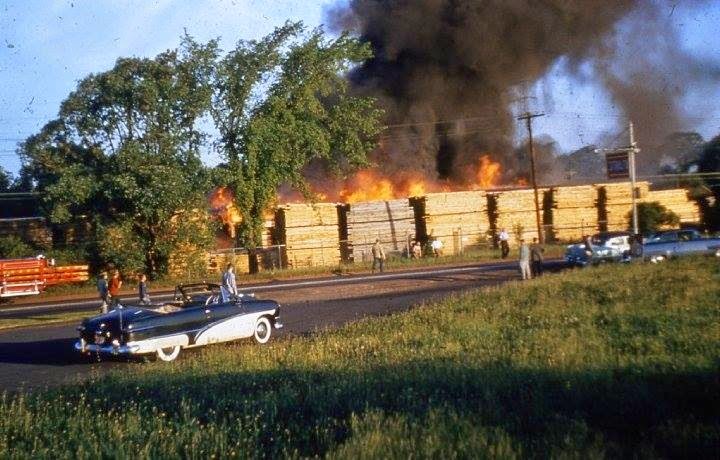 This somewhat disturbing photo (though still neat, given the cars - and that it's in color) is the only known photograph of the Wethersfield Lumber Company (other than a newspaper photo of the fire, taken at night, that shows nothing really - other than fire). The first alarms sounded Friday night, May 20, 1955 - so this photograph was probably taken the next day. The fire was still burning. You can read more about it here.

Not to diminish the tragedy, but from a prototype modeler's perspective this photo is pretty frustrating. I really want to include the lumber company in my model of Wethersfield, but other than this photo, I have no idea what it looked like. And I'd rather not just model stacks and stacks of lumber.

One helpful sort suggested I change my modeling era from October, 1947 to June, 1955 - and just have a pile of ashes and a recently-decommissioned siding. Clever but, um, no.

Until I can find some other photo, I'm going to have to take my best guess based on the footprints on the Sanborn maps. That'll be ok for now and - bonus - if somebody tells me I'm wrong, that's ok. I'll just ask them to give me some evidence that I'm wrong. Of course, a photo would suffice.

In the meantime, if you or someone you know has any photos of the area around Jordan Lane and Silas Deane Highway in Wethersfield, CT, I'd sure like to see them. As it turns out, my other Holy Grail is any photo of the Ballantine's beer distribution warehouse - which was located right across the street from Wethersfield Lumber.

Heh - it'd be so much easier if I was a model railroader rather than a railroad modeler!
Posted by Chris Adams at 4:00 AM