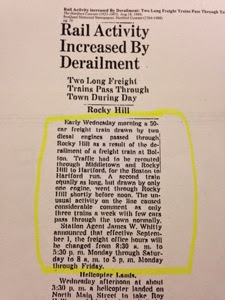 Rocky Hill - Early Wednesday morning (August 17, 1949) a 50-car freight train drawn by two diesel engines passed through Rocky Hill as a result of the derailment of a freight train at Bolton. Traffic had to be rerouted through Middletown and Rocky Hill to Hartford for the Boston to Hartford run. A second train equally as long, but drawn by only one engine, went through Rocky Hill shortly before noon. The unusual activity on the line caused considerable comment as only three trains a week with few cars pass through the town normally.

Station Agent James W. Whitty announced that effective September 1, the freight office hours will be changed from 8:30 a.m. to 5:30 p.m. Monday through Saturday to 8 a.m. to 5 p.m Monday through Friday."

(Makes me wonder whether the trains left the Midland in Willimantic and came down the Air Line to Middletown.  If they did, they would have had to back down that sharp quadrant track at the diamond to then be able to go north through Rocky Hill to Hartford.  Wow!  Though I suppose they could have gone down the Norwich & Worcester to New London, then west to Old Saybrook and then north.  Either way, it was quite a detour!)

(Special thanks to Bob Belletzkie for the article - and if you want to know ANYthing about stations on the New Haven Railroad, RUN don't walk to his website at http://www.tylercitystation.info/)
Posted by Chris Adams at 4:00 PM