(just a heads up - this is a LONG post, but there are lots of pictures and I think you'll enjoy catching up, especially if you make it all the way to the end...)

Thankfully, I've been more in the latter camp than the former - though the posts here have suffered as a result. But I've tried to keep y'all up to date a bit with the "Wordless Wednesday"s - letting pictures do the work of thousands of words. And I tend to post small, very quick, items on the Valley Local FB group, But as Randy reminded me last night, sometimes it's not enough to just post pictures and a few words - sometimes you have to provide a bit more...

The skinny is - October has been a VERY busy month!

Right after my last ops session at the end of September, we started a MAJOR home improvement project . . . 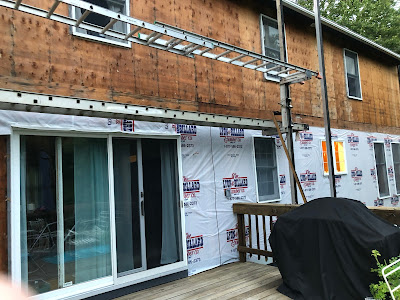 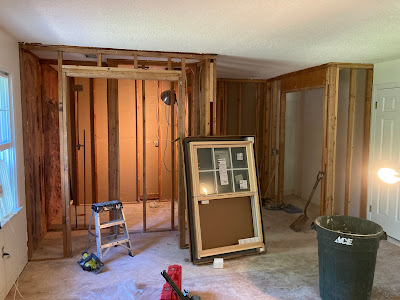 Don't want to clutter a nice hobby blog with home remodeling stuff, but we're residing most of the house and are totally gutting/redoing the master bed & bath. Thankfully, all I had to do was the demo - the contractors are doing the rest.
While taking a break from demolition (and prompted by BillS, who'd been a sometimes-confused Saybrook Tower operator at my last session), I finally got around to changing the Saybrook Control Panel to reflect the changes in trackwork I'd done literally years ago. . .

If you've been following the blog regularly, you've seen the pics. If you haven't, click here. :^) Suffice it to say, this project was a bit scary (which is why I'd put it off for so long) since any mistake would risk totally screwing up the board I'd worked so hard on. Thankfully, it all came out alright - though inelegantly - at the end. . . 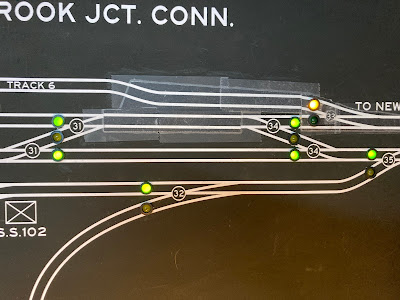 Even the prototype has to make such changes from time to time, so I'm just gonna accept how it looks.

I've also been efforting some engines - trying to make a DEY-3 and a DEY-5 out of a P2k S-2 and an Atlas S-2 - and finishing some freight cars (I've been sessions have been strangely short of cars since Bill needed his returned) . . . 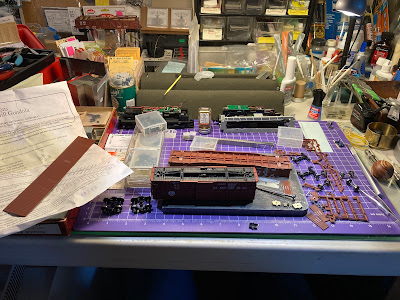 Speaking of locomotives, my first-ever product review came out partway through the month:

And speaking of Bill, I was able to attend his first shake-down ops session on Oct. 6: 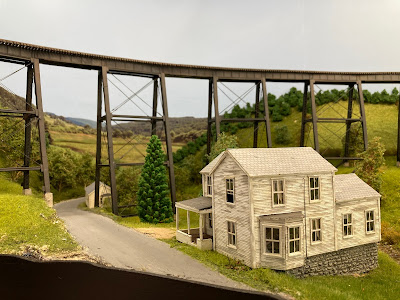 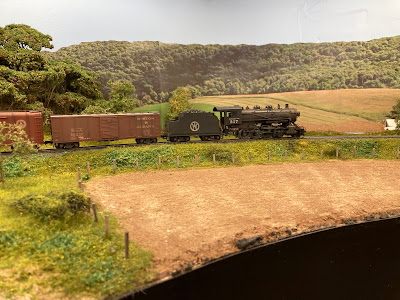 For more pics and a full report, be sure to check out Randy's blog post about it. 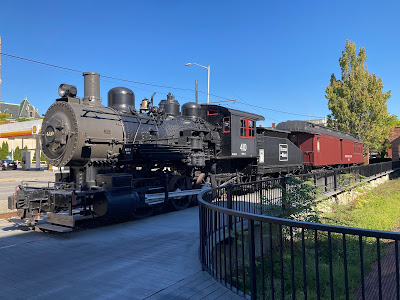 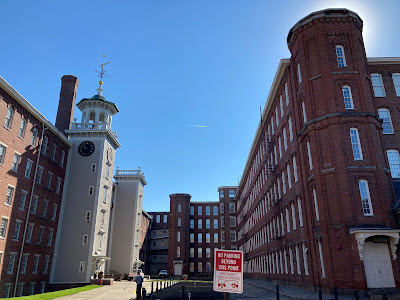 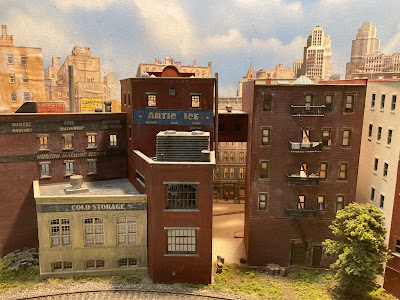 That weekend-long trip really merits its own post - or posts! - so stay tuned for more later...
The next weekend, The Missus and I made our way up to the Worcester Union Station for dinner: 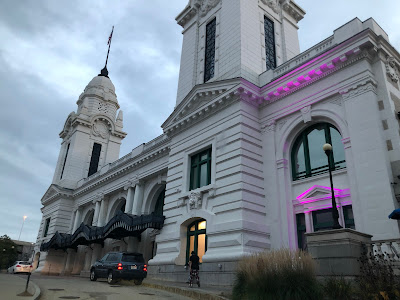 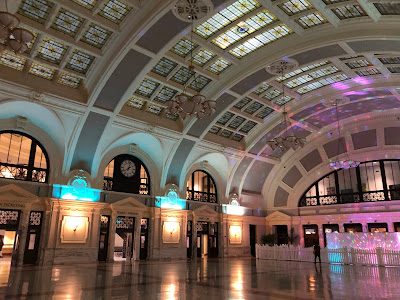 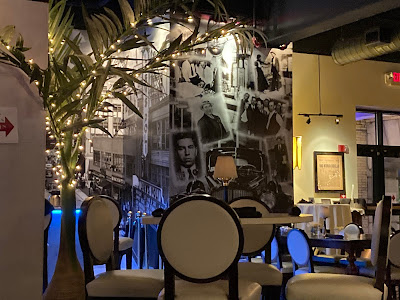 As you can see from the pics, it's been beautifully restored and the restaurant has a cool 1920s/gangster theme. It's definitely worth checking out if you're in the area!

Back to some model railroading though, I found some time to decal a freight car: 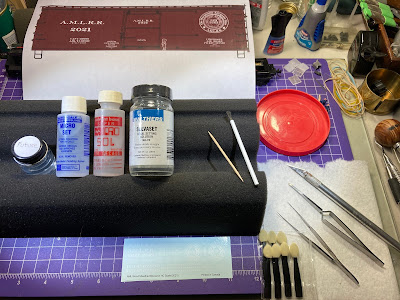 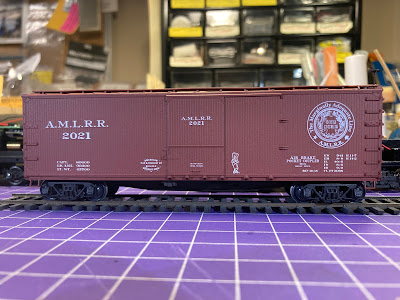 It's been a LONG time (almost 4yrs?!) since I've decaled anything, so I was feeling pretty rusty. But as you can see above, the car came out pretty great. Since I'm sure I'm not the only one to be intimidated by decaling, I'm planning a separate post to go over how I did this car.
Someone (irritatingly) has said - "Embrace the Fear and It'll Disappear." Well, I still have a long way to go in that department, especially when it comes to scenery (despite what follows below), but I must've been in the right frame of mind since around the same time I tackled decaling again, I opened up one of my brass steamers to replace the capacitor.
Apparently, during my ill-fated Shorting Session, K-1b #278 decided to die - at least partially. It would run fine, but the stay-alive didn't work at all. Consequently, it would die going across most of my unpowered frogs. 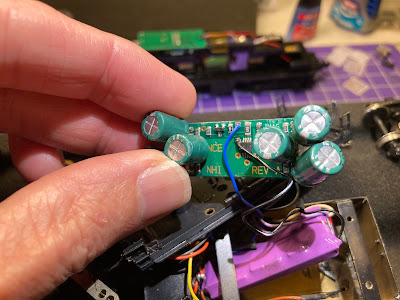 This is what I found when I opened up the tender - an old NCE keep-alive with (count'em) SIX capacitors! And, apparently, not a one of them working. 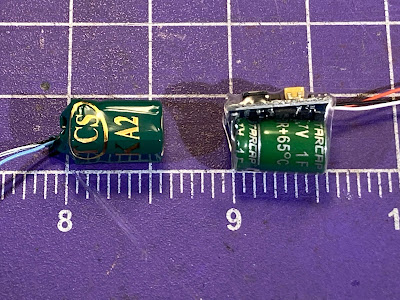 Now, I have on-hand a few Loksound Power Paks (ESU's brand of capacitor), but they require three wires to allow them to be easily turned off for programming. Thanks to a recommendation by KayleeZ, I got one of the new TCS KA2 capacitors which have only two wires (just like what I was replacing) and is actually slightly smaller than the PowerPak! 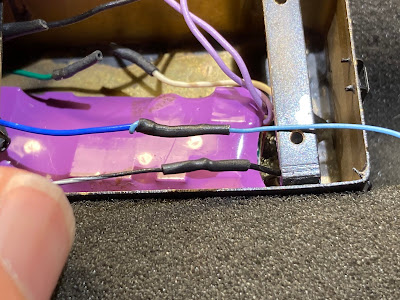 So it ended up being just a matter of cutting the two wires of the old capacitor, matching the wires, and splicing/soldering in the new capacitor. Now the 278 is ready for its next assignment! 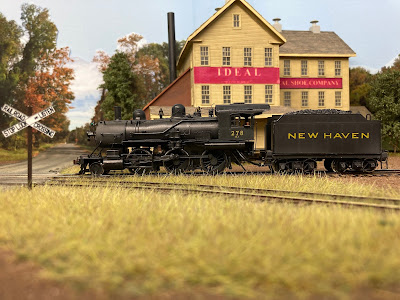 As if all that weren't enough to do during a very busy month, I took a little inspiration from the remodeling project and did a little painting... 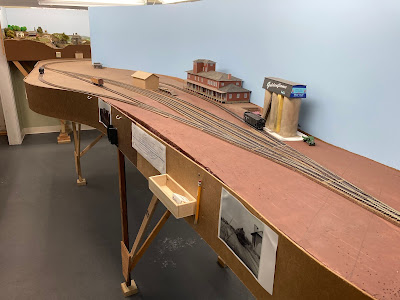 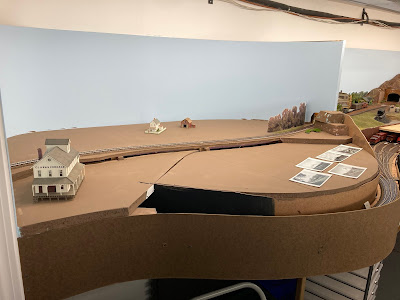 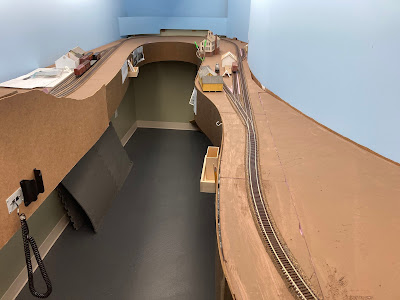 One of my (growing list of) Canadian friends, DeanT, has been on me for at least 7 years to cover up the pink foam with some paint. And I've just put it off, figuring it'd be a waste of time since I'd take care of it when I did scenery in the area. Well, it's been 7 years and there's still no scenery in these areas. It only ended up taking me a couple of hours and a roller to make Essex to East Haddam look SO much nicer!
So, speaking of scenery. . . .

It's been since January that I started (re)working on the scenery in Dividend, including my first-ever rock cut. And now that my ops session electrical issues have (hopefully!) cleared up - and since I'm staring down ANOTHER ops session, this time with some first-timers - I thought it'd be good to have some actual progress to show...

Here's where I'd left off: 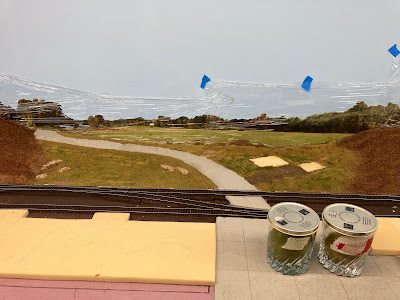 I'd reworked the track here (back in July 2020?!), and added foundations to and pavement around the Hartford Rayon buildings, but the only scenery (other than a nice cut and some rocks) was green and "burnt grass" Woodland Scenics groundfoam, outlines for a house and garage - and a photo backdrop, covered in cellophane to protect it from what was supposed to be imminent additional progress.
And it sat that way for another 10 months :^(
But again summoning whatever motivation has taken hold lately, I decided to get out the static grass applicator and make some progress. ANY progress. I still have a long way to go before this area is complete, but the results so far are encouraging...

I'm certainly no Tom Johnson or Marty McGuirk, and setting them as my standard more often frustrates me into doing nothing rather than make even incremental progress. All too often, my reach exceeds my grasp. But if there's one lesson I'm learning this month - and RElearning over and over again - it's that you have to at least do SOMETHING in order to get better at it. The road to skill & progress is paved with practice. And you'll never get to where you want to go if you don't get moving.

So that's what I've been doing this month - moving, though in a LOT of different directions at once. The house project continues, my locos are improving, I'm adding more freight cars to my fleet, and I'm even - surprisingly - making some progress with my scenery. I'm in one of those rare modes/moods where I'm seeing opportunities everywhere I look and have enough variety of things to do that I can Always Do Something.

Long-time readers know my natural bent is to work only linearly - one project at a time. And, unfortunately, like a malfunctioning Roomba, if I hit a wall, I'll just keep banging against that wall - trying to get through it, wasting time. Thankfully, I've discovered with all these project that I can always pivot to something different. If I hit a wall, I just take a step back and go at something else. Roombas work better that way, and model railroaders make more progress that way too.

But it certainly makes life busy - I'm always doing something rather than just sitting around. Right now though, after going over everything that's happened these past few weeks, I just want a nap. And if you've made it this far, you probably need one too.