Well, it's only a "Throwback Thursday" because we have to go "way back" to New Year's Day/weekend for the content of today's post. But good news! This also means the blog is slowly - but surely - catching up to Real Time . . .
I needed to add a scenic divider between Dividend and Cromwell, and thankfully, this area on the prototype suits itself to the task nicely. While the Valley Line follows the Connecticut River most of the way, just south of Dividend it turns inland (or, rather, the river runs further to the east) and goes up and over the ruling grade on the line. So a hill here - and a cut - is perfectly appropriate and plausible (though, admittedly, I'm not following a specific prototype scene).
The area from Dividend to Rocky Hill proper, while hilly, also has some less hilly spots of farmland. So I wanted to be sure to replicate that as well (and removed some hills - and even lowered the backdrop - to make that task easier) - especially since that would also allow me to include a small house, complete with brown rayon weathering.*
So follow along in the captions as I describe how I got started . . . 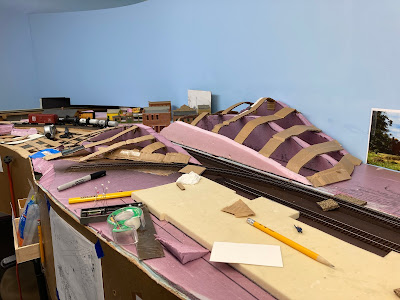 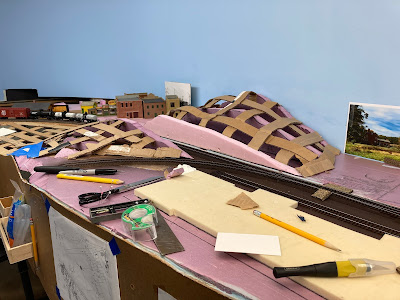 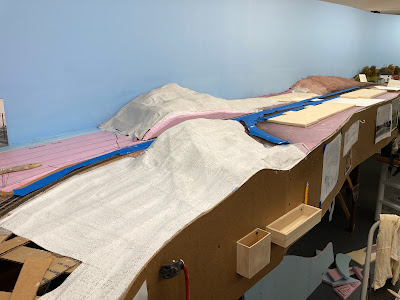 So far, none of these steps are difficult or require any special tools or talent. The main challenge, at least for me, is to figure out where exactly you want the contours, how high, and what "footprint." If you're a prototype modeler, trying to replicate a prototype scene, that can be a little challenging (unless you're following a photo). But for the most part this step of the process is pretty easy and gives you a big bang of progress for the time spent.
While I'm happy with how this is looking, the cut looks a little too - I dunno - "even"? "Perfect"? Not sure, but it definitely needs something - probably more variety in the contour along the top edges.
But at this point, I'd run out of time for the weekend - and wanted to take some time to step back, sleep on it, and see what - if any - changes/additions I might want to make.
Over all though, it's just nice to be making some progress on this scene. It's definitely coming along! Next time, I'll tackle adding rock castings to the cut so it actually looks like a cut through an actual hill. I've never done anything like that before, so be sure to follow along and see if I learn anything new!
* * *
*I'll try to explain further at some point, but suffice it to say here that John Wallace specifically recalls white-painted houses near Hartford Rayon always having a dusting of brown on them - a byproduct of the emissions from the rayon manufacturing process. Replicating that in this scene preserves that memory and gives me an opportunity to share that story. It's sharing little historic details like this that's such a big part of the reason I'm a prototype modeler.
Posted by Chris Adams at 9:01 PM