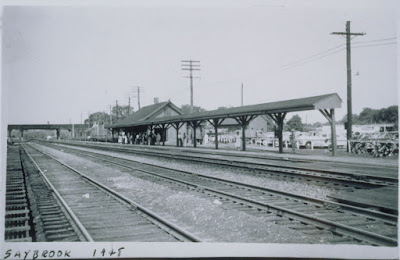 It was 71 years ago this month - the Friday of Labor Day Weekend, I'm told - when an 8 year old little boy went down to the Old Saybrook station platform to watch trains. The sun was going down - it'd be totally set within a few minutes - and in the gathering dusk a dull roar like thunder could be heard . . .

He knew that the approaching train had just crossed the Connecticut River and was accelerating hard off the bridge. It sure sounded like it - and the distinctive bark meant this train had to have a steam locomotive on the point. And with it being a little past 7, that meant it had to be The Merchant's Limited.

I meant to write this closer to - if not on - the actual anniversary of this event, which is all - mostly - verified as true. John often mentioned visiting his grandparents in Old Saybrook and going with them down to the station to watch the trains go by. And he remembers seeing the double-headed, steam-powered Advance Merchant's Limited the Friday evening of Labor Day Weekend, 1948. It was that event that he always pointed to as the inspiration for getting into model railroading and trying to recreate the New Haven in HO scale.

In fact, all of his layouts - all featured at one time or another in books or the pages of Model Railroader - were firmly set in space and time: Southern New England's New Haven Railroad was the space, and the time could only ever be "September, 1948."

Now, almost six years after his passing, I'm closer than ever to being able to recreate this memory in miniature. I have the Old Saybrook station scene as a highlight on my layout and, while I don't mind varying my chosen era within the narrow confines of "1947-1949," for all intents and purposes I'm modeling the Autumn of 1948.

* This post originally appeared 9/27/2018, 70 years to the month since the event took place. I've reposted it not only to commemorate such an important time in John's life, but to remind myself that preserving these memories is one of the reasons for embarking on this project in the first place.
Posted by Chris Adams at 12:01 AM