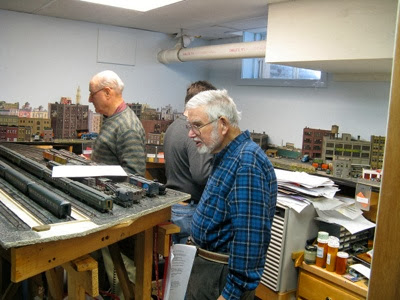 While 2013 has been a great year in many ways, it's ending on a sad note.  On the day after Christmas, I heard that friend and fellow modeler John Pryke had passed away.  He'd been sick for some time, but I'd received a "test" email from him a little over a month ago (he was no stranger to computer issues) and I replied asking him for an update.  Unfortunately, I never heard back.

Any time I think of folks that have been a great influence on me in the hobby, John Pryke comes first to mind.  His was the first layout I saw that depicted the New Haven Railroad, and his frequent writings in Model Railroader magazine gave me, and other NHRR modelers, lots to be proud of and lots to (try and) emulate.  John's chosen era was September, 1948 and while my choice for the longest time was firmly in the diesel era of 1952, John eventually persuaded me that the Steam Era was far superior.  Due in no small part to his influence, I eventually backdated my railroad to October, 1947 (even further in the past, I enjoyed reminding him) and became an avid "steam era" modeler.

I always enjoyed hearing John tell the story of how his passion for the New Haven Railroad was ignited: he would tell me of a time in September 1948 when he was on the platform of the Old Saybrook railroad station and saw a double headed steam passenger train going by. When I moved to Old Saybrook a few years ago, I enjoyed letting him know that I would eventually be modeling the station area and would be including an HO scale version of him on the platform as a youngster.

John's influence in the hobby is long-standing and pervasive and I consider him one of the giants - up there with the best of them.  My condolences go out to his wife Sandy and the rest of his family. I'm so thankful to them for sharing him with us.

Email ThisBlogThis!Share to TwitterShare to FacebookShare to Pinterest
Labels: Influences