For a while now, the tagline of my Valley Local project has been "Modeling the New Haven Railroad's Connecticut Valley lines, c. Autumn, 1947 (or 1948, or '49)" and that's done a good job of conveying the layout's locale, as well as the season (neither of which are easily changeable). But the chosen year hasn't been chosen with any real finality... until now.

While I initially focused on Autumn, 1947 (since that was the last year of the "all steam" era in the area - click here for that analysis), it wasn't long before my era "creeped" to as late as 1949. And additional research on these "bookend" years of 1947 & 1949 revealed an interesting fact: the New Haven's all-steam-to-all-diesel transition in the CT Valley was just 3 years: 1947-1949 (thus, my tagline). Here's a synopsis of motive power on the layout in each of those years: 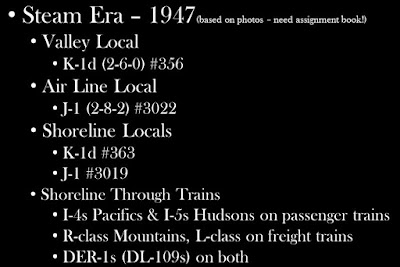 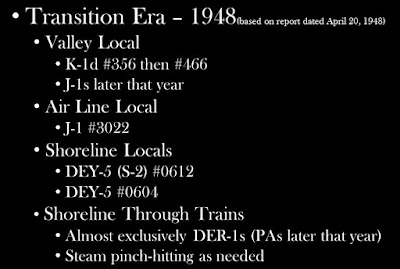 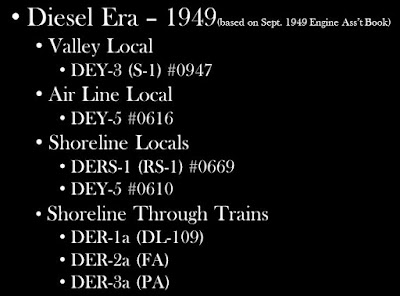 I still plan eventually to host ops sessions focusing on each of these three years since it'll be neat to have my operators know what year it is by what motive power is assigned to their train (oh, and there'll be an era-appropriate calendar on the Bulletin Board as well, in case they don't get the hint...). But recent ops sessions on the Shore Line have prompted a further focus on the Fall of '48. The choice of season is obvious (you can typically scenic your layout for only one season), but here are some of the reasons for the year:

Most model railroaders focus on a broad era ("the 1950s" or "the steam-to-diesel transition"), but if you're into doing really deep-dive research, you find out pretty quickly that it can be a rabbit hole and the deeper you go, the more you learn (and, the more you realize you don't know). That's not to even mention how expensive it can get, having to equip a layout with multiple years' worth of rolling stock and engines - especially for a railroad like the New Haven, which rostered an impressive variety of equipment over the years.

But that research is just another one of the many fun facets to this great hobby. And choosing one year to focus on primarily (I'm still planning to occasionally go totally crazy and do a 1947 or 1949 session) will get you even deeper into the era - and make the time machine you're trying to create with your modeling as vivid and realistic as it can be.
Posted by Chris Adams at 3:30 AM

Email ThisBlogThis!Share to TwitterShare to FacebookShare to Pinterest
Labels: Choosing an Era, Operations