It's been so long since I worked on the B&O P-11 flatcar (since Thanksgiving weekend, in fact) it feels like it should be the subject of a "Throwback Thursday". . .

This project has been sitting on the bench since coming out of the paintshop, but there has been progress - of a sort. Ted Culotta generously sent me an early Christmas present - a couple sets of new decals for the car. And I've been giving a lot of thought to how to proceed with assembly. I vacillated between weathering the frame & deck separately before assembly, pushing forward with assembly, adding the decals before proceeding with assembly, etc.

You probably know how the story goes . . .

But I finally decided to just follow the instructions and continue with assembly. Then I took some time to decide on what adhesive to use to attach the deck (contact cement, canopy glue, CA) and settled on my first choice: thin CA.

I took some time centering the deck on the frame as perfectly as possible, and then clamped it in place using clothespins (which are lighter-touch than the usual spring clamps I use). 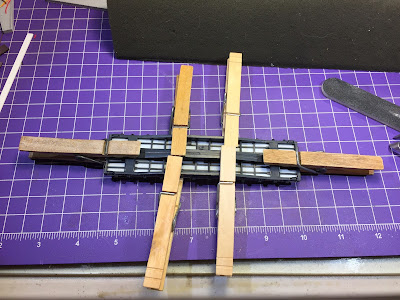 Then I put a bunch of drops of Thin CA in a bottle cap and used a microbrush to apply it to all the deck-frame joints I could reach, allowing the CA to wick into the joints.

So that's where it stands for now. I often use CA accelerator to harden the joint immediately, but I have the time to let it dry/cure overnight so I figured that'd be best. I just have one concern . . .


Can CA go bad? I know that it can harden in the bottle, rendering it useless. But I've done a good job preserving this bottle (I put it in a zip-loc bag, expel the air, seal it and wrap a rubber band around it) and I've had it for at least a few (5?!) years. Assuming it's still liquid, does it retain its adhesive quality indefinitely? Hoping some of the more experienced modelers out there will weigh in!

Next steps will be to decal and weather, then add the brake wheel and cut levers (adding them last to protect them from handling). Then trucks, couplers, and the first revenue run! But with Christmas fast approaching, I doubt I'll be able to finish this car anytime soon. Heh - it may take a while for that CA to cure . . .
Posted by Chris Adams at 12:01 AM