As I alluded to in an earlier post, New Haven R-1 #3304 is in the backshop. I'd been having intermittent trouble with it (it'd randomly decide not to move, despite the sound working) and I suspected the decoder to be the source of the trouble. This Bachmann Mountain-type came "DCC-ready" way back in 2003 and was the first engine I ever converted, using a Soundtraxx "drop-in" decoder/speaker combo intended for a Bachmann 2-8-0 (so it was my first sound install as well).

While it's been serving me well these past 14 years, the sound was starting to sound dated - and the motor control problem was the final straw. I also wanted to try Loksound's new Full Throttle steam sound so, having a Loksound decoder on-hand (and an iPhone speaker), I figured it'd be a good time to attempt a conversion.

If you'd told me a year ago that I'd not only be able to disassemble a steam loco, but I'd be willing to remove & replace all of its electronics, I'd have called you crazy. But after attempting a few projects which others thought crazy, this didn't end up being all that intimidating. You just have to be methodical, take your time, be patient - and keep good notes!

Begin by disconnecting the engine from the tender (being careful of the wiring harness/plugs), and remove the tender body shell (remove one screw and lift like a clam shell). To remove the boiler, first remove the front and rear trucks for access. There's a screw holding the smokebox to the cylinder yoke, and a screw toward the rear of the engine holding the back end.

Once those are removed, the boiler comes off. I then removed the old SoundTraxx decoder. Thus:

Next, lift the weight - which includes the motor - from the chassis, being careful of the wires. Fortunately, it lifts right off and there's no need to disassemble the chassis/running gear any further. Thus:
By far, the biggest challenge of this conversion is figuring out what all the wires do and where they come from/go. Unfortunately, Bachmann did not use NMRA color coding on the wires - and, in fact, some of the wires that do totally different things have the same color(!!). So the best (and, unfortunately, most tedious and fraught with risk) approach is to physically trace each wire and note where it comes from, where it goes, and what it does. 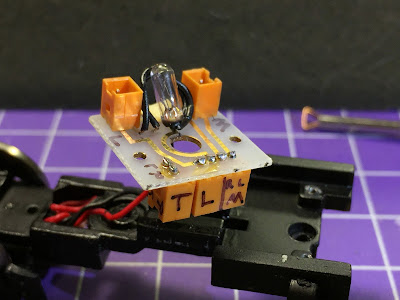 Part of the note-taking process involved physically marking the sockets with what wires go to them. In the photo above, I've unattached the small PCB at the back of the frame to 1) allow me to better see where the wires go, and 2) to make it easier to mark up. "T" is for track, "L" is for light, and "M" is for motor (left and right - I marked the "T" socket on the side for left and right as well).

Once I knew where all the wires on the engine side were coming from, it was time to figure out where they went in the tender. This is the PCB in the tender:

Note all the extraneous stuff (capacitors & snubbers & such) that Bachmann added to comply with world-wide electronics standards. You don't need any of that stuff in the US (and maybe Canada?). I'd be getting rid of this board since I planned to hardwire a new socket, but first I needed to trace all the wires as I did on the engine. 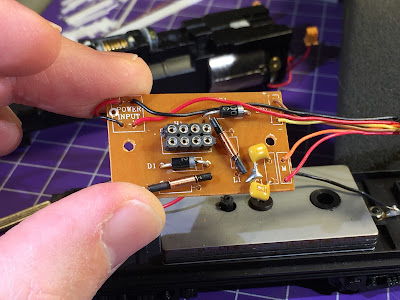 Removing the two tiny silver screws allowed me to remove the board to get at all the wire tracings.

And - inexplicably - I discovered that Bachmann had reversed the colors of the track/wheel wires coming from the engine (right side) and the ones coming from the tender wheels(!). I made special note of that fact. 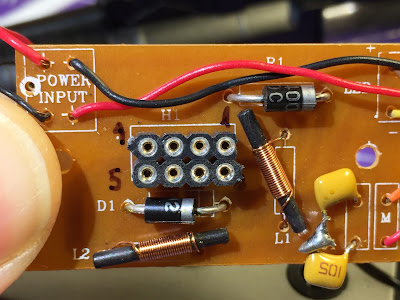 I then traced the rest of the wires, noting which wires went to which socket and numbered the sockets according to the NMRA standard (of course, this exercise was made all the more difficult given Bachmann's color choices...)

Next, I cut all the wires attached to the PCB (ouch!), leaving me with a wiring harness to which I would add a new socket later. 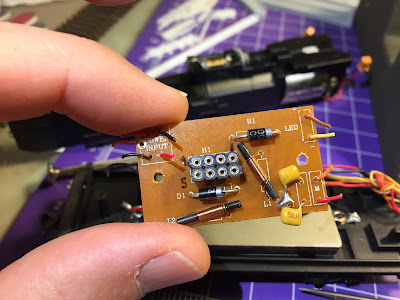 I then turned my attention to the decoder, well, "a" decoder. Since I didn't want to risk frying a brand-new Loksound decoder, I decided to "plug" an old NCE D13SR motor-only decoder I had lying around (also from 2003, likely) for testing/diagnostic purposes. 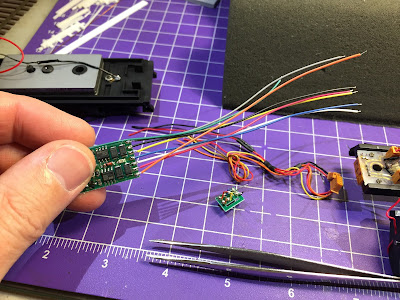 For a plug, I used one of the plugs I'd snipped off of one of the Loksound decoders which I hardwired into my FAs.


The good news is that the snipped plugs had these little pigtails of wire to solder to. The bad news is that those pigtails were REALLY tiny! It's delicate, close work, but remember to add heat shrink tube to the decoder wire before soldering it to the pigtail, use a little flux, tin both wires, twist together, then touch with the iron. Finally, slide the shrink tube over the joint to insulate it and apply heat to shrink it in place. 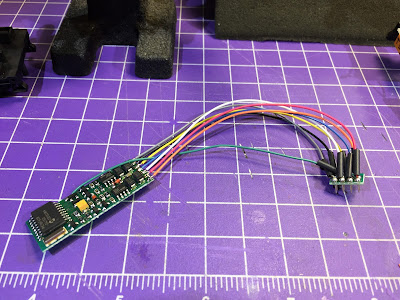 And here's the NCE decoder all "plugged."  Hindsight being 20/20, next time I'll cut the wires all to similar length first so I don't get a kink caused by the shortest wire like you see above. 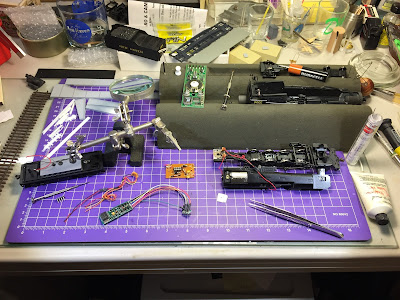 And that's where things stand at this point. The next step will be to "socket" (add a socket to) the wiring harness that we cut off the old tender PCB. Once that's done, we can plug the NCE/test decoder in and confirm proper operation. Then we'll know for sure that the more-expensive Loksound decoder will work and we won't let the smoke out.

If you have any tips/suggestions/guidance, please be sure to chime in. In the meantime, stay tuned for more DCC adventures!