As I mentioned last time, the next step on this decoder install is to add a socket to the wiring harness which I removed from the PCB in the tender.


It would have been great to not have to add a socket - and I suppose I could have just hardwired the decoder directly to the harness - but it's not as difficult to do as I thought it would be. And it allows me to test my install with an old decoder which is easily removable. 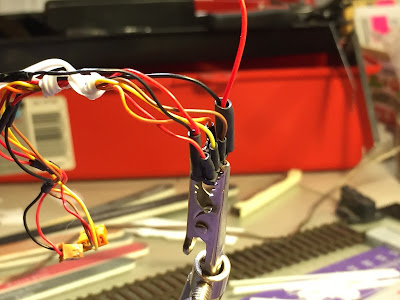 As with soldering wires to the plug, just remember to add heat shrink tubing to the wires beforehand, strip & flux the wire and tin the wire and pin. Bend a little hook in the wire, wrap around the pin, touch with the iron, and slide the tubing down to cover the connection.

Remember to solder the track pickup wires from the engine and tender together first before solering to the pin on the socket. And you'll need a larger bit of heat shrink tube. Yeah - I'd forgotten ALL of that and had to redo it. 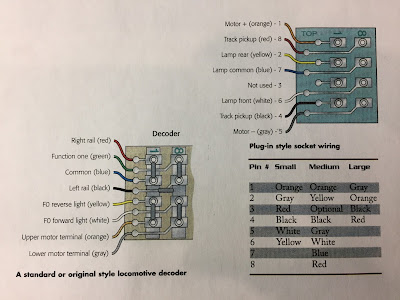 VERY IMPORTANT: As with the plug, be sure and solder the correct wires to the correct pins. Unfortunately, you cannot rely on the wire colors on the Bachmann harness - you'll have to refer to your notes about what each wire does and attach it to the correct pin. 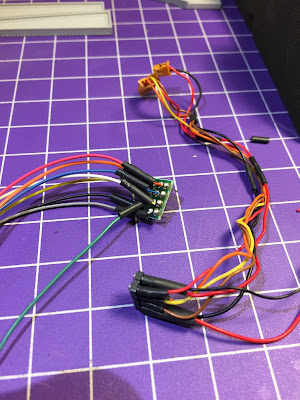 And above is the finished socket on the harness on the right, with the decoder plug on the left. The two "stray" wires (black & red) going off-photo to the right will be attached to the tender truck track pickups. 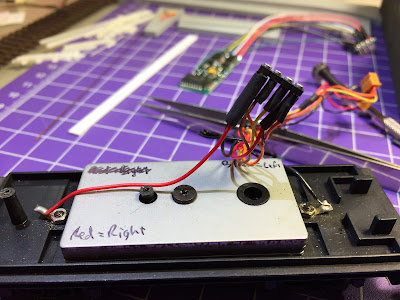 And here's everything reconnected in the tender: track pickup wires connected to the tender trucks, 8-pin socket, and wiring harness with the socket on one end and the engine-tender connectors on the other end.

I then plugged in the NCE/test decoder, powered up my NCE Powercab, cycled through the menus to activate the Programming Track, put the engine on the test track, then connected the alligator clips to the track. I figured this'd be the safest way to proceed.

Then I went to read the decoder - "No Decoder Found" was on the readout. No problem - I'd just turn the plug around. Then the readout said "Short Circuit Detected".

I double checked that everything was wired properly. And it was - kinda. By that I mean that the wires on the plug were perfect (it helped that the wire colors were NMRA standard and I had another decoder to use as a guide). And it looked like the socket was wired correctly - then I realized I'd made a mistake:

At first I thought I'd have to undo all my work - cut off all the shrink tubing, unsolder all the tiny wires, and reconnect everything the right way. But then - in keeping with the spirit of the season - I got a Wonderful, Awful Idea:

I'd just saw the plug in half and reverse the sides! 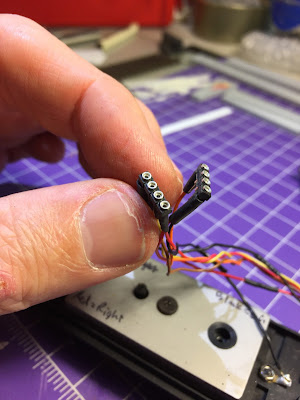 Yup - that's what I did. And yes, it was a little tedious, and I had to use a very thin-bladed razor saw, and I had to be careful not to nick the tubing or wires. But I did it - and I'd like to think it took far less time than undoing/redoing everything. At least that's what I choose to believe. 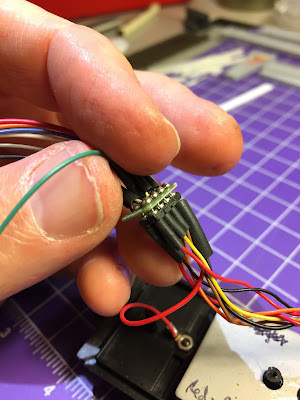 I plugged in the test decoder again, put the engine on the programming track, and - Christmas Miracle of Miracles - it worked! 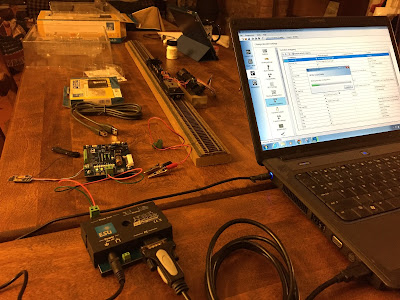 So, knowing that I had a working install, I next put a new Loksound Select decoder in my decoder tester, fired up the Lokprogrammer software, and loaded the Soo Line Mikado Full Throttle steam sound package onto it while I finished working on the engine. 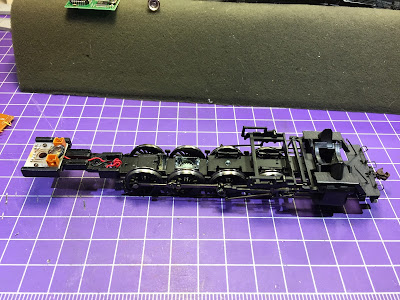 Primarily, all that entailed was cleaning out some excess grease around the bull gear on the 3rd set of drivers, making sure that the chassis/running gear would roll freely without any binding, and putting the engine itself back together (I wouldn't be able to reassemble the tender until the decoder was installed). 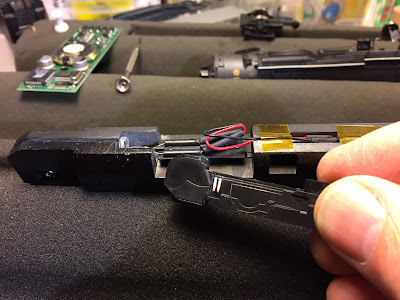 While I had everything apart though, I explored different locations for the speaker. I ended up putting it in the tender has I'd originally planned, but as you can see above, it might be possible in this engine to cut down an iPhone speaker to fit in the weight above the drivers where the lighting currently is. It'd take some fussing, but it's probably doable. I took the photo above for reference since I may try this in the future. 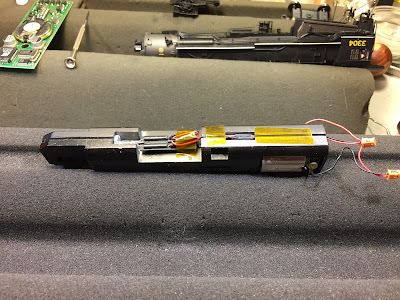 But for now, I wanted to keep things simple & clean. So I used some Kapton tape to secure the wires in the engine and reassembled it.

The Loksound decoder was all ready by this time and all I did to it programming-wise was to change the address to the engine number (3304). I figured I'd play with the unmodified file for a while before decided whether/how I wanted to program it further.

So "all" that was left to do was to install the decoder and speaker in the tender. This ended up being more difficult than I'd expected, since there's a huge mounting post right in the middle toward the front that you have to work around. 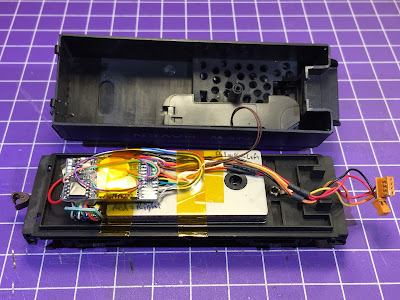 But as you can see above, I finally got a configuration that would work. The socket/plug are on the floor at the back of the tender, the decoder is on top of them, and the speaker is tucked in to the side of the mounting post, secured to the tender shell with a piece of double-sided foam tape. More Kapton tape makes everything nice and tidy.

Final Verdict
The engine sounds great, with the iPhone speaker providing plenty of volume. And of course the motor control is superb, which is typical for Loksound decoders. But I think I still have a lot of work left to do on the programming. Of course, the chuffs will have to be synchronized to the drivers, but many of the volume levels on the different sounds aren't what I'm used to hearing (having actually been lucky enough to work on a few 1:1 scale steamers). And I want to move the functions around to match the configurations I have on my other Loksound-equipped engines.

But all in all, I'm certainly on my way. And no matter what changes I have to make, using a Loksound decoder means I won't have to open this engine up again if I don't want to - I can make all the changes (and even upgrades) right on the programming track.

(Heh - I guess the only reason I'll have to get back in there is if that funky socket I rigged decides to malfunction at some point. But I'll take my chances.)

With my first "real" steam locomotive DCC install now behind me, I have to admit I'm not quite ready to tackle another one yet. I want the lessons I've learned on this to sink in a bit more. And of course I have plenty of other projects to do.

Hopefully though, sharing my experience here will give you some tips and/or insight - or at the very least, warn you about a few things NOT to do! As always, you can leave feedback in the comments - I'd especially like to hear how you would have done this differently (heh - other than "buy a ready made socket & plug!") and I'm always interested in any tips/guidance or suggestions you have.

In the meantime, here's hoping you and yours are having a wonderful holiday season!
Posted by Chris Adams at 3:30 AM