I've been a little schitzo lately, making a little progress on multiple fronts, but not making substantial progress on any one project. But to the extent that this blog is - at the very least - a record of what I'm doing on the layout, I herewith submit a few pics of what modeling I've been working on lately - centered around the Rt. 15 overpass (at the north end of the Wethersfield section, disguising the hole in the backdrop), and the B&O P-11 flatcar. 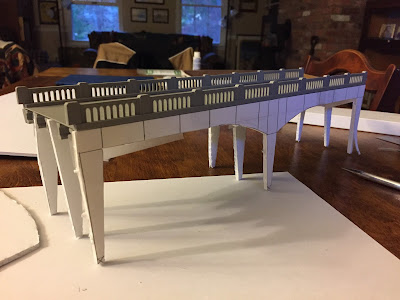 Here's my mockup of the overpass - it's a standard Rix early highway overpass, with custom girders to follow the prototype more closely (click here for pics of the prototype and the Shapeways girders developed by my friend MikeR). I plan to use the Shapeways parts in the front and as masters for the other two girders. 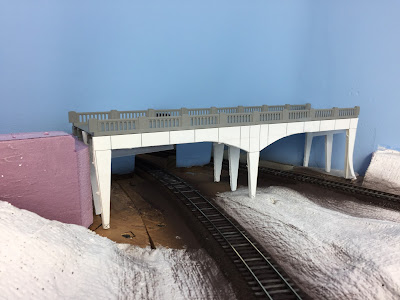 Here's the mockup in place on the layout, effectively hiding where the Valley mainline (on the left) and the Berlin Branch (on the right) enter the backdrop. 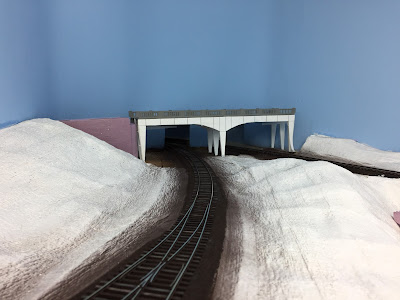 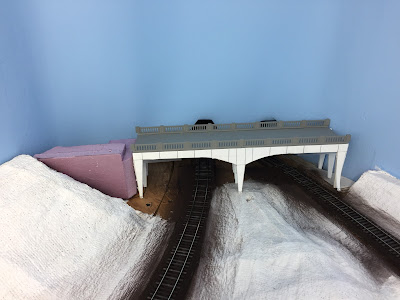 Besides the girder work, I still have a lot to do on this area to get it all to fit and look right. But I'm REALLY pleased with how it's coming out. 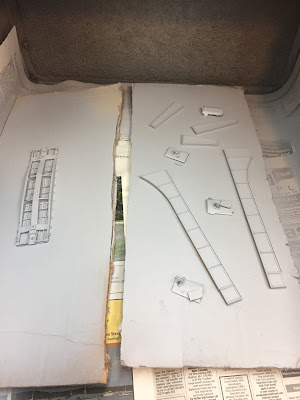 And here are the girder parts getting a primer coat in the paint shop along with the B&O flatcar. Heh - and here is where they've sat for a while, while I got distracted with other things like model photography and such.

But even incremental progress is still progress - and big goals are reached by a number of small steps. So I'll take that as some encouragement that - while I haven't accomplished or finished much lately, I'm having fun working on a variety of things at once knowing they'll get done. Eventually.
Posted by Chris Adams at 12:27 PM