Long-time readers know that the major rail-served industry at the south end of Wethersfield during the late 1940s is Valley Coal, located at Wells Road and the Silas Deane Highway. 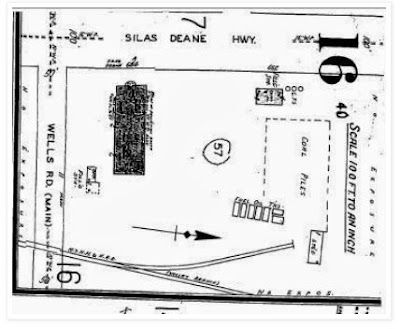 This is a view of the Sanborn map, oriented as you'll see it on the layout (the aisle would be at the bottom of the image).

And here's an admittedly poor aerial view of the prototype, shot looking east/northeast. This is a zoomed-in view of a photo taken after the 1938 hurricane. These damage photos are actually great resources in that they're often the only perspective view you ever get of a particular area. In the photo above, you can barely make out the Valley Line near the top of the pic, going from upper left corner down toward the right. The siding is located between the oil tanks and the mainline. You can also barely make out the vertical coal hoist, and assorted sheds and bins.

Like many retail home heating fuel companies during this era, Valley Coal offered both coal and oil for local customers - but as far as I know, despite eventually being 100% an oil dealer (and even selling gasoline), it was always known as "Valley Coal."

I've posted separately about the amazing model of the Valley Coal office, just outside the picture on the right, that Dave Messer built. For all my posts related to modeling Valley Coal, click here.

Well, Dave's participation in the Valley Coal project continues with the construction of the oil tanks - and I just got the completed model last Saturday. Unfortunately, despite prominent labels marked FRAGILE the USPS did it's level best to destroy it. Fortunately, they didn't succeed - but there was still a little work to do. 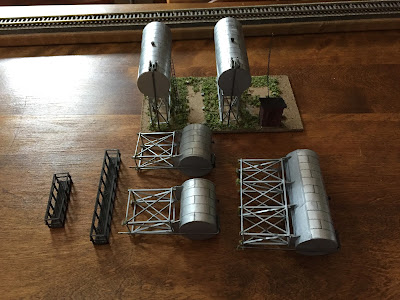 Once I unpacked the box, the above is what I had to work with. I later found a few more details (I'm glad I saved the box!). So it was like receiving a really amazing kit - that was already 98% finished!

All I had to do was confirm with Dave where everything was supposed to go, then I used my new favorite glue (Aleene's Fast Grab Tacky Glue), applied with a toothpick, to attach all the pieces. It took a couple of consecutive evenings since I couldn't glue everything back together at the same time - I had to go in substeps, letting some things cure before being able to attach additional things to it (e.g. installing a tank before attaching the platform).

But I really enjoyed being able to "participate" in the construction, even if only incidentally and in a very minor way. The best part was being able to appreciate all the fine detail Dave included in this scratchbuilt industry.

Yesterday's Wordless Wednesday showed some of that process and what was necessary to weigh down some of the parts while they dried. But after all that, here's the finished product: 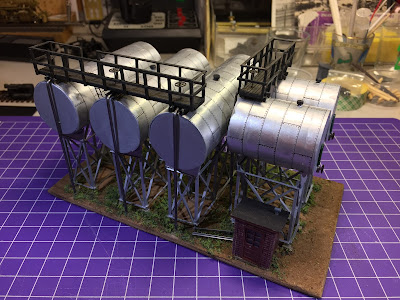 Looks amazing and another example of Dave's craftsmanship. Sharp eyes will note that the "tank farm" is selectively compressed - 3x2 tanks rather than 5x2 - but I bet if I hadn't pointed that out you wouldn't have noticed. Bottom line is that it's going to be perfect in the Valley Coal scene I'm building.

One last thing I decided to go ahead and add was hoses to the ends of the pipes. I'd been using 3/64" heat shrink tubing during my recent decoder installs, so I got the idea to use those to represent hoses. 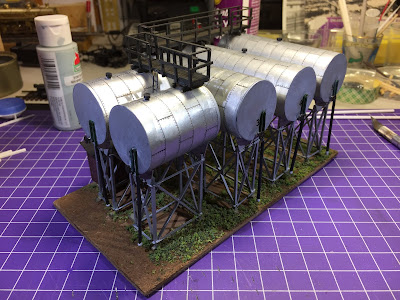 Fun Fact: 3/64" tubing slips nicely over the end of the wire that Dave used to represent the pipes. I only needed a daub of tacky glue to make sure they wouldn't slip off. 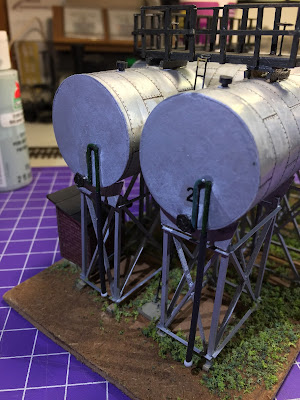 But first, I dipped the ends into some silver/gray paint to represent nozzles at the end of the hoses. Turns out that the hoses will mostly be on the back side - facing the backdrop and away from the aisle - so I didn't have to worry too much about superdetailing the hoses. Just having them at all will do the trick I think. 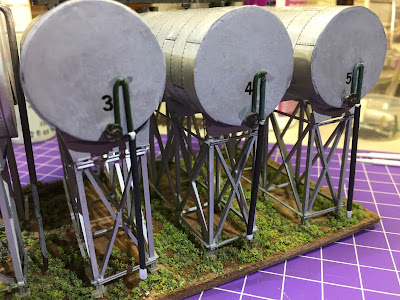 And here it is placed temporarily on the layout: 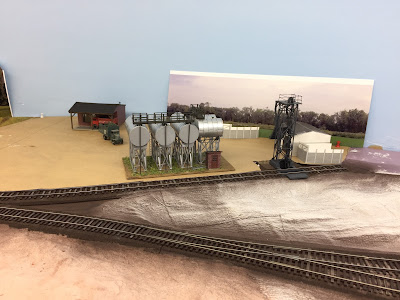 Compare to the prototype map and photo and I think you'll agree that Dave nailed it! Can't wait to get this scene finished and continue progress north into Wethersfield proper. Hope you'll continue coming along for the ride!
Posted by Chris Adams at 7:39 PM