With the "pre-ops ops session" (aka "getting things ready") all done, I had only a few last-minute things to get done before the guys showed up (bring laptop downstairs and get WiFi throttle running, change some batteries in throttles, power up the railroad, stock "O'Rourke's Diner"). Randy showed up first to help out, but with everything done we were able to spend a bit of time flipping through my latest acquisition (which will be the subject of a future post).

This rare Sunday session was set up especially for guys who live too far away to make it to our monthly Thursday sessions and I was frankly a little humbled by the fact we had guys come from as far away as northern New Jersey and southern New Hampshire - a 5 hour spread(!). Fortunately, Saybrook is pretty centrally located. If you don't count the ocean.

For this session, we had a few regulars (Randy, Tom, Pete), one sophomore (Mike), and four guys operating on the Valley Line for the first time (Dave, JimL, and JimF). We were a little short on crewmembers, so PDX-1 went to Mike who gamely agreed to take the shortest train by himself, and we didn't run any actual mainline trains until that same Mike finished PDX-1 and wanted something else to do. When we do have full crews, the mainline through Saybrook is actually going to be a little stressful with all the trains and both Shoreline locals trying to work and stay out of the way. But it'll provide a really interesting contrast to being out on the branch lines.

For today though, the four locals would be plenty. I'll let the pictures help tell the story...

All in all, the session went really well - even better than last time.
These are the typical ups and downs of a typical session, but one new thing I tried this session - or at least formalized - worked especially well:

I created a train register which I used to record all the trains, where they were at what times (both fast time and actual time), and the number of cars they had at each point along the way. I developed it to get a clearer picture of how long (time) each of the trains take - and how long (cars) each of the trains is at different points in the session. An unanticipated benefit is that it also tells me where everybody is at all times - very useful for my dispatcher role (though, admittedly, this isn't as critical on the branchlines).

As you can see (or can if you click on the image above), three of the four locals finished all their work within 30 (real) minutes of each other: PDX-2 took 2hrs 10mins, HDX-12 took 2:35, and HDX-7 took 2:40 (but The Valley Local - as this blog's namesake - should take the longest!). Poor Mike was done after just 40 minutes, but he actually got to run more trains than anybody else. And we moved (picked up or delivered) over 90 cars over the course of about 2hrs 45mins (11hrs fast time). 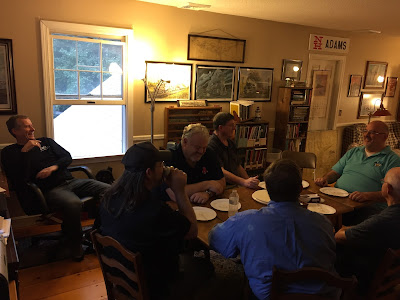 All that work certainly earned the guys a treat, and - unlike past sessions when we'd do the debrief in the basement - we adjourned to the upstairs den (aka the train room, now the crew lounge) for cake made by the Missus, to go over the session a bit, and generally have a good time visiting. As awesome as it is to see the layout come to life, the best part of operating sessions is having a chance to get together with friends and enjoy each other's company. Many thanks to the guys who came from near and far for a great afternoon on the Valley Line.
Posted by Chris Adams at 7:06 PM