Yesterday was September 22nd, but it wasn't Thursday and we weren't in my basement. It was Wednesday, September 22, 1948 and we were operating trains in the Lower Connecticut River Valley.

Pursuant to the railroad's Crew Call earlier this week, we had Bill, Bob, Tom, John, and Pieter, as well as greenhorns new guys "Mike" (two MikeRs) running the four locals, and me running the tower and being agent. I even tried to operate a few actual mainline trains, but that's another story. 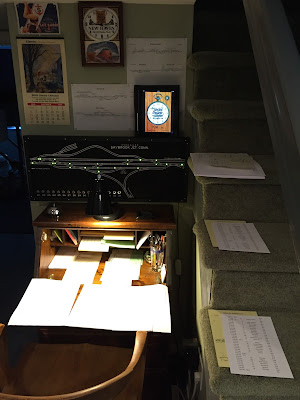 A shot that's familiar to long-time readers, this is typically the first view of session setup - but this time "something new has been added." In addition to the Saybrook Tower control board, fast clock, and the usual paperwork on the desk, this session had a few innovations which I'll introduce below but will be the subject of more-detailed posts in the coming days. 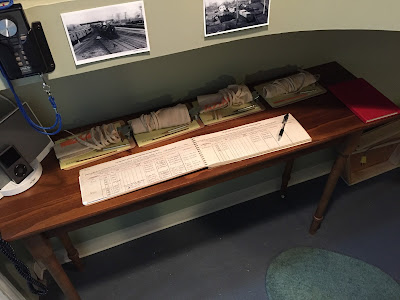 Here's the crew sign-in: Not much new here - we have the register itself along with supplies for each crew (apron, uncoupling tool, pencil, and clipboard with a "memo" sheet for noting problems/suggestions). What's new is the iPod/Bose speakers which provide period background music. 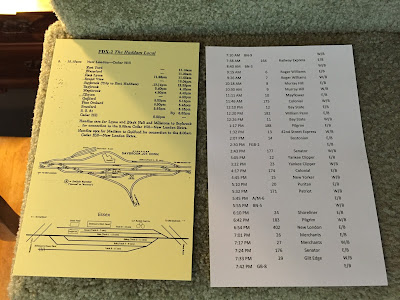 First "innovation" is actually an adaptation of "job cards" - an idea which I got from Mike Confalone's Allagash railroad. Mike's cards are small, brief descriptions of the work the train does but I added the train's schedule on the front, copied from prototype paperwork, as well as miniature track diagrams of the towns along the route. On the back are "Conductor's Notes" which describe the work to be done, as well as some tips on how to do it.

The card on the right is a listing of all the mainline trains that go through Saybrook during a session - 33 of them(!) One of these cards is provided to each of the crews, but only the Shore Line locals (PDX-1 & 2) need to refer to them to know when they have to be clear of the mainline. One of these days, I hope to steal another idea - this time from my friend Trevor - and develop an actual employee timetable for my crews. But this and my Bulletin Order will suffice for now. 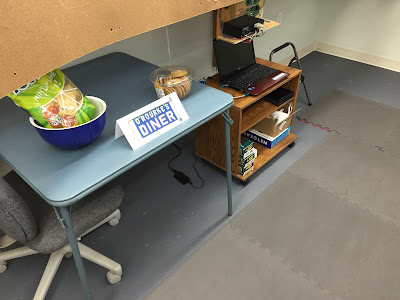 One of my crew members noted that last session I didn't have any snacks, so this time I made sure O'Rourke's Diner was open and well-stocked in Middletown. True-to-prototype, O'Rourke's is where the crews from the Air Line and Valley locals would "go for beans" while waiting for their tenders to fill. Fortunately enough, my crews tend to get to Middletown about the same time too - and the aisle space here is the widest on the railroad, which allows such a congregation.

Additional innovations introduced this session are the laptop running the WiFi throttle server and the foam squares (which I've used before, but not in a long time). 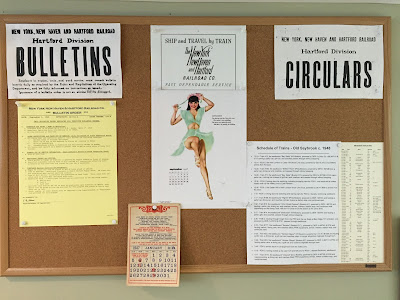 Each session has a new Bulletin Order and a calendar for the month/day we're running. Thankfully, is this Internet Age, such old calendars are fairly easy to find - well, at least images of old calendars are easy to copy and print. This one is from September 1948. You can juuuuusssttt make it out there above the authentic 1947 calendar I just got on eBay a few days ago. If you still don't see it - it's to the left of the gams. Funny - almost all of the late '40s calendars I find are pin-up calendars. Not that I'm complaining... 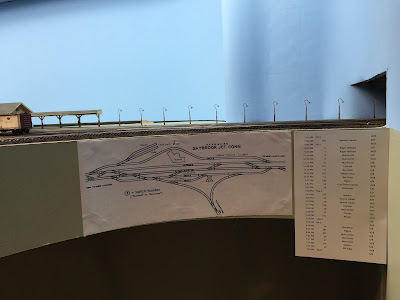 Also, this session I finally got around to adding track/siding diagrams on the fascia at the new towns of Saybrook, Essex, Deep River, and East Haddam. In Saybrook this is especially helpful since it shows - albeit in a font which is probably too small - all the switch numbers, which the crews call out to the tower operator so they can be thrown ("normaled" or reversed). Also in Saybrook, I've placed a list of the trains scheduled to come through and their times - critical for knowing when to be out of the way. 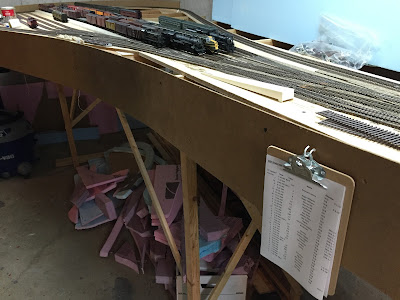 That same schedule is clipped to a new clipboard in New London/Boston staging so a mainline operator knows what trains need to be run and when. You can see the new board here as well as the mainline trains staged to be run. Yes, with 33 trains to run in both directions, some of these trains will be used more than once. 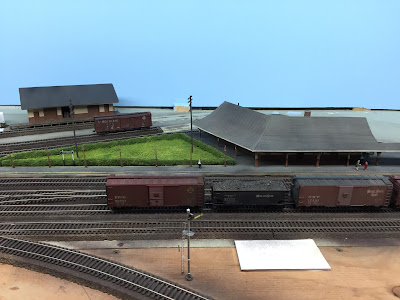 Finally, this session introduced two new structures in Old Saybrook, courtesy BillS. The Saybrook station has been a collaboration for a number of weeks now (and by "collaboration" I mean I did the measuring and materials purchase and Bill did the actual building %^) and I've enjoyed seeing it gradually taking shape, literally and figuratively. It got "planted" last weekend - including scenery - and we (he) even painted the track to get rid of that annoying plastic sheen. 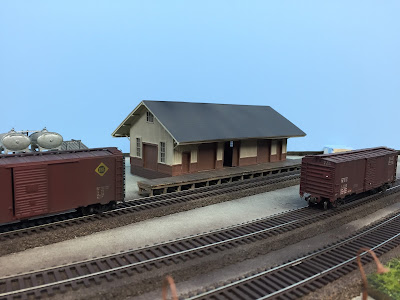 What I didn't expect - and which arrived just yesterday - was a fully complete Saybrook Freight House. Last I heard, he was "looking forward to doing the freight house now that the station was done" and asked me a couple of questions about window/door placement. But that was last Sunday, IIRC. No progress pics, no other peeps about it. Then, last night, he starts placing peeps people on the station platform and I ooh and ahh all over them - totally missing the fact that he'd taken away the paper mockup of the freight house and replaced it with the actual model(!!) Yeah, I need my eyes checked. As you can see, I eventually saw it. 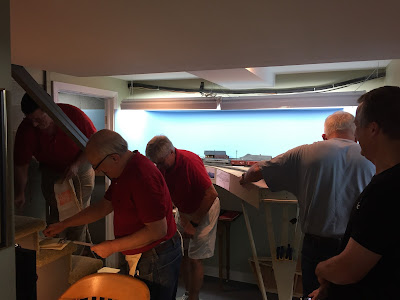 With everything all set up and ready to go, I had the crews sign in and get their paperwork. It gets a little crowded/hectic at this point, with everybody trying to collect what they need to get going, so I'm trying to come up with a better process for starting. Actually, following the prototype even more closely could help. Unlike my sessions, the prototype locals started at different times and though I have a 4:1 fast clock, I wouldn't want folks to be hanging around too long before they can move their train. 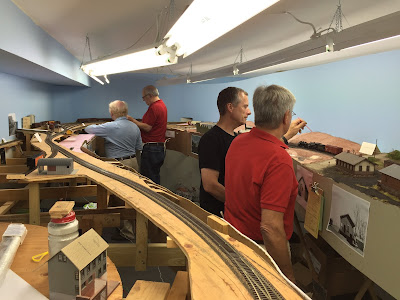 As the session progresses though, the guys - and their trians - do get a little closer. Here's the Air Line local on the left in Middletown & Valley Local on the right in Rocky Hill. 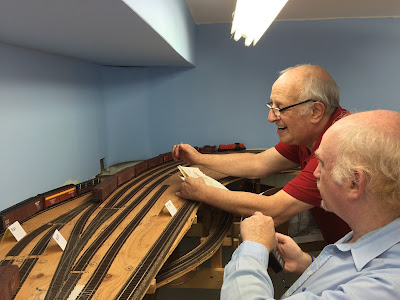 Pieter running the loco on the Air Line local in Middletown and MikeR as conductor/brakeman. Mike developed the spreadsheet that I use to generate my car movements. From the "small world" department: I discovered that spreadsheet on the Model Railroad Hobbyist website and have been using it for a number of months now. Mike contacted me a few weeks ago and - much to my surprise - I discovered he lives just up the river from me(!). 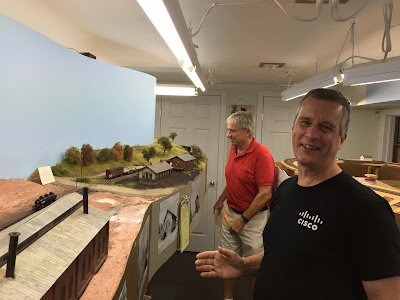 The "other" MikeR doesn't live nearly as close, having traveled over 90 minutes to attend. But it looks like he's having a good time - probably just happy I finally told him about the F7 brake on the K-1 (he'd been having a devil of a time with the momentum set sooooo high). JohnG's in the background, smiling despite the fact that Rocky Hill doesn't have nearly enough space for all the cars he needs to deliver there. 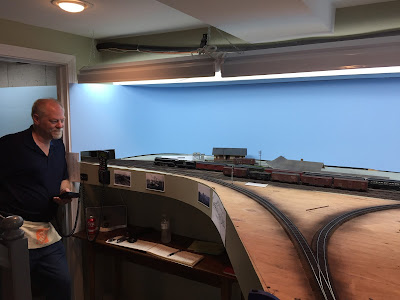 BobV and Bill were crew on the shortest of the locals - PDX-1 only works Saybrook before it terminates, so at most they've got about a real hour's worth of work (4 hrs on the fast clock). One thing we tried this time though was running mainline trains - I figured the PDX-1 crew could do that once their main work was done. It looks like Bill's enjoying watching the varnish high-step past the beautiful Saybrook station. 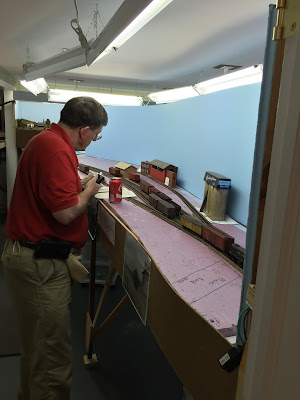 Tom was flying solo on PDX-2, but I caught him here switching Essex. One of the things "Spreadsheet Mike" is helping me with is how to modify the car generation so that the trains don't have quite as many cars. My locals are typically anywhere from 12-18 cars long(!) - that's not a bad sized mainline train on many HO layouts, but on a local - on a railroad that has fairly short passing sidings - it makes operating a little too challenging sometimes. I don't hear many complaints though - unless a crew has put even more cars in their train unnecessarily...

Speaking of which, a few lessons from this session:
All in all though, the session went very well - any derailments or other major issues were the result of human error (mostly mine) rather than any problem with the trackwork (wiffy throttle being the exception - and which will be addressed). I'm sure during my additional post-session debrief I'll come up with a few more improvements, but for now I'm pretty happy with how things are running.

Until next time, all is (finally) quiet in Old Saybrook . . .