(We interrupt our regularly-scheduled blog with our Very First Guest Post, penned by my SO, aka "the Missus." If you, too, are lucky enough to have such a person in your life, show them this post. They may find some of what follows awfully wonderfully familiar. Enjoy!)

I knew from the time the Mister and I began dating that the Mister loved trains. The fact that on our third date he told me over dinner that we were close to the train yard where he worked as a high school student, and asked excitedly if I wanted to see the boxcar, um, "Pullman Troop Sleeper," that he lived in, gave me my first clue that I was not dealing with a sports-obsessed, video game-loving sort of man. The fact that I – still not knowing him very well and agreeing to go to said train yard in complete darkness in a rural area with one state trooper before the days of cell phones without having had one sip of wine – was excited to share this meaningful piece of his past with him gives you another clue: that his passion for trains was so sincere that I, who am normally so paranoid careful, didn’t stop to think about the craziness of this expedition until after the fact. (I didn’t tell my parents this little story until years later.)

I guess my enthusiasm for abandoned rail yards passed muster, because three years later the Mister proposed to me on the Cape Cod dinner train. It was a total surprise – I wasn’t suspicious in the least when he asked me to walk back with him to check out the empty, antique dining car. On our honeymoon, we took a train trip down to Savannah and Charleston. Although Amtrak doesn’t exactly evoke the luxury of train travel in Cary Grant’s North by Northwest, we enjoyed watching the landscape pass by in a way a plane just doesn’t permit. So when we returned home to our apartment, and he asked if I minded a small, 4’ x 6’ layout at the top of the stair landing, why would I say no?

And why would I say no when, upon moving into our first house, he wanted to finish the unfinished basement for a train room? I had no plans for it, and as his collection of books and models grew, it was easier to keep them there, all in one place, than divided among the upstairs rooms. I gladly accompanied him on road trips to photograph factories for the proposed Naugatuck Line, and then the Berkshire Line--which is quite lovely in autumn--when he was researching his first few layout concepts.


But, alas, after many, many versions of track plans and Building Benchwork II, we had decided once again that we needed to move. Our former city was too congested, and our neighbor’s new addition seemed to disturb the water table which was causing flooding every time we had a heavy rain. While the Mister worked his late hours in spring, I traveled with our real estate agent to our new dream town, forty miles away, and fell in love with our current house: fireplace, attached two-car garage, big yard, no major renovations needed. I knew that the first thing the Mister would counter-argue was, “it’s too big.” Compared to our tiny 1927 house, this house had so many extra (to us) spaces that upon seeing the bonus room for the first time, I thought to myself, I don’t even know what we would do with all this space! And then I got a Wonderful, Brilliant Idea. The bonus room could be The Train Room. No need to put the books and the models and the photo library in the basement! Two floors up and it could rain all it wanted! While it still took a tiny bit of convincing, papers were signed and boxes were packed and a really heavy train layout full of Vermont stones (literally) were loaded into the U-Hauls (thanks Tom!) and off we went. The Mister now LOVES his aerie/clubhouse, and sometimes even I and the cats are allowed in.

As a train wife, I am thrilled that the Mister has a hobby that engages his mind and fine motor skills, gives him a break from his work, and has allowed him to meet and become friends with so many kind, funny, and generous people. They are like family (we see them more often than our actual families!) and in a world where, despite social media, rates of loneliness are soaring, we feel so blessed to know each of them. What woman wouldn’t want that for her Mister?

So, what if your Significant Other has recently shown an interest in trains, or you have met a new man who offers to take you to a deserted rail yard on your third date? What if, before you can pronounce "ferroequinologist" much less spell it, the model railroad magazines begin to take over your coffee table? What if you have no clue who Tom Brady is, but are starting to really get Lionel Strang’s inside jokes? And what if you know you’re at the point of no return when you are grocery shopping and an engine for Shoreline East goes by behind the store, and you think, that’s a GP-40 (true story)! How do you adjust to this new lifestyle?

Here are a few tips that may help:

1.       Set Boundaries: Give your SO a dedicated spot for his new hobby. The Mister has the basement and train room to do what he likes. That means no train stuff in the other, shared rooms of the house. It also means I have no input when he 1) rehangs doors or removes them entirely 2) punches through the walls to connect the track through the rooms or 3) blocks the fuse box with a liftout. (The pink foam board blocking the basement window is still a point of contention.) 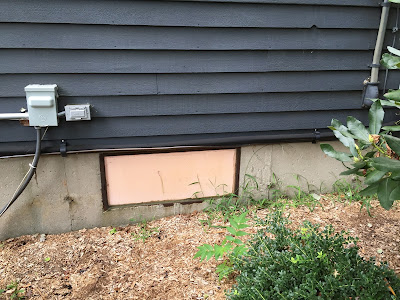 2.       Be Prepared: You never know when, on a visit to a relative’s house or a weekend road trip, you will stumble across abandoned track, bridge abutments, dilapidated factories or mills, or cabooses in the woods that Must.Be.Documented.For.Historical.Record. Bring a book, a podcast, your knitting, or a crossword puzzle, because this could take a while. If it’s time for an Op session, plan a Girls’ Night Out with your friends. Reunion Weekend? Time to do a big house project you can’t get to, or visit family and friends out of state.
3.       Per #2, make him drive his own vehicle.
4.       Hide Your Good Tupperware and Kitchen Gadgets. Apparently they are good for mixing Ground Goop and other non-edibles.
5.       But also designate limits on storage of recycled containers: 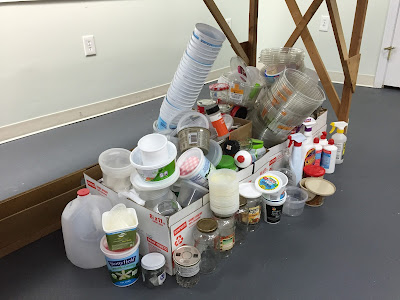 Above all else, I will leave you with advice from my grandmother, who, when asked, never minded my grandfather’s bowling nights: “It keeps them out of the bars!” Indeed.

(When she's not guest blogging here, the Missus maintains her own website at http://www.shorelinewriting.com Now excuse me while I go hide dispose of some recyclables)
Posted by Chris Adams at 12:30 AM