Since I've been focused so much lately (like the last 14 months or so) on layout construction/expansion, I haven't spent much time at the workbench. That's changed over the last couple of evenings.

So, this latest edition of WOMW, shows my handy-dandy NCE wireless throttle antenna elimination modification - this time being attempted performed on an NCE CAB-04pr throttle. 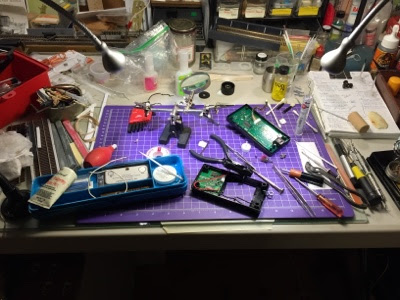 Despite the fact that the Cab04 is a much less expensive throttle than the ProCab, this mod is actually proving to be much more cold-sweat-inducing. Everything is Just So Cramped. Thankfully, I just tested it and it works(!). I just need to add the battery pack cut-out switch and this project should be done. I'll decide later whether to do the same surgery on my other Cab04 (it's currently at NCE for "other issues").

When I'm finished, I'll do a more detailed post. For now though, a quick tip: use 20 gauge rather than 18 gauge wire in this one.
Posted by Chris Adams at 3:30 AM