Converting Can Lights to Layout Lighting, Pt. 3 - Installing the Lights

Lots happenin' on the Valley Line, despite it being my busiest time of year at work. Whatever extra time I get I've been workin' on the railroad, so not much time left to blog. But I continue to make regular - and pretty significant - progress. I'm at the point now where I just want all the construction to be DONE so I can focus on things other than benchwork, trackwork, lighting, and wiring (not to mention tape, topping, and painting). For some reason, for example, I've been bit once again by the DCC bug and have been gettin' all crazy with decoder settings. I especially like how my K-1 will coast on momentum forEVer and I have to use F7 to brake. But that's another story....

For now, it's back to lighting. Once all the cans were converted to outlets, it was finally time to put up the lights. But I had to get them first. This is where having a smaller layout would have been nice - on a large layout, EVERYthing is bigger. Including your light order: 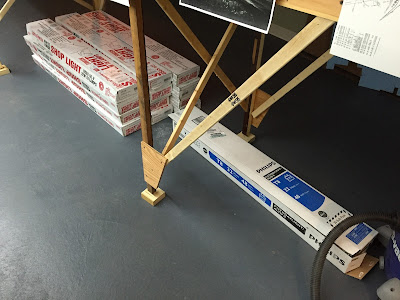 I ordered fifteen shop lights and a case of 30 T-8 bulbs from Wal-Mart. Given the quantity I needed, I went the least expensive route I could find - the "Lights of America" fixtures are under $11 each and I've been using them in the other room for over 3 years now with no problems.

To attach them to the drywall ceiling, I used the drywall anchors and screw hooks I described here. I placed the first fixture at the end and at the front edge of the layout and marked on the ceiling where the hanging chains would go. In order to limit the number of anchors/hooks I'd have to install - and because I wanted the fixtures to go end-to-end with no gaps - I decided to have one hook hold the ends of two fixtures.

Here's a close-up of the anchor/hook assembly. The best part of this setup is that you can hang the lights from the ceiling at whatever location you want. 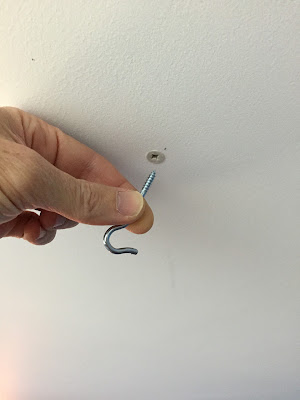 I installed the first lights above one of the modules. Due to the "proscenium" there's a natural valence already in place. I mounted the fixtures close enough to this "valence" so that they'd tilt toward the layout. 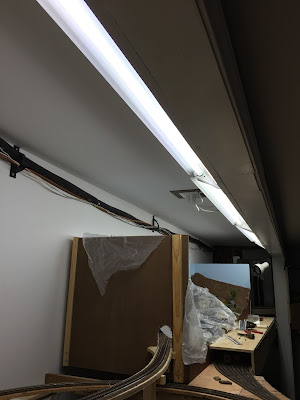 I'll try to reproduce this effect over the rest of the layout. 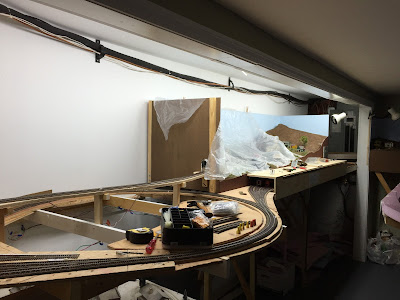 As you can see, the effect is pretty cool - you don't see the lights, just the lighting.

Here's a shot with the rest of the lights on (having been installed): 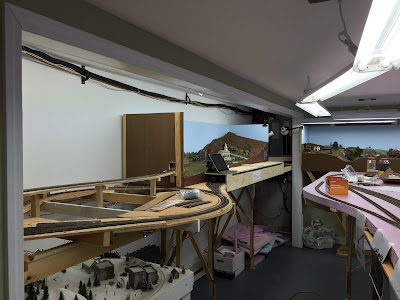 And some over-all shots, showing how extensively and evenly everything is lit up. 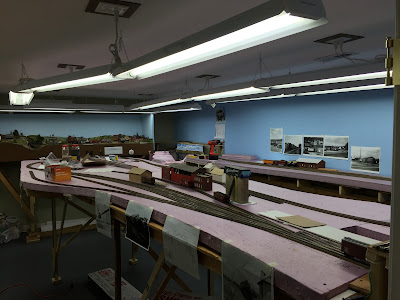 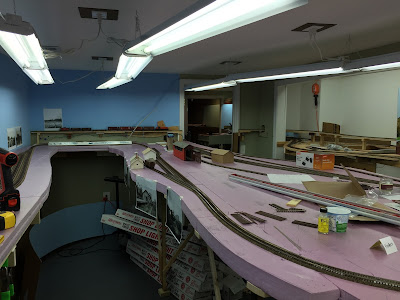 I haven't yet tilted the lights toward the layout - that'll make a big difference in eye-glare. And eventually, I'll install valence to hide the lights even more.

Pretty dramatic difference from this: 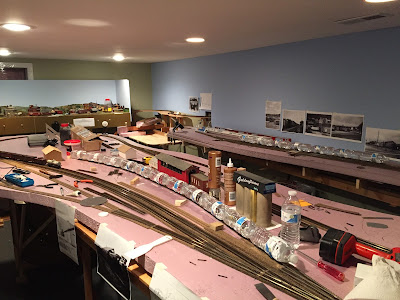 Now that all the lights are up, the next hard task will be getting rid of all the empty boxes . . . 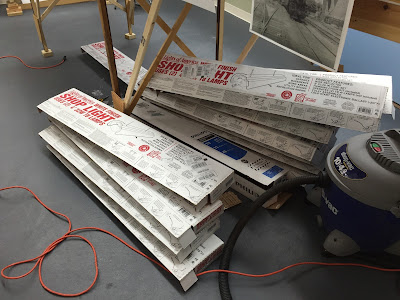 Not something the owners of smaller layouts have to worry to much about!
Posted by Chris Adams at 4:45 AM