Converting Can Lights to Layout Lighting, Pt. 2 - Can to Outlet Conversion

Once the outlets are all prepped, it's time to do the actual can conversion. I knew drilling holes into the drywall ceiling would make a little bit of a mess, so I covered the scenicked portion of the layout with some really light weight dropcloth/plastic material: 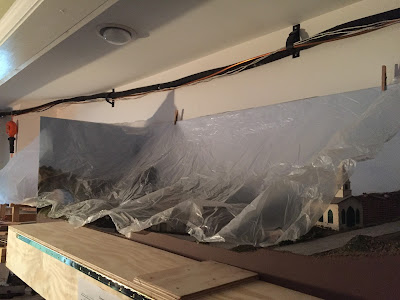 Once I did that, the first step in the conversion is, of course, to unscrew the bulb. And you're left with this: 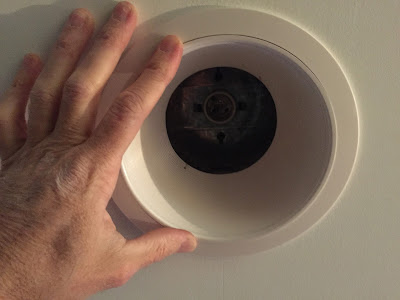 Next, locate the spring clips that hold the flange/pot to the can and unhook those. It should be pretty clear where they are, but if you pull the flange away from the ceiling, it'll be obvious. Once unhooked, the flange/pot assembly comes right down revealing the can & light fixture. 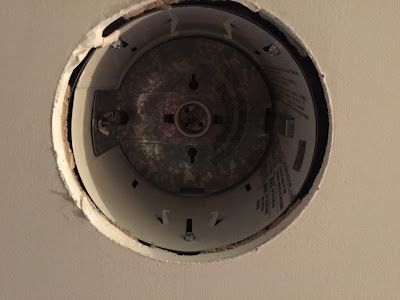 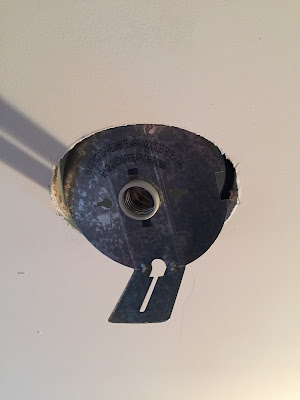 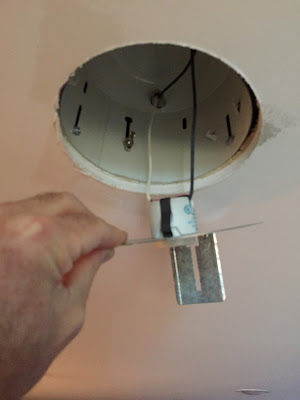 (NOW - if you have not yet turned off the power to these lights, DO SO NOW! To be extra safe, I shut off the breaker and just used a floodlight plugged into another circuit with an extension cord for lighting while I did the rest of the job.)

Once you have the assembly out, it's time to cut it from the wires. Early on, I thought I'd want to convert back to can lighting (e.g. in case we wanted to sell the house) and so I cut the wires leaving pigtails on the socket for reattachment later. That made it more difficult to connect the outlets and I later decided if I ever wanted to put "more traditional" lighting back in, I'd do track lighting instead - and use my new power outlets for that. Once that was decided, I just started cutting the wires right next to the socket and just discarded the socket assembly entirely (along with the flange/pot). Having longer wires made it MUCH easier to wire up the outlets later.

So this is what you're left with: 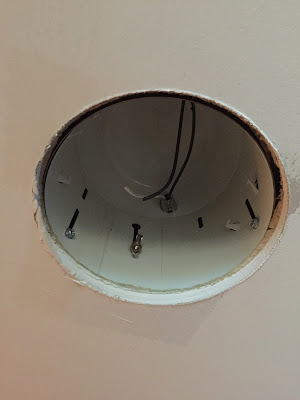 Next, it was time to mark where the cover plate would go. To make sure the plate would be parallel to the wall (not askew on the ceiling), I used a long T-square and made a small straight pencil mark to give me a guide for placing the plate. 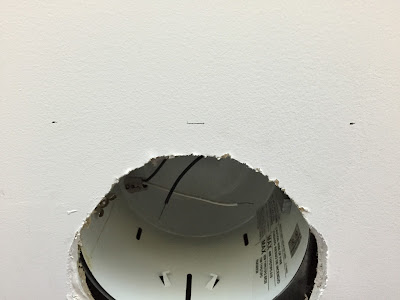 Then, holding the plate in place, I drilled four pilot holes in the corners (1/4"), set the plate aside, and inserted the drywall anchors: 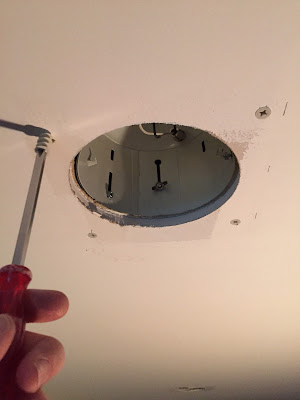 Pete had wired the outlets and left pigtails to connect to the wires coming out of the cans, so it was just a matter of wire-nutting everything together - black to black, white to white, green to ground (in my case, I attached the ground wire to a screw on the side of the can. Oh, and btw, pay no attention to the actual color of my wires). 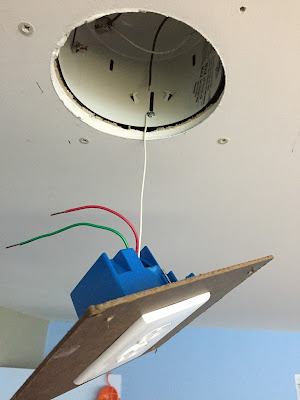 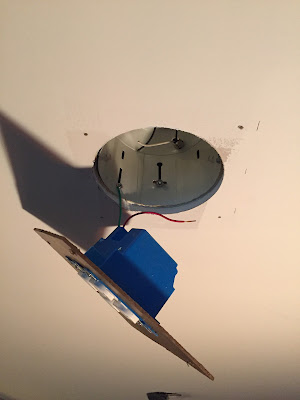 Once everything is all connected, turn your breaker back on, plug in a trouble light or something, and then flip your (former light) switch on the wall. If you did something wrong, the breaker will trip and nothing will happen (ask me how I know). If you did everything right, your trouble/test light will come on. Success! 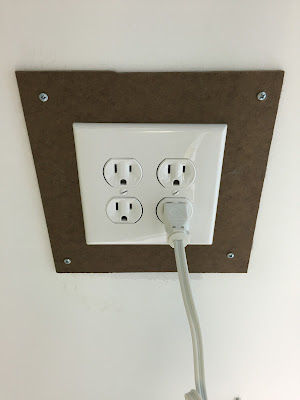 I did each outlet assembly one at a time and tested each before moving on to the next. That way I'd be able to fix any problems as soon as they cropped up. After my initial snafu (I had a crossed wire on the first outlet), everything worked wonderfully. And it looks pretty good too (I'll eventually paint the masonite to match the ceiling).

Next time: the fun part - installing all the lights!
Posted by Chris Adams at 3:30 AM