The Drop Down (finally) Drops

As I mentioned, getting the drop down to actually drop down was next on my list of things to do.

Thankfully, I'd already done the prep work (click here for how I built it). The roadbed had been glued across the joint and cut along the joint the next day (after the glue had thoroughly set). Next I nailed three track nails on each side of the cut/joint and then added beads of Aileen's Tacky Glue to really weld everything in place. 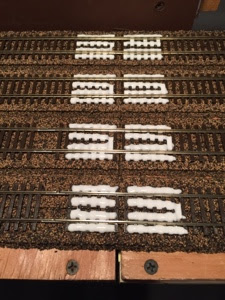 Since those were such thick beads of glue, they took a couple days to dry thoroughly. Next I just had to cut the rails with a cut-off disk in my Dremel. But then the snow hit and the power went out. So after our power came back on and I got all the snow shoveled, I got right to it. Took me about 15 minutes, mostly because I was using a VERY low torque cordless Dremel Mity Mite. I kept having to back it off and take another teensy bite, trying to be careful not to move the disk fore/aft too much and thereby widen the gap in the rail too much.

But since the only thing holding the drop down up were the rails (and, of course, the hook & eye), once the rails were cut (as well as the plastic webs underneath the rails - check with an Xacto), it worked just as I'd planned.

At about this time, I got called to dinner. We listened to Casey, Crime Photographer while we ate our pizza . . . 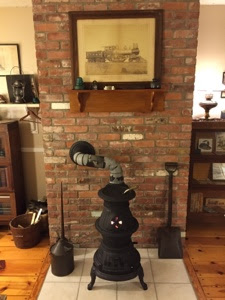 . . .then retired to the den to do some modeling while warmed by our little RR shanty stove. Despite the power outage (and my aching back from shoveling concrete wet snow), it's turning out to be a pretty great weekend.
Posted by Chris Adams at 6:02 PM