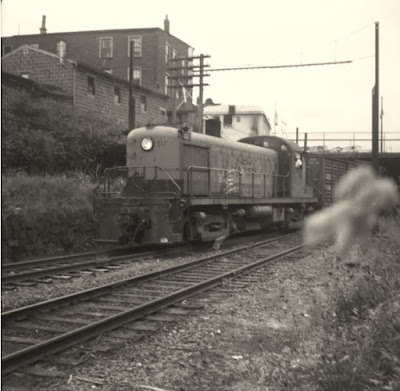 We have here the Airline Local passing eastbound under Main Street, Middletown, CT. You can just make out the back side of O'Rourke's diner (favorite lunchtime stop for Valley and Airline crews) which had "just" been built in 1941.

The local has at least one (or is it two?) stock cars in tow, and it's heading down the southwest quadrant track most likely on its way to the Middletown Meat Packing Co. about a mile or so south of town. Meat "on the hoof" is something that was fairly common on the Airline and Valley Lines, due to the big packing plant here. And I even heard somewhere that Middlefield, CT (about a dozen or so miles west of here on the Airline) had one of the biggest cattle auction venues in the region at one time. But stock cars on the New Haven were pretty rare, generally.

The Airline Local is still a 6-day-a-week job these days, and depending on which day this is, it'll be headed for East Berlin, Colchester, or even Chestnut Hill (outside of Willimantic) after it gets done with its work in Middletown.

While I won't be going this late on my railroad (despite accusations - and admissions - of Era Creep), it's always neat to see an Alco on the lines I'm modeling. Having a rare stock car in tow (not to mention an old-time view of my favorite restaurant) is just a bonus.
Posted by Chris Adams at 12:30 AM