It's no secret to prototype modelers that the historical society for their chosen railroad can be a priceless resource of information. For the New York New Haven & Hartford Railroad, that society is the NHRHTA. Many of the photos you see here come from the collections of NHRHTA members and from the Association itself. Additional information can usually be found in its flagship publication, The Shoreliner and you can even download their modeling magazine, The Speedwitch. If all else fails, you can often get quick responses to your questions by posting to their discussion forum.

So it's no surprise that I got onto the Forum to see what I could learn about NHRR structure colors  - and hopefully find out what color the Saybrook tower was painted circa 1947.  In perusing old posts, I discovered two threads dealing with NHRR structure colors, one from just earlier this year and one from 2013.

Both of those threads have some great info (and great photos, both prototype and model), but one of the most helpful was this post from NHRHTA member (and fellow New Haven modeler) BillC who roughly outlined the timeline for NHRR structure colors:


"In the early 1900's the scheme was tri-color which I believe was chocolate brown trim, tan wainscoating and window sashes and cream siding above the wainscoating.  This changed somewhere between the onset of the Depression and the end of WWII to a bi-color scheme of tan trim and wainscoating and cream siding and window sashes like the Danbury freight house and the Cornwall Bridge station.  By the late forties this became overall tan with white window sashes and undersides of overhanging roofs for passenger stations (Canaan, CT) and just tan for everything else."

While I haven't been able to find too many photos of the Saybrook tower (especially in color, from my era), there are quite a few of the station. So maybe we can narrow things down a bit. Confirming what Bill said (not that his statement needed any confirmation), here's a photo of the station in the two-tone scheme from 1937: 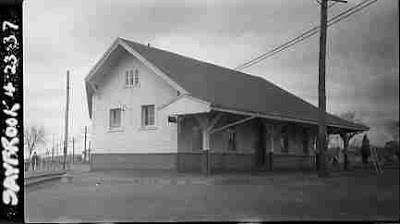 Too early for me, but how about this from our own John Wallace: 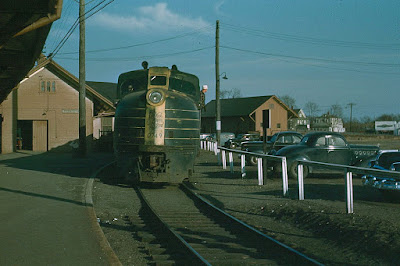 Closer to my era, being from spring 1949 according to John (and click here for a cool analysis of the cars in the photos - reply #5). The station - and the freight house - are all brown. Not too exciting. (and what's up with the lighter color under the station's roof overhang??? Any thoughts what that might be?)

Here's another photo from earlier, (I-5 instead of DER-1, '40s autos, can you tell the years?) - but not by much - shows the station still in two-tone: 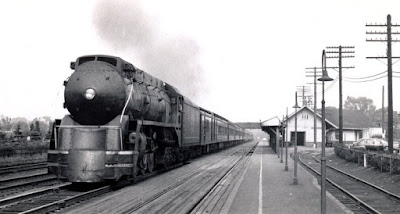 So it appears the station at least - and consistent with what Bill said - was repainted from two-tone to plain brown sometime before 1949. Since I model October, 1947 (with an occasional foray into 1949), it'll be interesting to figure whether I stick with boring all-brown, or if I swap out different colors of stations depending on the ops session . . .

So, what about the tower? Despite it's being in black & white, I can only imagine that this is the tower in the all brown scheme: 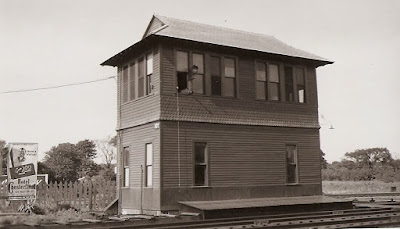 Anybody have any idea of the time period of this photo?  My guess, based on the billboard and the scalloped siding on the 2nd floor, would be sometime in the 1930s. What do you think?

And finally - perhaps paydirt?! The color here is a bit washed out, but it looks to me like the tower here is also all brown (I'm not being sarcastic - I'm actually a little colorblind so appreciate any help!): 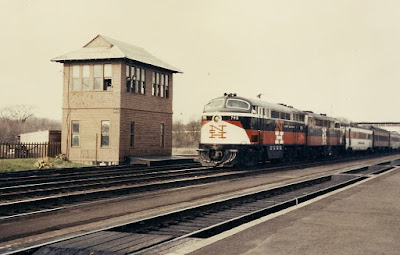 So, go safe with doing all the Saybrook railroad buildings in the all brown scheme, or use a little modeler's license and speculate that the station and freighthouse at least were still two tone in 1947?

As Bill said, "do you want to go with era specific paint which may be double plus un-fancy or do you want to go with a flashier paint job which may be a bit anachronistic?" Unless I can get some more information, it looks like I may have a tough decision to make. But it won't be the first time a prototype modeler had to choose between 100% accuracy and something more aesthetically pleasing.
Posted by Chris Adams at 12:30 AM