While researching NHRR structure paint schemes is fun, sometimes the work is done for you. In the case of the Old Saybrook Tower kit, you're told right in the instructions what to paint it:


"The older paint scheme of the tower was a tan with brown trim . . . [t]his color was confirmed during a visit to the tower . . . [p]eeking inside, we found the inside of the stairway to be painted with the tan color."

They suggested using a 60:40 mix of Floquil Flesh and Foundation for the tan color ("cut with just a little bit of white") and Floquil Rail Brown for the brown trim color (lightened with a little white). Since I'm not sure how that will actually look compared to the color photos I've discovered (and also because I haven't yet found a bottle of Floquil Flesh), I'm going to wait until I can make a color swatch as a test before painting the model.

Alternatively, I could follow what BillC used for his model of the Canaan, CT station - PollyScale Rust. He used that for the walls & trim, painting the window sashes white.

But what about the most popular NHRR structure paint combo - the two-tone color scheme which was in use "from sometime between the onset of the Depression and the end of WWII?" Even in my late '40s era, some buildings were still in this paint (e.g. Wethersfield, Essex, and Deep River stations) and this scheme was replicated very nicely by JoeS on his model of Cornwall Bridge station. See below:

On the other hand, our good friend, the late John Pryke used Floquil Depot Buff and Roof Brown to achieve a similar effect, according to an article in the November 2009 issue of Model Railroader: 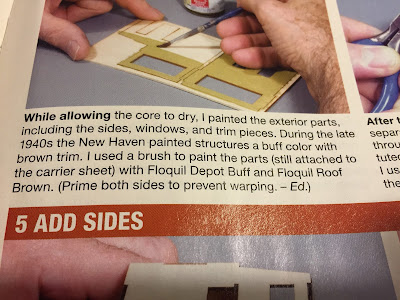 While the New Haven certainly painted its structures in colors other than what I've described here (i.e. red with white trim starting in the 1950s), these paints should give you some pretty good options for what NHRR buildings typically looked like during the 1940s.

Of course, the best guidance I can give beyond what's here is to find photos of the particular structure you're modeling, preferably from your chosen era. Those photos, by far, would be your best reference. But as you can tell from my saga of Saybrook tower, such resources aren't that easy to come by. The colors suggested here will at least get you started.
Posted by Chris Adams at 12:30 AM