I've been assuming - perhaps incorrectly - that everyone knows what Frog Juicers are.  For those that don't know, the skinny is that they route power from your track bus to your turnout frogs, changing the polarity of the frogs automatically to match the polarity of the adjoining track to prevent stalling & shorting. Traditionally, frogs are powered automatically through contacts on a switch machine, or manually through a slide switch, or some such.  With a Frog Juicer, frog power/polarity is done automatically with a minimum of wiring - and done so quickly that even sound-equipped locos don't notice.  If you throw your turnouts manually, the amount of wiring is ridiculously minimal and simple - and with a little looking you can find Juicers for as low as $10/frog.

The most difficult part of installing Frog Juicers is soldering a feeder wire to the frog. Folks that are great at planning ahead will do this at the workbench. I'm not that sort of folk. My turnouts were already installed (to get things up-and-running quickly, natch'), so I was going to have to drill a hole next to the frog, polish the side of the frog with a wire brush (in a Dremel), add flux, tin the wire and frog, then solder.

Or ... get a wonderful, marvelous (and ever-so-slightly masochistic) friend that will do all this for you (thanks again D.O.!).  I know the feeder-attaching process primarily because I did end up having to do it on the new turnouts I installed at the north end of Middletown.  At least I know I can do it myself if I have to.  I'm just glad I didn't have to do it for 30(!) frogs.

But I did have to wire up the juicers themselves - but that's a snap.  Almost enjoyable even.  See below: 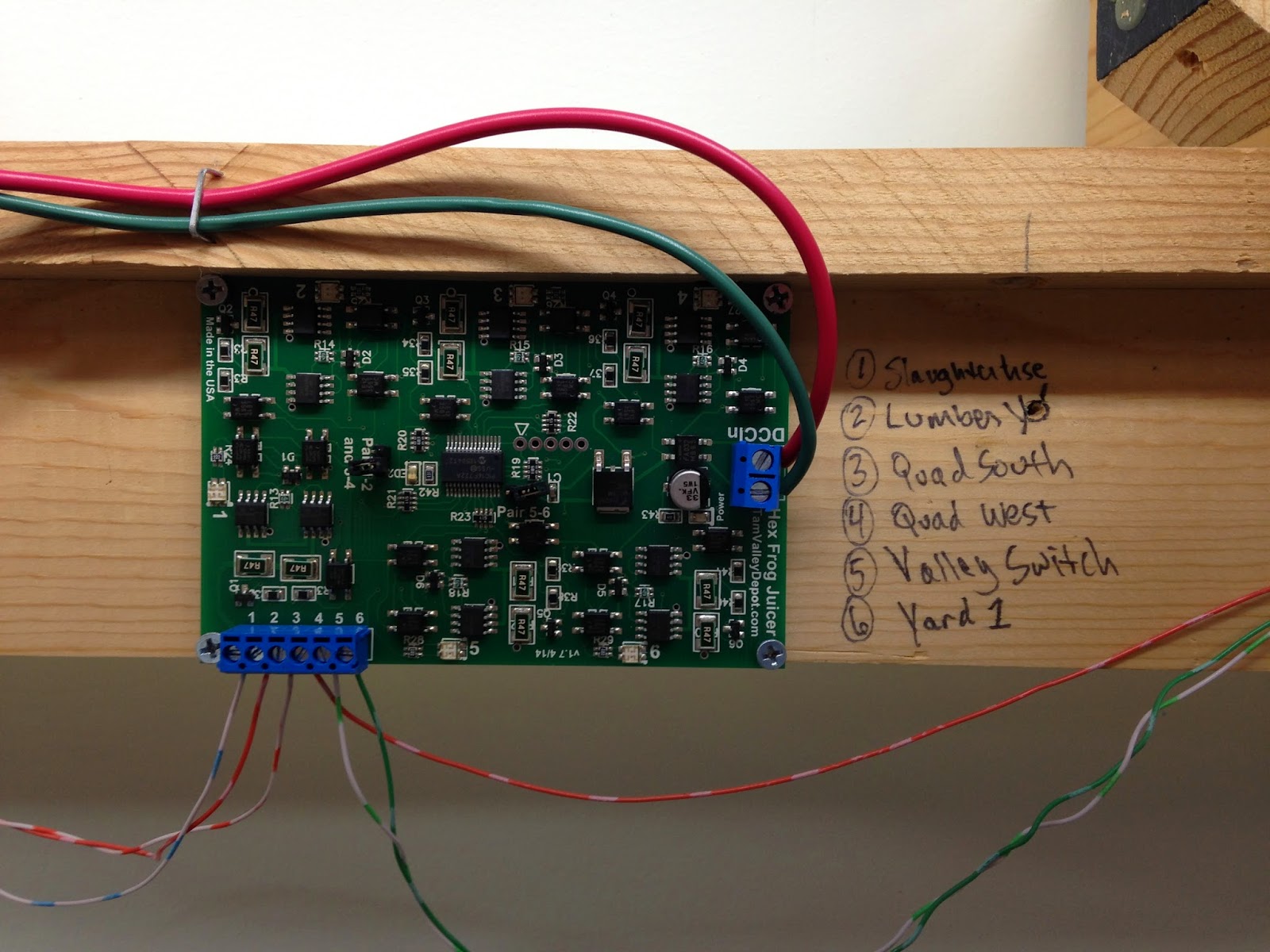 I use L-girder benchwork with girders made from 1x3 webs and 1x2 flanges.  Turns out (I didn't plan it this way - I was just lucky), the 1x3 web is the perfect size for mounting the juicers.  I used four #4 1/2" sheet metal screws in the mounting holes, just pressed/screwed in with a small screwdriver (the pine board makes this easy).  Power gets to the juicer through the wires coming in from above which are #18 stranded, suitcase-connected to the #14 solid track/power bus wires.

Then it's just a simple matter of bringing the (long) feeder wires from the frogs to the little bays at the bottom of the juicer. FYI - frog juicers come in single, double, and "hex" (6 bay) versions.  The most economical (and the ones I got) are the hex juicers - but your needs may vary.  The feeder wires themselves are #24(?) phone wire - very fine - and up to 12' long(!). Yes, that wire size/distance combination results in some resistance, but that's not only ok but preferred with the juicers (allows them to detect shorts more quickly).

And that's really all there is to it! Just don't forget to label the wires for future reference/troubleshooting (see above).

There was just one little glitch I discovered in my plan.  It so happens in the Rocky Hill/Dividend area there are two crossovers.  I figured I'd be clever and save a couple bays on one of my juicers by wiring two crossover frogs to one bay.  Ended up, I was only 50% right... 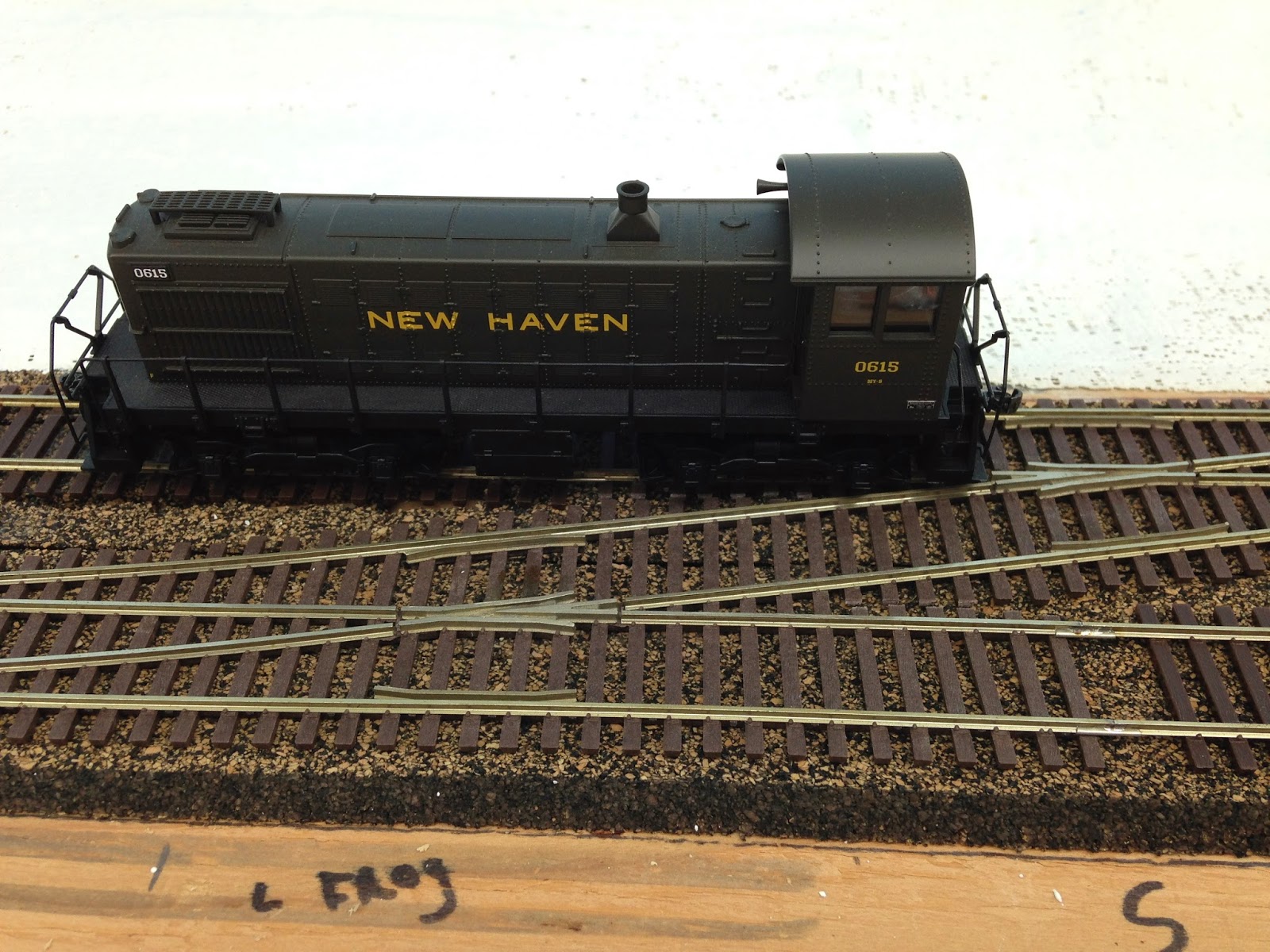 While my K-1b made it through the crossover in Rocky Hill with no problem, the DEY-5 (Alco S-2) kept shorting out.  I discovered the reason quickly enough - the trucks were the same distance apart as the frogs, so as the engine went through the crossover, the first frog changed polarity ok, but when the engine hit the second frog and the second frog tried to switch polarity, the first frog was still occupied and, being wired to the same bay as the first frog, resulted in a short.

So I had to use 1 bay per frog in Rocky Hill. 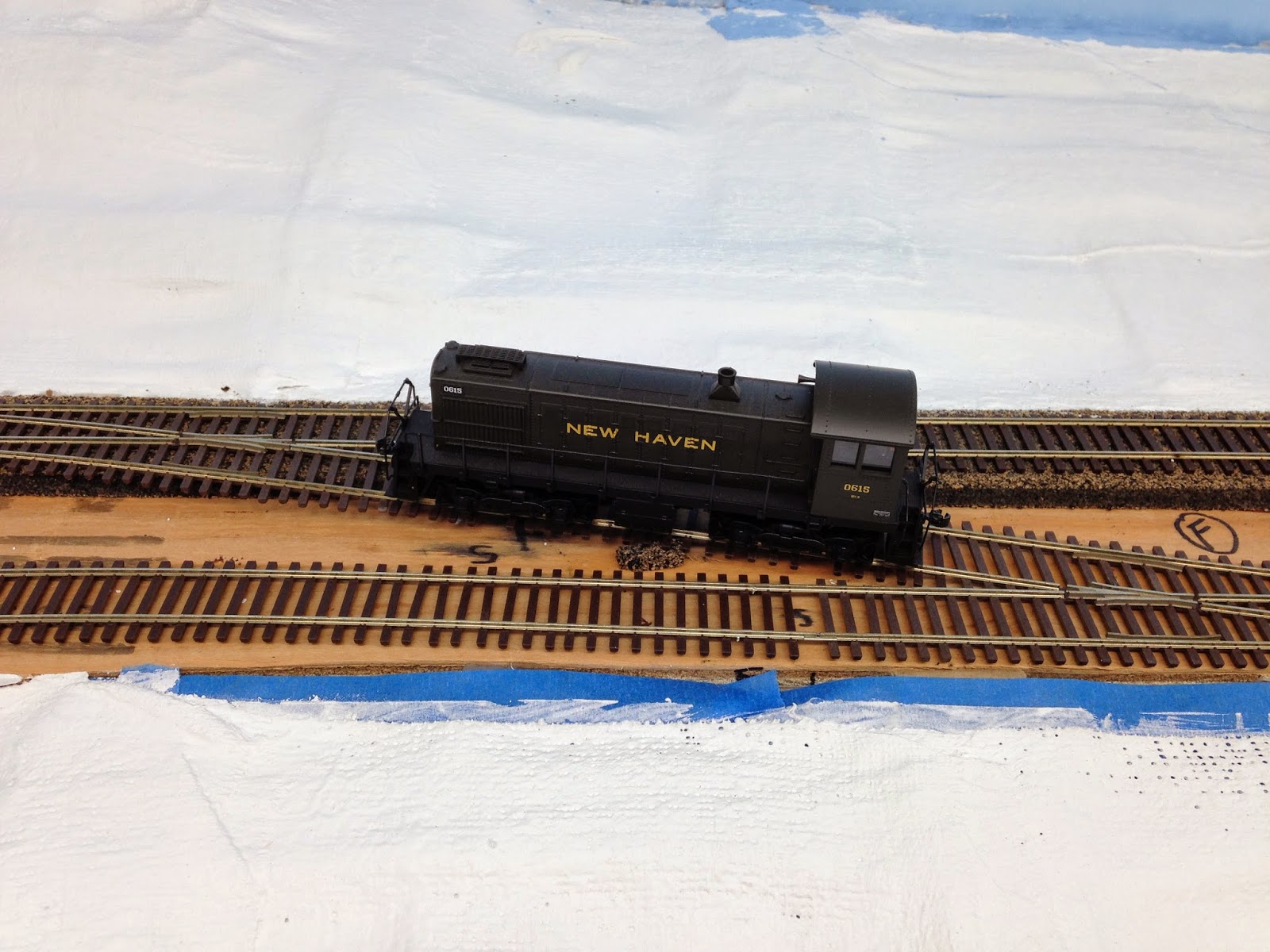 Fortunately, the crossover at Dividend worked as hoped & expected - the difference being the distance between frogs (see above). I haven't yet tried my longest loco (R-1 4-8-2) on this crossover to see whether I'd run into the same problem (I expect I would), but since it's unlikely I'll ever use that engine to switch that crossover, I'm happy to wire the frogs together for now.

And remember that I typically run only one train at a time on the Valley line.  I wouldn't recommend this approach for a crossover on a two-track mainline, for example.

So if you don't plan to add switch machines to your turnouts, and you want electrical continuity through said turnouts to be absolutely bulletproof, listen to your frogs.  That croaking that you think is coming from your cutting-out sound decoder may just be your frogs telling you they're thirsty and want some juice.
Posted by Chris Adams at 1:38 PM