Given this week's Wordless Wednesday post, and the fact that I haven't posted about my DEY-5 build since March 22, I guess I'm not very good at build logs. As you saw on Wednesday, the 0604 is all done, except for some painting touchup and weathering (and some final dialing-in of the decoder programming). But rest assured 1) I will continue to document the build here, if for no other reason than 2) I'll be starting on DEY-3 #0967 next - and it'll be good to jot down what I did on this build so that I can remember it for the next build.

And I'm hoping the DEY-3 project will be documented much more contemporaneously with the actual build, and will include more detail.

At least that's the plan.

But for now, for my own reference, and for those of you that are interested in how the DEY-5 came together, read on and stay tuned...

After adding the grabs to the hood (see the end of the last post for where I left off), I used the cast-on NBWs on the back of the resin cab as a guide for where to drill the holes for the little grab iron next to the rear headlight, as well as the long, vertical handrails on either side of the cab door.

With the "robust" details done (I decided for the moment to hold off on the special whistle assembly and cab signal box, both of which I learned later would be robust enough), I decided the next step would be to paint. 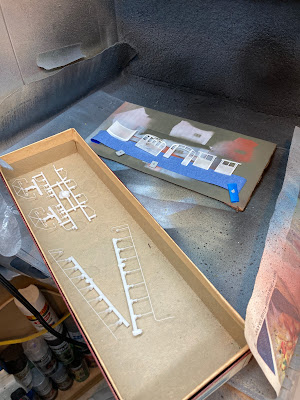 As you see in the photo above, I decided to paint the cab before assembly, figuring it would be too difficult to paint the inside or to add windows once the cab was put together - and much easier to decal/letter. But this ended up making final assembly more stressful than it needed to be, and it turned out I still needed to do some additional touch up anyway. For the DEY-3, I'll assemble the cab first.
The first step in painting is to prep the parts. I used isopropyl alcohol (70%, I think) and gently brushed the parts with an old toothbrush. After that, I only handle parts with gloves on. 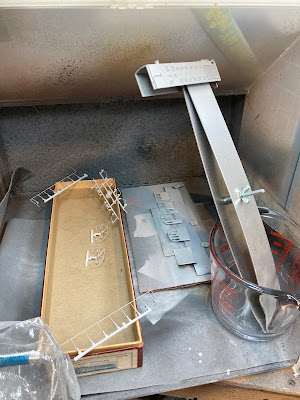 Once everything was nice and dry (I think I left everything overnight, though didn't really have to since the alcohol dries quickly), I gave everything a coat of Tamiya Fine Surface Primer to even things out (especially the 3D printed resin cab, which still had some very faint striations from the printing process) and give everything, especially the metal grabs and slippery plastic handrails, some good "tooth" for the paint to hold on to.
According to the research, the DEY-5s were all delivered in Pullman Green, with black railings, frame, and trucks, and lettered with Dulux Gold (yellow) lettering. Now, there is MUCH debate over what model paint best replicates the New Haven's Pullman Green - and I've seen models painted in shades so dark they're almost black to lighter shades that are closer to the NH's Hunter Green. Tru-Color Pullman Green was recommended to me, so that's what I used. I think it looks great - especially under my lighting and on my layout - but it's noticeably lighter than the NHRHTA's special run of Atlas S-2s (which used paint based on an actual prototype color chip from the NHRHTA's Color Guide). 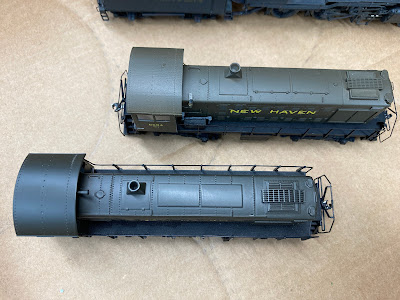 For the railings, I used Tru-Color Black - a much easier choice. And don't forget to shoot the bell and coupler box covers with the black as well. 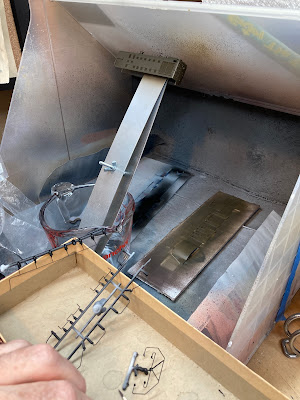 This is only the second locomotive I've ever painted - and the first was way back around 1986. Heh - it was also an Atlas S-2, IIRC. I even used the same airbrush - a Badger 200 (the Choice of the 80s). This 'brush is super easy to use - it's basically a glorified spray can. The trigger is only on/off, but at least you can adjust the spray pattern. I thinned the paint 3:1 (paint to Tru-Color thinner), adjusted the pattern to about 3" diameter at 6" away, and remembered to trigger on/trigger off past the piece.
Results below: 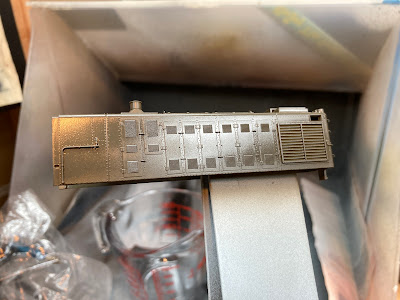 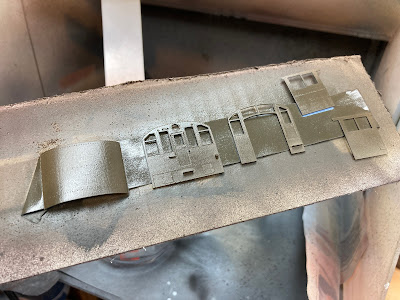 Not bad for my first attempt, although the finish wasn't quite as smooth as I'd hoped. I learned that this "orange peel" effect can happen if you spray from too far away. The paint dries a bit before it actually hits the model. I really didn't want to strip it though, so I decided to try and even it out with an additional coat of paint. 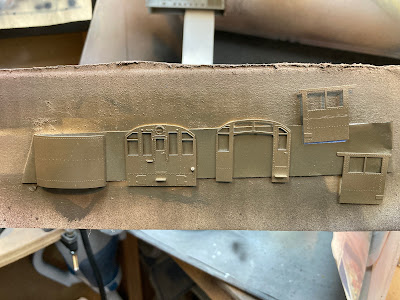 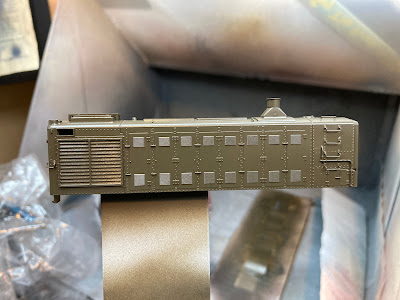 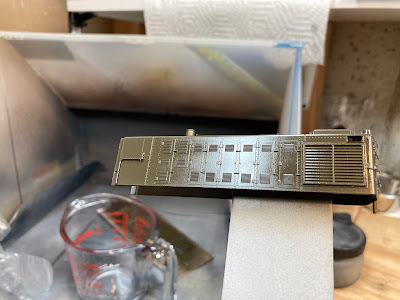 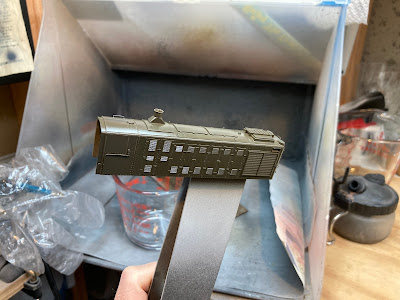 I don't know if I just got lucky, or if this is a typical way to save an orange peel finish, but it worked! It's admittedly not as perfectly smooth as a factory-painted model, but I'm happy with it - especially considering how bad it could have been. Heh - and I'll be weathering the loco eventually anyway, so there's always that. As long as it's smooth enough for decaling, that's good enough for me. 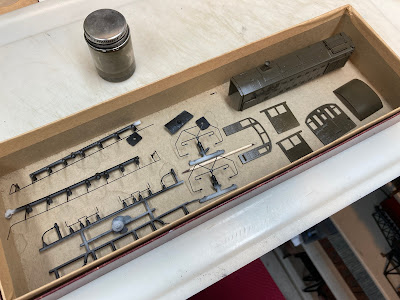 With the painting done, I set everything aside to dry thoroughly before continuing. Given my work schedule, I think this ended up being about a week. At least I knew the paint was adequately cured!

That's it for now - As always, please be sure to chime in with guidance, advice, and anything you'd have done differently.

Next time - Applying the new, custom-made (and now available to you) decals!