Taking a cue from my "accomplishments & goals" post at the beginning of the month - and figuring this will be a great way to hold myself accountable & give me a huge dose of motivation - here's what I have to report as progress during this most modeling season of modeling season months . . .

All but the figure painting were/are on my "2022 goals" list, so I'm starting the new year with a LOT of wind in my sails (and with the added motivation that Busy Time at Work starts Feb. 9 . . .)
Li'l Lionel 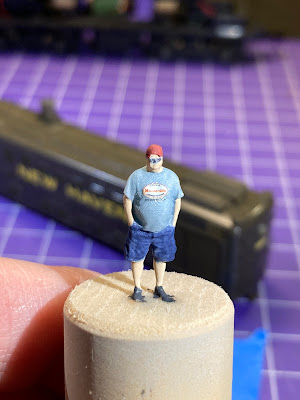 Folks over at the Valley Local Facebook Group (if you're on FB, be sure to join!) know about Lionel Strang's A Modeler's Life Podcast and his support of the Princess Margaret Hospital. This year, in addition to his fundraising walk, Bernard Hellen over at MiniPrints decided to offer this 3D scan of Lionel as an additional incentive to donors. Mike Budde even provided "Modeler's Life" decals to go on his shirt! The figure comes unpainted, and this was my first-ever attempt at figure painting. I think it came out pretty good - even the decal! By the way, this is 1/87th scale. He's glued to a wine cork for ease of handling - and that's my finger on the left. Talk about teeny tiny!
As soon as I shoot him with some Dullcoat to seal him, he'll come unglued and start riding the Valley Line!
Hartford Rayon Foundations 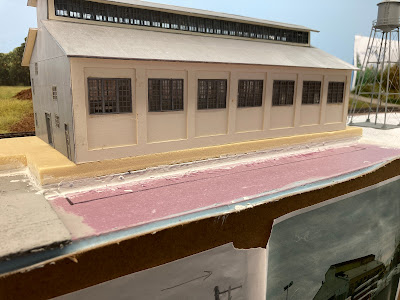 
Rocky Hill Backdrop
Long time readers know that I have a love/hate relationship when it comes to backdrops. I love the fact that they're "instant scenery" - but hate the work that they require. I take all my own backdrop photos in the area I'm modeling (being lucky to live near my prototype) and stitch them together using Photoshop Elements.  It seems I can never quite get the photo(s) I want/need and even my stripped-down version of Photoshop has a bit of a learning curve.  But I for some reason this month I really got the bit in my teeth to tackle the backdrops in Rocky Hill and even (gasp!) Wethersfield . . .

Wethersfield Backdrop
Ah yes - the notorious "Wethersfield backdrop" - the bane of the Valley Line's north end for years. I've mentioned before what a mental roadblock it's been since I know how the area is "supposed" to look during my era, and there's no way I can figure out how to replicate that. Well, not and have any time to do anything else in the hobby . . .
So I've finally decided to avoid making the perfect the enemy of the good and take an "impressionist" approach. No, not that - but just doing a backdrop that gives the impression of what I want to convey: Fairly flat former farmland, with a bit of autumn trees. Bonus if the terrain tilts up a bit toward the west (away from you & the aisle). Bigger bonus if the roads-into-the-backdrop look at least plausible for the area - and era. So I decided to experiment in earnest. . .

The last thing I did today was tape up the Wethersfield backdrop. It's quite a milestone to have gotten this far with it - finally. But it's not giving up without a fight . . . there's still a bit of obsessing left to do . . .
I can't figure out exactly where to place the backdrop vertically. To compare, I've taken 4 photos from the viewpoint of an HO scale figure. What do you think? (as always, you can click on the image to enlarge it) 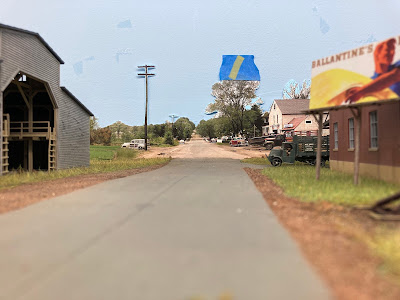 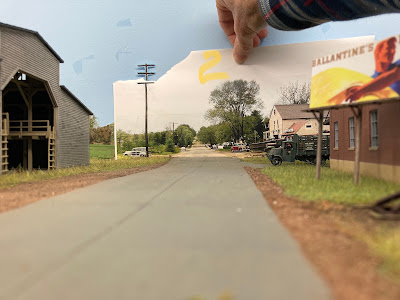 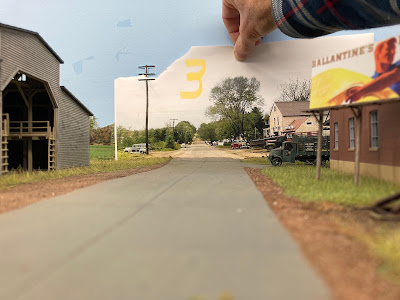 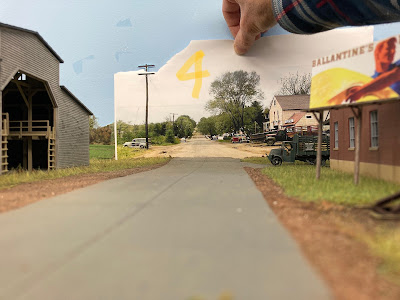 While I can make persuasive arguments for/against any one of these positions (heh - welcome to the inner world of the obsessive. And I'm a lawyer on top of that. Pity me), I haven't decided which looks best and/or which one would provide the best basis for further blending/disguising with bushes, trees, and colors. For reference, the truck in the photo is the tiniest bit undersized from HO (an HO scale truck is in front of it).
I'm not too worried about the difference in color between the foreground & background roads - I'm confident I can deal with that. Also, with regard to the shoulders: if needed, I can either disguise/blend them with shrubbery or modify the existing scenery to "pull them forward" into the 3D scene.
I guess the main thing is to figure out what looks best from this perspective (considering future model photography) - while freely acknowledging that that might not look the best to viewers standing in the aisle (and over 100 scale feet above the scene).
Heh - unlike Rocky Hill, it's clear I can't call the Wethersfield backdrop done yet, but I sure have made some significant progress on it! And once I figure out final positioning, it's just a matter of gluing it to the masonite . . . and creating the REST of the backdrop south (left) to Goff Brook.
Thankfully, I'm still in "backdrop mode" - and I don't want to forget (again) all the Photoshop tools I've learned - so I'll keep at it until it's DONE!
<><><><><><><><><><><><><><><>
If you've made it this far, thanks for hanging in there! Like I said, I'm going to try and do at least weekly updates so I (and you) don't have to suffer through marathon posts. But I like to keep track of my progress - if nothing else, doing so reminds me not only that I have actually accomplished something on the layout but also spurs me on to accomplish even more.
Here's hoping you're able to take advantage of these winter weeks and make some progress on your projects as well. And if you do, be sure to let us know in the comments below!
Posted by Chris Adams at 7:58 PM