The beginning of a new year is a common time to take stock of where you've been and where you'd like to go. Such an assessment is a common pathway to progress and further accomplishment. And, if you think about it, one's hobby could benefit from the same sort of looking back and looking forward - especially if you discover (sometimes to your pleasant surprise) that you learned more and got more done than you thought you did.  But even if you didn't, going through the exercise often provides at least a little shot of motivation.
So, without further ado, here's where the Valley Line was - and where it is. And, with a little motivation, where it may be heading...
The first thing that occurred to me as I reviewed the past year was how little I actually posted here on the blog:

That's way less than half of my usual number of posts for the year, but for good reason. I started a new position at the end of 2020 which has required a lot more of my time - and taken time from the layout. And an axiom of blogging is that if you don't do it you can't write about it.
So in 2022 I hope to do more on the layout - and more posts should follow.
Speaking of doing more on the layout, while 2021 wasn't quite as productive as 2020, I did get a few things done... 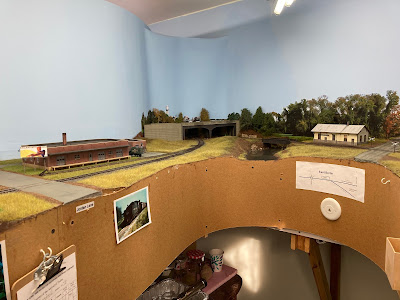 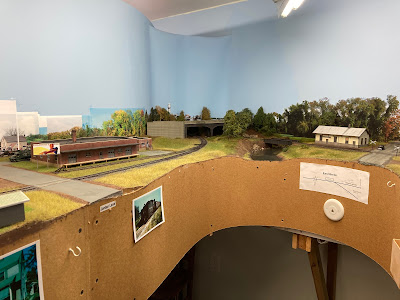 The north end of Wethersfield got some additional layers of scenery, including a few trees - some more ground texture - and even some photo backdrop.  Well, at least a start. The lack of a backdrop in Wethersfield has been a persistent frustration for years. Literally. Hopefully 2022 will see this finally get done. 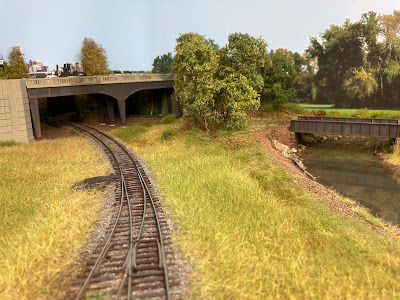 Here are a some closer views of the additional work in this area (thanks again to Jim Dufour for the the tips & guidance). 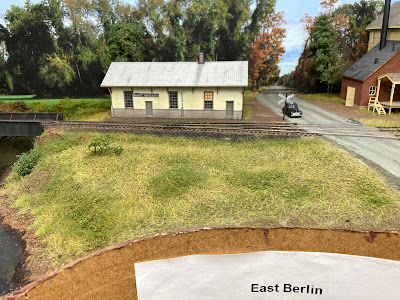 As you can (hopefully) see, while a base layer of static grass certainly is better than nothing, the more variety & texture you add, the better it looks. 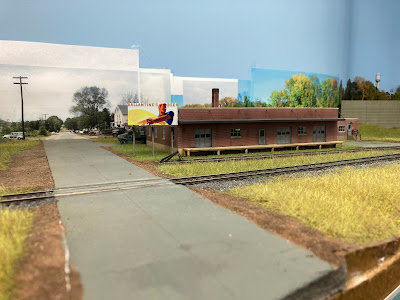 Here's the current state of Ballantine's Beer Distributors - but I included this photo mostly to show more of the photo backdrop in progress, including a colorized historic photo that I'm using to finally address how to deal with Jordan Lane going into the backdrop. While I've blogged before about this technique, I'm hoping to have a more in-depth article on the process in one of the modeling magazines soon. Stay tuned! 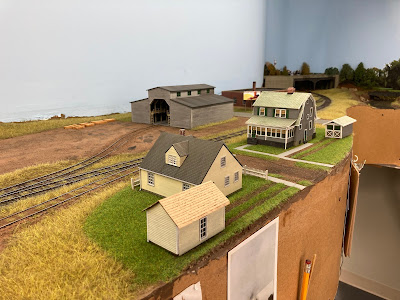 Here's how the Fernwood Street/Lumber Yard area looked at the beginning on 2021 . . . 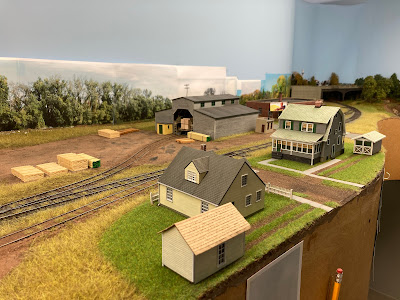 . . . and how it looks today. Just a few added details, but you can really see what a difference a backdrop makes - even if it's only just mocked up.
I've learned that one of the biggest sources of anxiety and reticence in doing the Wethersfield backdrop is that I know way too much about how it ought to look - and I find it difficult, if not impossible to recreate that. But one way I've discovered to get over that anxiety is to do a backdrop in an area has no such baggage and is just freelanced. 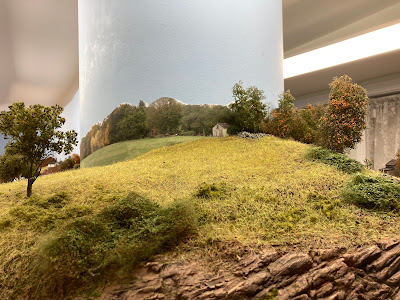 This is a transition area at the end of the peninsula between the Goff Brook scene and Rocky Hill. "All" I wanted to achieve here was a generic New England farm scene in autumn & to provide some "resting"/open space for the operators as they go from one aisle to another. I'm pretty psyched how it came out (I've since blended out the white border at the top) and it was actually pretty fun to do too. It's amazing how much fun you can have when you're not putting so much pressure on yourself... 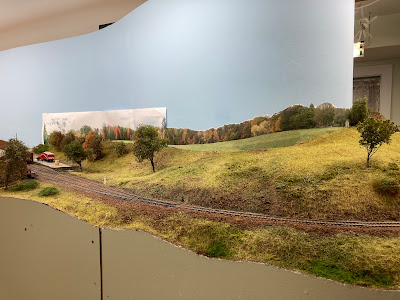 This is what you see as you step back and pan left. Huge thanks to Bill for showing me a tool in PhotoShop that allowed me to "pull" the treeline down to match the hillside. Not knowing how to do that kept this part of the backdrop from getting done for months.  You can make out the additional mockup in the distance. 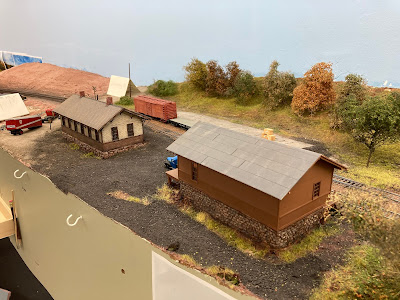 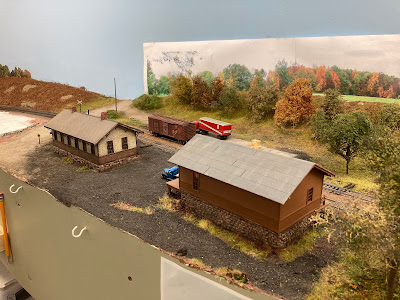 . . . and how it looks today. Yet another example of the "instant scenery" and improvement that a backdrop provides. 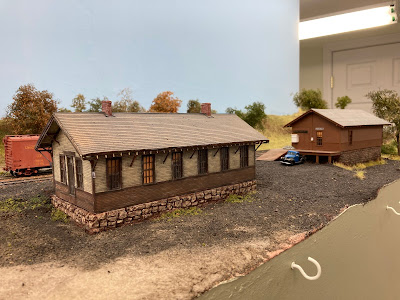 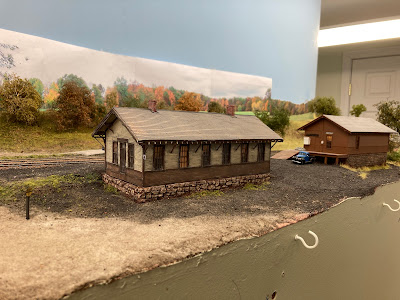 The most significant improvement on the layout since last year though has to be the Dividend section of Rocky Hill. Here's how it looked at the beginning of 2021 . . . 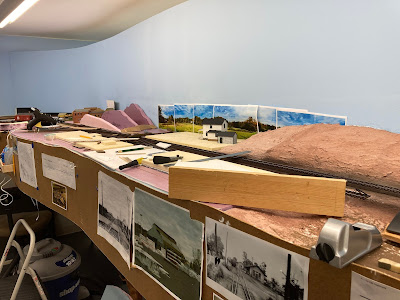 I'd flattened the terrain a bit and had started to create a scenic block/hill/cut at the far (left) end of the scene. 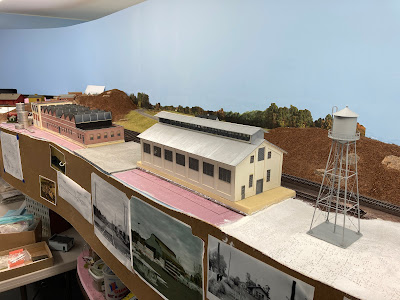 And this is how it looks today - backdrop and start of scenery done. 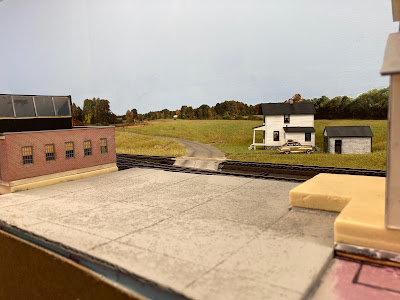 If I need any extra motivation to continue doing photo backdrops, this scene provides it. 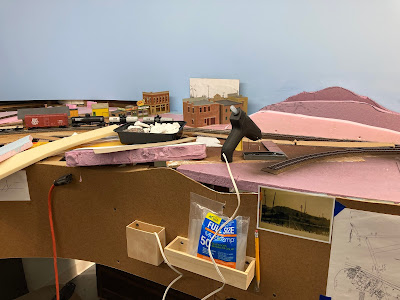 Other than a bit of photo-backdropping and more static grass, the major new scenic skill I acquired this past year was doing a rock cut. Here's the start of it as the south end of Dividend - creating a scenic divide from Cromwell (to the left). 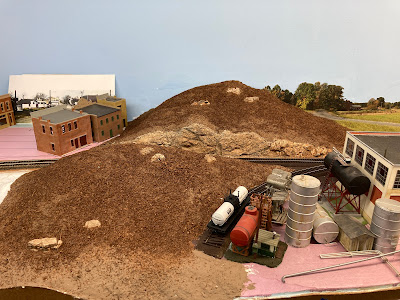 And here it is as it sits today. Lots of scenery left to do here, but I'm really happy with how it came out.
Taking a break from "pure scenery" (land forms, vegetation, and such), I've also started to try and do something better with Middletown. Here's the north end of the yard last year . . . 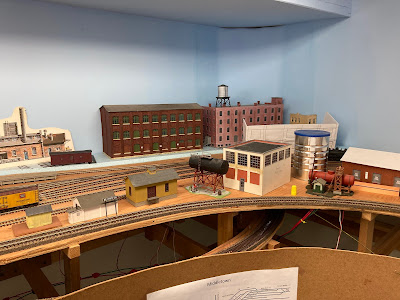 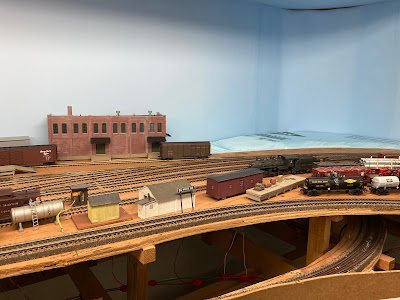 In keeping closer to the prototype, I did some terra-forming in the corner in anticipation for starting a transition from town to country. The north end of Middletown yard in the late 1940s was really on the outskirts of town and the scenery will now reflect that. I also found a good place for the imagineered structure I built and was going to use for Stanley Chemical before I got Bill Maguire's structures in East Berlin.
Moving south into the town proper, I'm finding it a bit difficult to figure out the right amount of structures. Here's how things were mocked up last year... 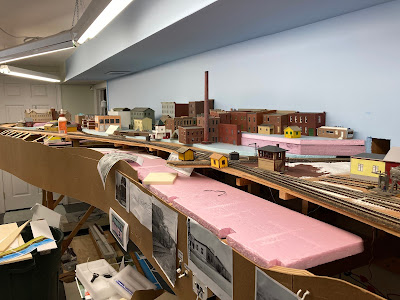 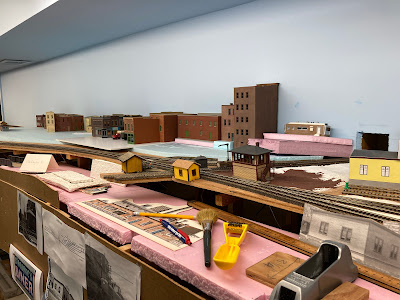 Still really unsure where this will all land. Maybe installing a photo backdrop here first will help :^)
Unfortunately, there hasn't been any significant progress on the rest of the layout during the past year. But one thing I *did* do - after much persistent prodding by my friend Dean - was to at least paint the foam board . . . 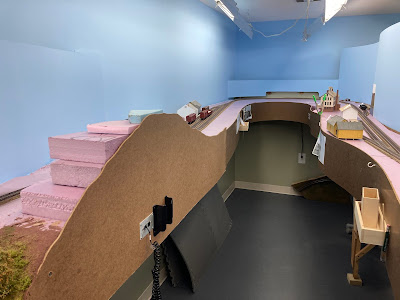 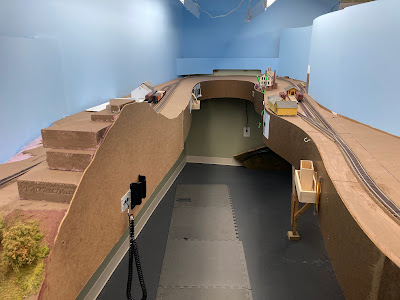 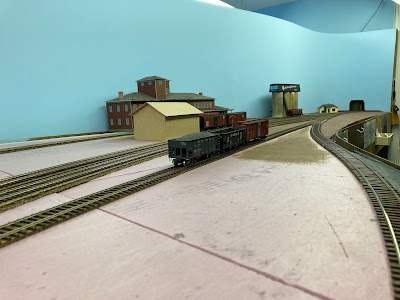 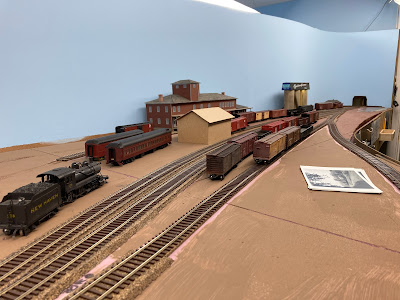 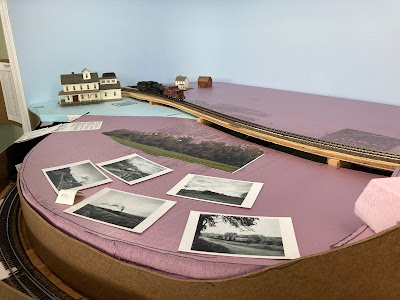 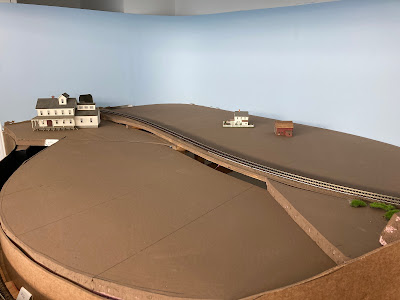 After resisting his prodding for months - if not years - I finally got around to it. Took less than 2 hours of easy work with a roller and is probably the best bang for the time I can imagine.
Comparing last year's photos to the same scenes this year has really given me a kick in the pants to have more progress to show this time next year. But if that's going to happen, I have to remember two important things:
I've made a bunch of layout-related New Year's Resolutions in past years, but I think for 2022 if I can just internalize these two deceptively simple but powerful thoughts I'll make more progress in the coming months than I have in a long time - and will be sure to report it here. Hopefully you'll enjoy continuing to follow along - and will have your OWN progress to share.
In the meantime, here's wishing you and yours a healthy, happy - and productive - New Year!
Posted by Chris Adams at 7:12 PM

Email ThisBlogThis!Share to TwitterShare to FacebookShare to Pinterest
Labels: Goals